Henrika Tornberg was the first female staff member to work at Lund University Library. In her capacity as assistant clerk she compiled more than 100,000 card entries in what was then a new library catalogue, Katalog-1957, which is still in use today.

Henrika Tornberg was born in 1847. She was the fourth child born to a family of six daughters. Her father was Carl Johan Tornberg, professor of Oriental languages who was the leading expert in Arabic language and literature of his day. Her mother was Hedvig Svanberg, the daughter of a mathematics professor. Henrika Tornberg’s childhood home was thus seriously influenced by learning – nevertheless, despite this, it remains unknown whether she and her five sisters were ever formally schooled.

Henrika Tornberg attended Nathalie Zahle’s well-reputed institute in Copenhagen were she took a course for female handicrafts instructors. She then returned to Lund and in 1880 she gained a post as a handicrafts instructor at the girls' school Lunds fullständiga läroverk för flickor. Henrika Tornberg was well-liked by both the students and her colleagues, one of whom, Selma Colliander, later followed in her footsteps by working at the university library. Henrika Tornberg retained her post at the girls’ school even after beginning her service at the library. It remains unclear whether keeping both jobs was a reflection of the meagre salaries women were paid or whether it was simply a personal choice.

At the time that Henrika Tornberg was appointed assistant clerk, Lund University Library was a male-dominated working environment and employed a work method that was in many ways old-fashioned. It was during Henrika Tornberg’s 26-year-long period of service at the library that the institution underwent its first major modernisation. Elof Tegnér, the newly-appointed head of the library, introduced the adoption of new academic standards by transforming the out-of-date bound catalogues into a modern card-catalogue, to facilitate both its use and the process of updating it. It became Henrika Tornberg’s life's work to undertake the compilation of the cards for this new catalogue. More than 100,000 of her beautifully calligraphic yet legible cards form the basis of the Lund University Library card catalogue, which now goes under the name of Katalog-1957. At the turn of the twentieth century this catalogue was considered to be the best in Sweden. It is still in use today, in 2020.

Henrika Tornberg’s other duties at the library included checking and indexing the legal deposits and exchange material sent from other university libraries in Sweden. During the first twenty-year period of her service, from 1886 to 1907, the university library was quite overcrowded: there was only one office which was the domain of the head librarian. All the other staff thus had to undertake their duties in the reading room. There are several photographs from the time, including some published in Svenska folket genom tiderna: 10, published 1938–1940, which show Henrika Tornberg sitting alone working at a table beside the window, whilst the larger tables are occupied by renowned male professors, such as Axel Moberg, Ewert Wrangel, and Hans Hugold von Schwerin. In 1907 the library moved from Lundagård to its current location in the main building at Helgonabacken, which meant that new spaces became available for the staff. Henrika Tornberg remained the sole female staff member, however. It would not be until the year after her death, in 1913, that the next female staff member was hired, namely the aforementioned Selma Colliander, her former colleague from the girls’ school.

Henrika Tornberg spent her whole life living in Lund, staying near her parents and sisters. Very little is known about her life outside of work. She never married and she never had children. Following her death in 1912 she was described in the girls’ school’s annual publication as well-loved and kind-hearted. The hand-written library card-catalogue she created came to serve as her own living memorial. She is buried at Lunds Östra kyrkogård (Eastern cemetery). 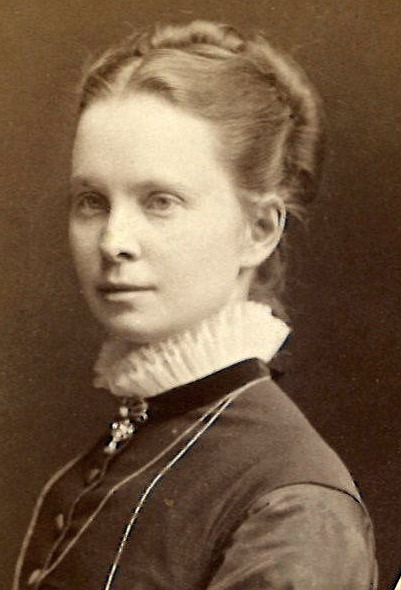