Hertha Bengtson was a successful designer. She designed tableware, which was innovative in both form and function.

Hertha Bengtson was born in Ysane in Blekinge and grew up on a farm with her four brothers. Her parents were Henning and Asta Bengtson. Her father was a jack-of-all-trades and ran both a mink farm and a shop alongside his farm, which was the least of his interests. Her mother, to whom Hertha Bengtson was very close, was a skilled weaver. Hertha Bengtson's interest in textiles and handicrafts came from her mother. From her grandmother she inherited Scanian country textile knowledge and from her grandmother’s neighbour she learned to tat the Scanian way, without patterns.

Upon completing her education at a girls’ school, Hertha Bengtson wanted to become a drawing teacher. However, there was no money to continue her formal education. Hertha Bengtson achieved top marks in drawing and handicrafts and therefore gained a place as a handicrafts teacher at one of the region’s elementary schools. During her time at the girls’ school, she had also taken evening classes in porcelain painting. In 1937 she applied to Hackefors’ porcelain factory in Linköping where she became employed as a pattern designer. Hertha Bengtson was interested in all aspects of the factory and when the men were called up for military service at the outbreak of the Second World War, she became head of her department at age 22.

Hertha Bengtson wanted to create her own porcelain. She applied to and became employed at Rörstrand’s porcelain factory in 1941, where she started as a pattern designer but quickly became a master designer. Hertha Bengtson’s ability to combine beauty with function was fundamental to her success as a designer. Her breakthrough came with the innovative blue-and-white tableware called “Blå eld” (blue fire) which was produced from 1951 to 1971. “Blå eld” broke several conventions. There were fewer pieces in the tableware set than usual, and the blue colour was not decorative but covered the whole piece as did the embossed pattern of the design. The plates were oval instead of round and lacked an edging. The shapes of the various bowls were just as unconventional as the colour scheme. Those pieces used for eating and drinking were white while other pieces were blue: the white teacup came with a blue saucer. “Blå eld” was elegant and delicate and became very popular as well as widely exported, including to the USA. The tableware became a popular wedding gift and later a much sought-after collector’s item.

The next design, known as “Koka Blå”, was produced from 1967 to 1988 and was revolutionary in a different way. As it was ovenproof, the pots and serving plates could be used on the hob or in the oven and then placed directly on the table. Hertha Bengtson actively promoted the tableware and presented it to housewives’- and women’s associations. She wanted to change everyday meals by including more vegetables and giving women a simpler and faster method of preparing and serving food. In 1956 Hertha Bengtson received a gold medal for “Koka Blå” at an exhibition in the Italian pottery town of Faenza and in 1961 she received the “God Form” award from the Svenska slöjdförening (Swedish Society of Industrial Design). Hertha Bengtson created a total of six dinner services for Rörstrand as well as unique items of stoneware. In addition, she put together exhibitions on behalf of Rörstrand in Sweden and abroad. She left Rörstrand in 1964, when the company was acquired by Uppsala-Ekeby.

Hertha Bengtson subsequently began to work at Höganäs-Keramik, where she tested the viability of stoneware with regard to tableware services. The first service she made out of stoneware was the hand-turned set “Jasmin”. Once again she was innovative. She replaced the traditional dull stoneware glaze with a smooth brownish black and colourless grey. She won yet another gold medal in Faenza in 1966 for “Jasmin”. Her next tableware design was called “Höganäs Top”, which was formed from a new kind of earthenware to make it dishwasher-safe. Further, there were new large plates without edging, which could hold all the food at once. While working at Höganäs-Keramik, Hertha Bengtson also created “Presenta”, a coffee and tea set complete with candlesticks, which could even be used as egg cups or vases for flowers when turned upside down. The stoneware was elegantly decorated with a broad band of gold. After four years of working at Höganäs-Keramik, Hertha Bengtson quit, probably due to differences of opinion with regard to the verbal agreement that had been reached when she was initially hired.

Hertha Bengtson’s experience in stoneware production proved to be very useful in her next job. She was offered a contract by the Rosenthal group in 1969, which initially involved collaboration with the Thomas factory in Germany. She created the bestseller “Scandic” for Rosenthal in 1970, for which she yet again won the gold medal in Faenza. It was produced in what was then a new material called cordalite, which was hard, dense and heatproof. The tableware thus could include fireproof pots and pans, which was an innovation on the German market. Hertha Bengtson created in total six sets for Rosenthal. The last one, called “Family”, was released in 1983. The set was white with either a blue or a green rim, of a simple shape and the various parts could be used in many different ways. “Family” was exhibited at the Hannover fair and gained distinction for its good shape.

In addition to creating porcelain, Hertha Bengtson created tablecloths for several years at Mölnlycke AB. The idea was that the cloths would accentuate her porcelain. She also furnished and chose the colour schemes of factories and offices in collaboration with the journalist Willy Maria Lundberg and served as her exhibition designer at Träslottet in Arbrå from 1969 to 1979. From 1976 to 1981 Hertha Bengtson created sanitary porcelain for Ideal-Standard Europe. In Germany she also developed table- and ornamental-glasses. In the summer of 1980 she travelled to the glass factory Pilchuk in USA in order to learn more about glass production. In 1990 she created a unique kind of glass in an independent project, producing playful glass in simple shapes and strong clear colours, blown in Strömbergshyttan in Småland.

Hertha Bengtson’s output attracted both interest and success. She held six separate exhibitions and participated in the Swedish Society of Industrial Design’s exhibitions in Sweden and further afield, such as in London, Cologne and Munich. 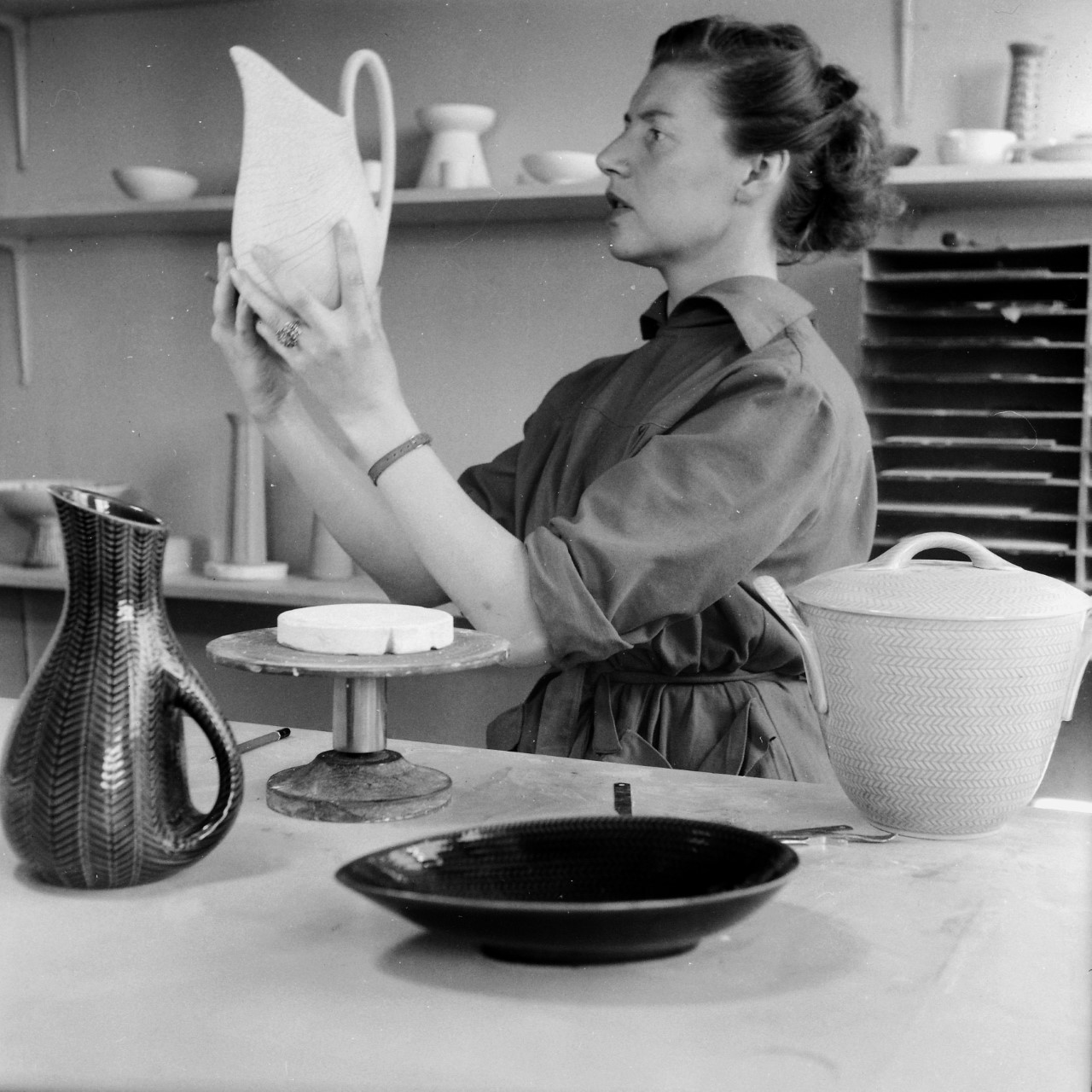