Augusta Tonning was a suffragette and a teacher. She ran a school for girls near Falun, a garden centre in Ronneby, and she campaigned for women’s suffrage throughout Sweden.

Augusta Tonning was born in Lund in 1857. She was born Hilda Augusta Grönvall. Her father, Johan Henrik Grönvall, was a teaching assistant. Her mother was called Julia (Julie) Lovisa, née Adrian. Five years after Augusta Tonning was born her father was appointed parson in Västra Tomarp near Trelleborg and the whole family moved there. Augusta Tonning had three siblings: two brothers, Johan and Edvard, and a sister named Elin.

Augusta Tonning grew up in a happy home. She received a conventional upbringing in which women were apportioned predetermined roles: daughters should marry and procreate. However, Augusta Tonning was a bold and independent woman. According to some sources she fostered dreams of becoming an artist during her youth. She was a wood-carver and one of her carvings can still be seen in her house, Solvik, near Ronneby. Her elder sister, Elin, tried to persuade Augusta Tonning to become more “pliable and tender” so that she might better fulfil the contemporary ideal of a woman. Augusta Tonning wrote in her diary, at Villa Solvik: “Then Pär Tonning arrived, playmate and friend from my youth, the ideal, bringing with him a fresh, healthy and free lifestyle where understanding and personal will was allowed to rule in direct opposition to the old predetermined powerlessness. It was a wonderful life”. Their love lasted for the rest of their lives.

Pastor Grönvall married both of his daughters at a double-wedding in Västra Tomarp church in July 1879. Elin married Anders Bendz, town curate, and Augusta Tonning married Pär Tonning, an undergraduate student in philosophy. Pär Tonning belonged to a reputable Scanian farming family in Tomarp. In 1877 he gained a post as director of a newly-opened folk high school called Hvilan in Åkarp, Scania. In Pär Augusta Tonning had found that rare thing: a soulmate. He was liberal-minded, radical, and socially aware. He was also six years her senior. She looked up to him and shared his idealistic view that men and women should work side-by-side in order to improve society.

The couple resided at Fornby folk high school. They were keen to see girls gain access to classes from an early point. In the spring of 1882 Pär Tonning was given permission to use the premises to teach girls who had been confirmed. Augusta Tonning instructed these girls in mathematics, accounting, and handicrafts. However this enterprise never became a proper school.

In 1885 Pär Tonning resigned. He had realised that his ideas were not acceptable to the establishment. He had already purchased a property called Hästberg near Falun in 1883 and initially he intended to move his educational enterprise for girls there. However, the couple opened a private school for girls instead, named Hästbergs qvinliga folkhögskola (folk high school for girls). Augusta Tonning taught handicrafts, including sewing, weaving, and wood-carving, as well as mathematics and book-keeping. The wood-carving lessons were an extension of her personal interest. The Tonning couple also engaged in small-scale farming at Hästberg, in which they had the help of a foreman. The intention was to instruct the girls in various farming activities in order to help them become fully qualified housewives and proper farmer’s wives.

However, Pär Tonning began to display signs of ill health. He became bedbound and unable to work and spent lengthy periods at Lund hospital. He was unwell for ten years, during which time Augusta Tonning became increasingly responsible for running their enterprise and in the end she took over completely. The girls’ school had already closed by 1887. Augusta Tonning handled all the traditionally ‘male’ duties herself. She negotiated with forest owners, drove loads of timber through town, and ploughed the fields. The burghers of Falun did not take kindly to her activities.

Pär Tonning died on 7 June 1895. His belief that women were equal to men remained strong in Augusta Tonning until her own death. In the many speeches that she gave as a suffragette she often quoted her late husband. Augusta was 38 years old when her husband died. They did not have any children.

Three years later, in 1898, Augusta Tonning sold up and moved to Blekinge where her brother Johan Grönvall was serving as regimental physician. He lived with his wife and three daughters, Karin, Ella and Lisa, at Härstorp farm near Ronneby. When Augusta Tonning moved into Härstorp her nieces were aged between seven and fifteen and over the years they came to occupy a special place in her heart. Augusta Tonning had a horse and four cows at Härstorp. She set up a commercial garden and began to cultivate on a major scale, using a horse and cart to transport her vegetables to Ronneby town square where she sold them.

During the summer of 1902 Augusta Tonning attended Nordiska kvinnosaksmötet (Scandinavian women’s rights meeting) in Kristiania (now Oslo). Her interest in women’s rights escalated. Her belief that women should be full, legally independent citizens who were equal to men and should enjoy the same rights and the same obligations became her new life’s work. Her first goal was universal suffrage. In 1902 and in 1903 the first Föreningen för kvinnans politiska rösträtt (FKPR) (association for women’s suffrage) was set up, followed by the national organisation Landsföreningen för kvinnans politiska rösträtt (LKPR). Augusta Tonning adopted the suffrage campaign with great gusto. By 1903 she had already founded a suffrage association in Ronneby. She would ride around on her horse, suitably named Rösträttskampen (“suffrage campaign”, ‘kamp’ also being an old Swedish word for horse), through the villages of Blekinge setting up associations, sometimes with only ten members. When no other woman was willing to stand as chair she would take on that role herself. In total she successfully established 35 new suffrage associations in southern Sweden, eight of which were in Blekinge.

In 1911 she left Härstorp farm and moved into central Ronneby, having decided to dedicate herself to the campaign for universal suffrage. Suffragettes travelled throughout Sweden giving speeches, celebrating birthdays, organising bazaars and musical evenings as fundraising events. Meetings were held and strategies discussed. The women engaged in extensive correspondence and many became lifelong friends. Suffrage campaigning became a kind of lifestyle. In 1912 a petition for women’s suffrage was begun in conjunction with Karl Staaff, the prime minister who was a liberal. In 1913 Augusta Tonning achieved a record by visiting 195 places and giving 105 talks.

The petition produced thirty volumes of names with 351,454 signatures. However, when these were presented in 1914 another worrying fact had arisen: the national defence question and the First World War. The women’s focus now moved onto peace efforts, which included a Fredssöndag (Peace Sunday) organised on 27 June 1915. Almost 90,000 women congregated throughout Sweden and spoke out in defence of peace and protesting the war. Talks were given at each meeting point. Augusta Tonning’s pro-peace lecture was read out at each meeting held in Blekinge.

During the war years Augusta Tonning was also busy building a house in the small fishing hamlet of Bökevik, to the west of Ronneby. By 1913 she had already purchased a plot on a peninsula, to which there was no access by metalled roads. Villa Solvik was officially completed on 17 June 1915 and it became Augusta Tonning’s fixed abode. It was not just hers alone, however: she made Solvik a hospice for all suffragettes. Every time a women’s meeting was held in Ronneby she would invite the participants to Solvik and they would travel by boat along Ronneby river, out into the archipelago, on a journey which took nearly two hours.

Augusta Tonning was not without opponents in Ronneby. Ernst Flensburg, the town mayor, did his utmost to stop her. Her own brother, the aforenoted regimental physician Grönvall, was terrified that her many bold actions would cause a scandal. Augusta Tonning nevertheless remained a much loved and treasured aunt to Johan Grönvall’s three daughters. She was also a generous hostess and loyal friend, as is particularly apparent in all the thanks and poems written in her combined guestbook and diary, still visible at Villa Solvik.

In September 1921, after nearly twenty years’ worth of efforts, it was finally time for the parliamentary election in which both women and men were entitled to vote as equals. After the introduction of equal suffrage the suffragette associations were dissolved but Augusta Tonning continued to work on behalf of women, including by running courses at Solvik. She also continued to run an open house, welcoming exhausted suffragettes. She was also heavily engaged in the debate on alcohol. She remained a lifelong temperance supporter, opposed to any consumption of alcohol.

Augusta Tonning died in her beloved Villa Solvik in 1932. Her white coffin was taken to Ronneby where her remains were cremated. Within her coffin, as per her instructions, lay her bridal gown. The coffin was only decorated with a single wreath of ivy from Solvik. Her ashes were taken, also at her instruction, to Falun where they were buried at Stora Kopparberg cemetery in the grave of her late husband, Pär Tonning. With this Augusta Tonning’s task was complete. 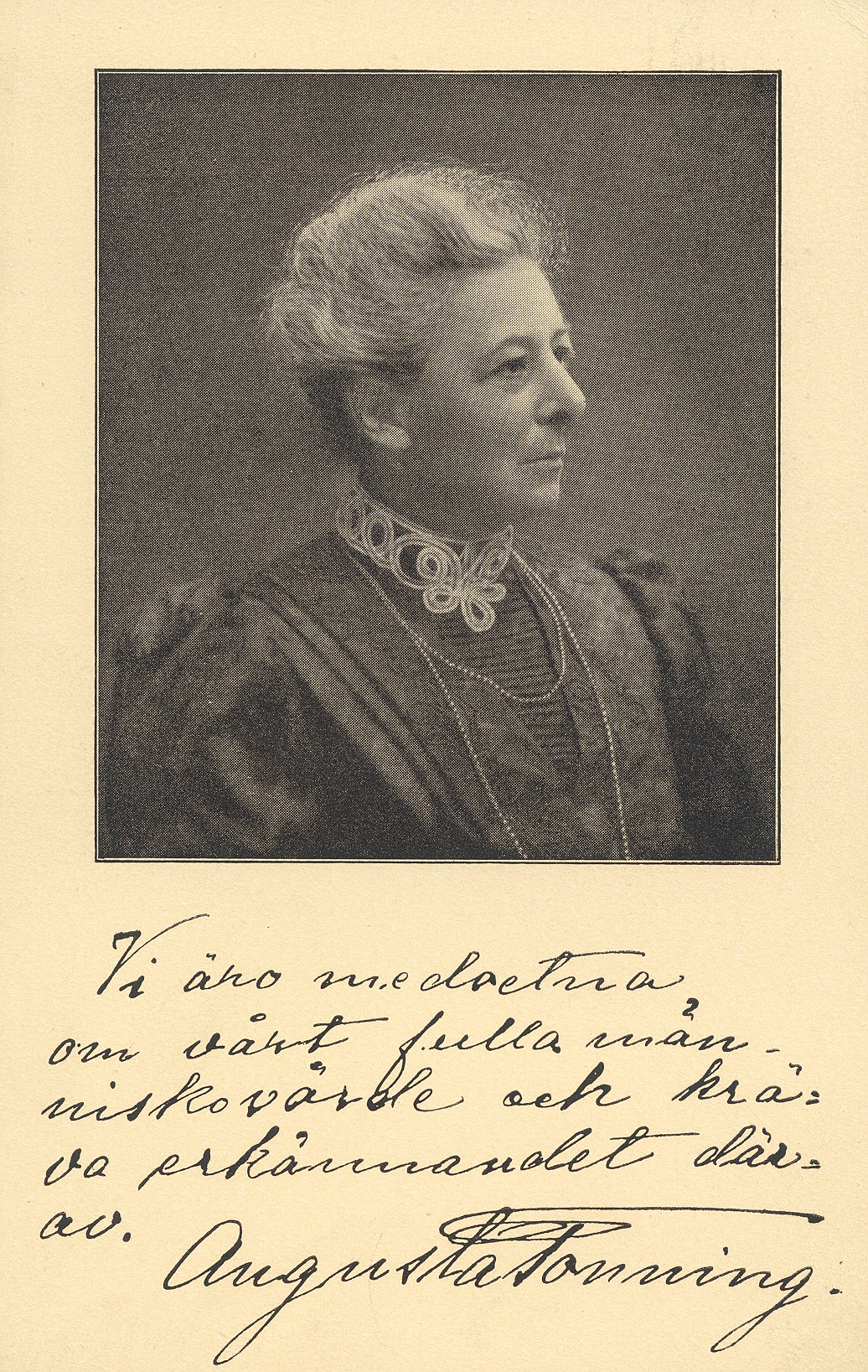 Augusta Tonning depicted on a postcard published by a women’s suffrage organisation in Uppsala. The text translates as: ”We are aware of our human dignity and demand the recognition thereof”. Photographer and year unknown. KvinnSam, Gothenburg University Library