Hilda Ahnfelt was the founder and owner of the first plume factory in Sweden and she won public recognition for her expertise during the late nineteenth- and early-twentieth centuries.

Hilda Ahnfelt was born in Tågerup, in Saxtorp congregation, in 1844. She was the daughter of Jacob Runnerström, an inspector, and his wife Caroline Helena Molin. She was the second youngest child in a family of 10 children. Her mother died in childbirth when Hilda Ahnfelt was four and a half years old. Although her father never married for a second time a certain Mademoiselle Jenny Westerdahl moved in with the family the same year that he was widowed and remained with the family.

Hilda Ahnfelt and her family moved twice during the course of her childhood: first, in 1846, to Tirup parish and second, in 1865, to Felestad, where her father was an inspector and lease-holder of various farms. When one of her sisters got married Hilda Ahnfelt accompanied her to Raus parish and then, in 1868, she moved to Västraby in Välinge parish, north of Helsingborg. Two of her other sisters and a Mrs Ahnfelt, the widow of parson and mother of Hilda Ahnfelt’s future husband, also lived in Västraby. Hilda Ahnfelt married Arvid Wolfgang Nathanael Ahnfelt, who had a doctorate in literature, in Felestad in 1871. The couple moved to Stockholm where Hilda Ahnfelt’s husband worked at the Royal Library. Arvid Ahnfelt later became a hard-working liberal journalist and publisher of historical sources. The couple had five children, named Gunhild, Gerd, Louise, Edmund, and Astrid Ahnfelt. The latter became a distinguished author and translator in her own right. Arvid Ahnfelt died in 1890, most likely from a heart attack. For a year after her husband’s death Hilda Ahnfelt carried on publishing his cultural journal entitled Ur dagens krönika: Tidstaflor, a publication which served as an organ for the literati of the 1880s. In the meantime Hilda Ahnfelt also ran her own manufacturing and business enterprise.

Hilda Ahnfelt had set up Stockholms Plymfabrik (plume factory) in 1879 and it was the only one of its kind in all of Sweden. She had taught herself the art of plume production by experimenting in her kitchen. Initially her dining room at home had served as her shop but she soon hired both shop- and factory-premises on Smålandsgatan in Stockholm. When she was interviewed about her 30-year long professional life by the Idun journal in 1909 Hilda Ahnfelt revealed that she had a staff of 16 girls, all instructed by her. A few years later her son, Edmund, took over the business. It is likely that her daughters were also active in the business as none of them ever married.

At this time plumes and feathers featured on women’s hats and were used by actors and by officers. From early on Hilda Ahnfelt faced competition from wholesalers who wanted to prevent her from revealing that she had direct contact with major producers in Cape Town, South Africa, and in Egypt. Her husband’s press contacts, however, chastised the wholesalers. Later it was her son, Edmund, who handled procurements at London’s major feather auctions during autumn and spring. The larger ostrich farms would harvest feathers four times a year. White quills from male ostriches were considered to be extremely exclusive items. Feathers from other birds, such as herons, Marabou stork, peacocks, ducks, roosters, turkeys, and capercaillie were also used.

The plume manufactory involves several stages. Fat must be removed, the feathers washed, bleached, dyed, and then dried. This also entails slicing, paring and stripping, or peeling off, the feathers’ nerves. Feathers are then built up into a “pleureuse” by layering several on top of each other to achieve the desired thickness. This is followed by binding-, sewing-, and assembly-work. A knife is used to bend the feathers. A catalogue published in 1913 shows the variety of items available from the Ahnfelt factory: genuine ostrich feathers shaped into “amazons”, “pleureuses”, down feathers and ostrich feathers. Fascinators, boas, frills, and decorative plumes, and other things, could also be made from Marabou stork, birds of paradise, herons, condors, pheasants, Indian pigeons, white peacocks, emus and cassowaries. Hilda Ahnfelt’s business also offered to refurbish feathered items according to “the best French methods”. The customers included those from “the royal household, cabinet ministers, the diplomatic corps, the army and the royal theatres” as well as “our most eminent female tailors and houses of fashion”.

Hilda Ahnfelt won first prize for her expertise at several exhibitions: Malmö in 1881, Copenhagen in 1888, Stockholm in 1897, and Landskrona in 1913. The factory wares were exhibited at the Baltic exhibition in Malmö in 1914. Hilda Ahnfelt published a work entitled Plymens historia och strutsen in 1910 which revealed her detailed studies of the varying use of plumes by soldiers and royal courts in different countries from antiquity onwards. An article simply entitled “Strutsen” described the breeding practises at ostrich farms and the “feather harvesting” method.

Feathers and plumed accessories gradually fell into decline, as had happened before during grim times. The First World War and increased demands for animal welfare also led to large hats with plumes becoming unfashionable. Hilda Ahnfelt however did not live to see her plume factory go bankrupt in 1928. She died the year before in Stockholm and was buried in Solna cemetery. 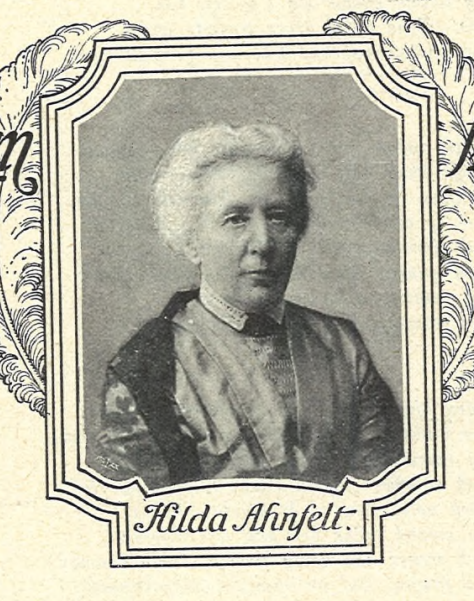