Hildur Lundberg was one of the first generation of female librarians. She established Stockholm city library’s long-standing and much loved story-telling tradition and often spoke about and wrote on children’s books and reading material for children and young people.

Hildur Lundberg was born in Stockholm in 1878. She was brought up within a well-off bourgeois home as the eldest of four children. Her father, Rudolf Lundberg, had a doctorate, worked as a fisheries inspector, and was a pioneer of fish breeding. Hildur Lundberg gained her school-leaving certificate from the Statens normalskola för flickor (national standard school for girls) in 1897 and then worked as a teacher at girls’ schools in Strömstad, Jönköping, and Linköping. She graduated from Högre lärarinneseminariet (the advanced teacher-training programme) in 1901 and then in 1908 she graduated from the 3rd section of the same institution. She also attended the course for librarians of teaching establishments which Valfrid Palmgren, a pioneering librarian, had organised on behalf of the Kungl. Överstyrelsen för rikets allmänna läroverk (royal national board for the public schools of Sweden) and it was there she discovered what would become her life’s work. She became deputy librarian at Pedagogiska biblioteket and was also the director of the newly-established Gustav Vasa congregational library. Library positions were part-time posts and Hildur Lundberg also worked as librarian at the Centralförbundet för nykterhetsundervisning (central association for temperance education) library. She was appointed to Stockholm city library in 1927 before it opened in 1928 and remained in post until she retired in 1943.

The majority of Stockholm congregations had some form of local library by the end of the 1800s. Gustav Vasa congregational library was started in November 1909. There was a lot of interest in the enterprise and the library appears to have been able to access comparatively beneficial resources from its inception. The premises in the congregational building were simple but already in 1912 the library moved into new premises in a five-roomed apartment at Norrtullsgatan 8B. Hildur Lundberg was employed as director from the beginning and she developed the library and turned it into a much-publicised model library. When attending Valfrid Palmgren’s course Hildur Lundberg had heard her describe the open and outward-looking approach of American libraries. She had also read Palmgren’s articles on her visit to the USA and her 1909 travelogue entitled Bibliotek och folkuppfostran. In the Gustav Vasa congregational library Hildur Lundberg was able to put the new American ideas on libraries into practise. Her library became the first Swedish open-stack public library, allowing the library visitors to choose their own books from the shelves. Up to 1919 Gustav Vasa congregational library and the Stockholm children’s and young people’s library – which Valfrid Palmgren had set up in 1911 – were the only two libraries with open-stack access. This became a popular system and helped to increase the lending numbers. The library also had a modern card catalogue containing subject descriptors – a so-called reference catalogue which followed the American model.

The Gustav Vasa congregational library was open to children from the beginning. There were special opening hours for them: three hours in the morning on three days of the week. Hildur Lundberg created a dedicated children’s section at the new premises at Norrtullsgatan, offering story-telling hours, competitions, dramatized fairy-tales, boys’ clubs, and other activities to promote reading. At that time this was a completely unique enterprise. School-classes were invited in for lessons in what we would now call information searching.

Hildur Lundberg was the secretary of the board for the Stockholm children’s- and young people’s library throughout its existence, from 1911–1927. Both libraries cooperated and for a while an American librarian of Swedish descent was employed to expand the size of their English-language literature collection.

The Gustav Vasa congregational library was decommissioned in 1927 and its collection of books and the three permanent staff were transferred to Stockholm city library. Hildur Lundberg became the deputy-librarian under the head-librarian Fredrik Hjelmqvist and quickly took on the responsibility for the entire children’s section of the city library.

She brought her successful experiences from the Gustav Vasa congregational library with her to her new post and her work on the children’s section at the main library and its branches was influenced by her previous experiences for many years. She completely lived up to Valfrid Palmgren’s motto of “library spirit” with content and passed it onto her successors.

Hildur Lundberg was an active and much-loved story-teller. The foreword to her first collection of stories, entitled Nu ska ni få höra, published in 1933 and in several editions, provides a sort of explanation. She believed that stories needed to be orally communicated and she encouraged adult readers to tell stories to children, in a simple and natural manner. The youngest of children should be exposed to stories and events originating in their everyday rather than fairy-tales. Slightly older children could listen to more complicated and exciting stories but she emphasises that the selection of folk-tales – initially intended for adults – should be carefully chosen so that the children are not frightened by them. The language of the stories contained within her two collections is direct and lively. Thus she established a tradition of story-telling which was continued by the librarians at the children’s library section of the city library right up until the 2000s and of which Elsa Olenius became the most famous example.

In 1920 Hildur Lundberg published, in collaboration with Fredrik Hjelmquist and the library manager Knut Tynell, a book called Bibliotek: deras betydelse och skötsel: en handledning för mindre bibliotek, which was released in several editions. Hildur Lundberg was interested in issues of education and salary and formulated the types of demands which should be place on librarians in her article “Några ord om bilbiotekarien och hans [sic!] arbete”, which was published in Biblioteksbladet in 1917. She wrote a lot of articles on children’s and young people’s enterprises, school libraries, and about reading material for children and youth. She gave lectures, offered book suggestions on the radio, provided book lists for the bookshops, worked as an advisor to publishers, took a stand in the renewed “Nick Carter debate” in 1931, and gave lectures during Ungdomens bokvecka (the young people’s book week) in 1933. Hildur Lundberg shared Valfrid Palmgren’s views on which books the libraries should make available to children: reference had to be made to what children actually wanted to read and it was pointless trying to forbid them from reading certain books. With regard to that subject she became involved in polemical debate with the well-known children’s book reviewer Gurli Linder. Hildur Lundberg was not afraid of modern technology. She believed that the balopticon projector – which allowed images in books to be displayed on a large screen – was an excellent aide for large groups of children.

Hildur Lundberg was a major admirer of and close friend of the suffragette, historian, professor and director of studies at the Åhlin school Lydia Wahlström. The two of them corresponded for many years. Following her retirement Hildur Lundberg went to live with her sisters at the family farm of Djurkälla in Borghamn, near Ombergs fot on lake Vättern. Lydia Wahlström was a frequent guest at this house.

Hildur Lundberg died in 1972. She is buried at Väversunda cemetery. 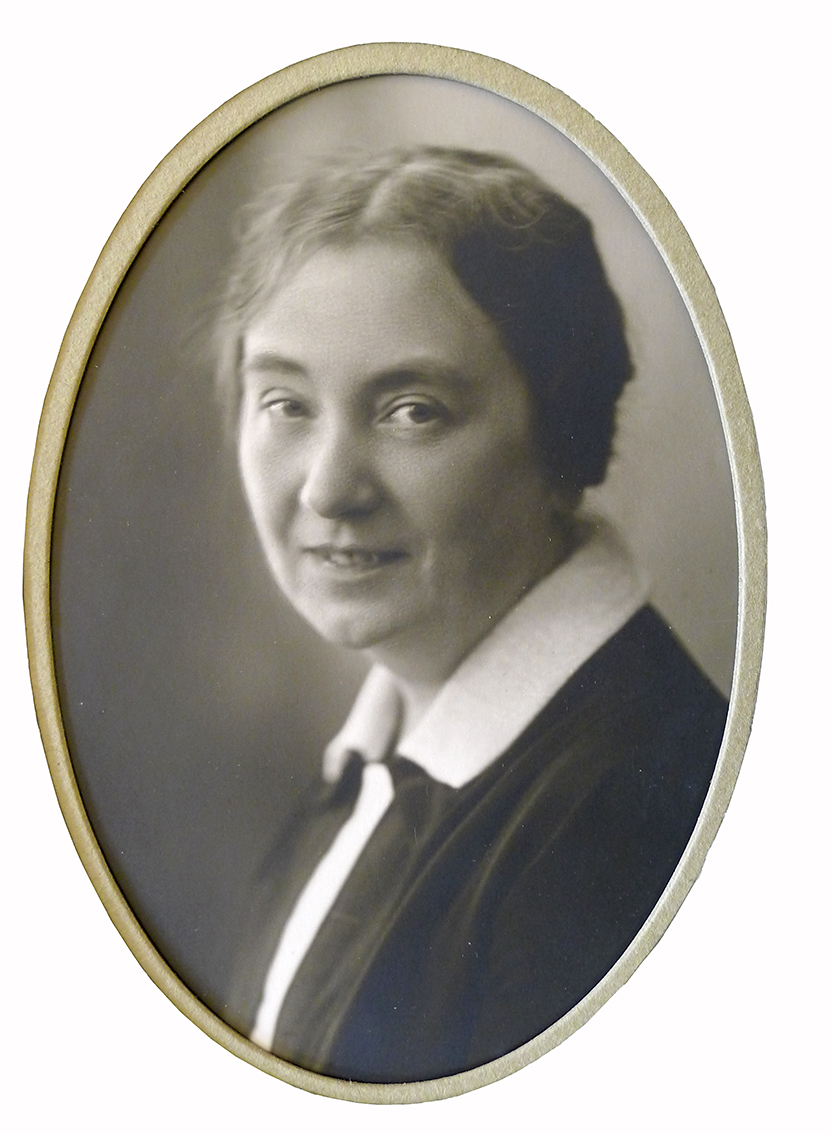