Hilma Börjesson was a missionary, a teacher, and the founder of a school. She was active in China during the late nineteenth century and the early twentieth century.

Hilma Börjesson was born in 1863. She grew up at Haggården in Nödinge, Hajom parish (today known as Mark municipality, in Västra Götaland). The family did not own the farm they lived on but were tenant farmers and they had a couple of servant boys and girls. Hilma Börjesson’s father died when she was 12 years old. Her mother lived until 1912 and she and her family carried on living at the farm throughout that time.

Hilma Börjesson spent the period of 1879–1880 training as a junior-school teacher. Following a couple of year’s employment she attended the public school teacher-training programme at Skara from 1883 to 1887. She then spent a couple of years working close to home and in 1890 she got a job as a special teacher at the Tegelsmora church school in Uppland. She began her job there in June 1890 but already quit in September 1891, as she had been accepted as a missionary to China by Svenska Missionsförbundet (SMF; Mission Covenant Church of Sweden).

Following her acceptance as a missionary Hilma Börjesson moved to Stockholm in order to study at the Elsa Borg Bibelkvinnohem (bible women’s home) where many female missionaries trained before heading overseas. Hilma Börjesson gained thorough training as a teacher as well as teaching experience but was inexperienced in terms of evangelising and working with women. At the annual SMF conference in June 1892 she was appointed “Sunday school children’s missionary” to China. She travelled out to China in March 1893 and arrived in the main town of Hubei province, Wuhan, in May. At that time it was the sole place in China with an SMF missionary station.

Hilma Börjesson began with learning Mandarin, working in street chapters, and running collections for women. Accounts by other missionaries emphasise that she was particularly active in Wuhan during the 1895–1896 period, a time when several missionaries left the SMF to join other missionary groups. In 1896 Hilma Börjesson travelled to the village of Huilongshan to work with the local women and she set up her own missionary enterprise there. Through her efforts a small station with a chapel was established a few years later in Huilongshan. The village lies along the Yangtze river, about nine Swedish mile northeast of Wuhan and two and a half Swedish miles northwest of Huangzhou, which was where she would later spend most of her time in China.

In 1902 the SMF missionaries were invited by local officials to begin an enterprise in Huangzhou. Despite the lack of finances and despite not receiving any extra funds from the SMF in Sweden it was decided that they would go ahead and set up a new missionary station. Unexpected help came from Anna Berg who had just arrived as a new missionary in China. She had been widowed when young and thus inherited some wealth from her husband, who had been a relatively wealthy businessman. Anna Berg invested in plots of land and paid for the construction of several buildings and also became responsible for setting up a “practical school for girls” which opened in 1906.

Hilma Börjesson made a lot of solid contributions to developments in Huangzhou by starting a girls’ school in rented premises in the small village of Tuangfeng outside of Huangzhou in 1904. The money for this had come from a “pair of warm-hearted missionary friends in Västerås”, according to Hilma Börjesson’s own account. The Tuanfeng school was the precursor to the larger school in Huangzhou which opened in February 1906. The Tuanfeng girls’ school may have seemed to be a tentative beginning but Hilma Börjsson’s efforts on behalf of education in Huangzhou and the rest of eastern Hubei are still remembered by her contemporary educators. When Huanggan city’s experimental school collated information on their slightly more than 100-year history in 2008 they began in 1904 with Hilma Börjesson and her Tuanfeng school. The history of the school itself shows that Hilma Börjesson and Anna Berg had been the only female headmistresses or educators up to that point. Although Hilma Börjesson is referred to by her Chinese name she is described as a Swedish missionary, albeit not in great detail. Today the school is considered to be a leading institution in eastern Hubei and is highlighted as a model school which was selected in the first round of “national modern technical experimental schools”.

Hilma Börjesson along with Anna Berg developed the school enterprise in Huangzhou in what began as the Huangzhou practical school in 1906. From 1911 onwards it offered the equivalent of the public school teacher-training programme (Chinese lower middle school) and the school changed its name to Huangzhou practical school and female teacher-training programme. Several women who had qualified before 1911 were already working as village teachers and the school in Haungzhou gained a very favourable reputation throughout eastern Hubei and in the neighbouring provinces. The school’s aim was “to provide young indigenous women with a practical education with evangelical influences as a basis for their future activities in life, whether as wives, mothers, teachers, or Bible women”. It thus offered a mix of practical and theoretical work in which Hilma Börjesson, with all her training and experience, was responsible for teacher-training whilst others handled the practical aspects. In 1912 SMF re-organised its entire school operations in China so that the schools became clearly divided into junior schools and public schools and in both of these the heavier demands were placed on teachers’ qualifications. Hilma Börjesson sat on the committee which prepared this re-organisation and she wrote that “this seemed to me to be crystal clear so that I immediately began to make preparations.”

What is remarkable about Hilma Börjesson, Anna Berg, and the other early female missionaries is that during their initial years out in the field they were disenfranchised within the missionary corps. Nevertheless, Hilma Börjesson came up with the Tuanfeng school initiative on her own, and with Anna Berg’s help, set up the Huangzhou school. It is also clear that she became a major role model for young women in eastern Hubei during the time she was working in Huangzhou. Several of her students returned to Praktiska skolan as teaching instructors, whilst some of her students also went on to attend university in Nanjing and Shanghai. Hilma Börjesson never married and perhaps also became a role model in that respect as a dedicated educator and missionary who also showed that women can accept responsibility and have leading roles in society. In China the role of women began to change during the 1910s, following the fall of the empire, and primarily in the bigger cities. Those women who had been educated by Hilma Börjesson in Huangzhou played a part in this change at a local level.

The SMF missionaries tended to be sent out for periods of seven years at a time and Hilma Börjesson successfully completed three such periods as well as a couple of extra years. During her stints back home in Sweden she would travel throughout the country, talking about missionary work and fund-raising for the mission. There are many reports in local newspapers from that time which tell of Hilma Börjesson’s visits, for example the Alingsås Tidning reported on 24 January 1902 that Hilma Börjesson had sown “views of the missions in China through the Lanterna Magica”. Other papers reported that she had also travelled across the country before her first missionary trip abroad in order to become established as a “Sunday School children’s missionary” and she had set up children’s sewing associations whose products were sold at auctions on behalf of the mission. She would also give “children’s sermons” and “talks for adults on the women’s mission both at home and abroad”. It is clear, when reading between the lines in various missionary reports and texts, that Hilma Börjesson was accomplished in Mandarin as other missionaries noted that she would translate and interpret in various contexts.

Hilma Börjesson died on 5 November 1923 in Huangzhou. The news was reported in the Dagens Nyheter newspaper as well as other national newspapers, as well as in many local Swedish papers. She was buried in the small town of Guling (Kuling), on Lushan hill in Jiangzi province. Missionaries from many places had built summer houses at Lushan from an early stage in order that they might escape the humid heat of the Yangtze river during the height of summer when temperatures would rise above 40 degrees Celsius. Hilma Börjesson never had her own home at Lushan but lived at the SMF’s communal house. At Guling one can still, in addition to Hilma Börjesson’s grave and the house that she lived in there, see a collection of her books – mostly in Swedish – including her hymn book, which are housed in the old Lushan library. This library holds a lot of material which remained in China when the missionaries were forced to leave the country during the Second World War and in 1949 when foreign missions were banned upon the establishment of the People’s Republic of China. 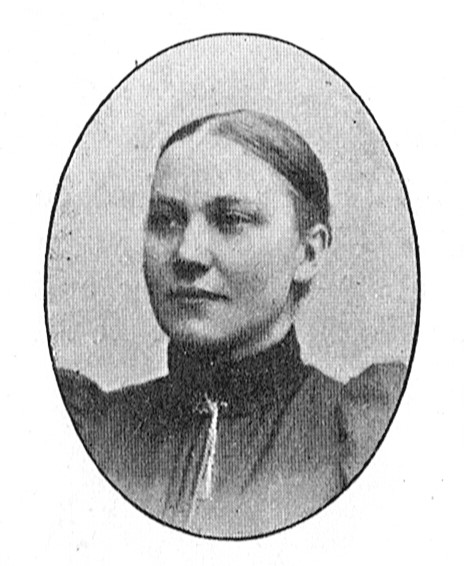