Hilma Svedal is known for being a Swedish gold prospector who returned from Alaska in the USA and set up her own ‘Alaska’ on Nord Långö near Strömstad.

Hilma Svedal was born in Strömstad in 1870. She was the eldest of seven sisters. She also had three older brothers. As was the norm at the time, she helped her mother with the household work and also helped her father at the fishing. The whole family lived at Syd Hälsö, near Nord Långö in Strömstad’s northern archipelago. Later Hilma Svedal worked for a time as a herring salter and as home help. She also attended the public college at Blomsholm.

Like a million other Swedes, Hilma Svedal migrated to America around the turn of the 1900s. In 1897 she travelled, third class, on the SS Norway from Christiania (modern-day Oslo) to New York. There she spent four years working as home help for various families. She then headed west by train to Sacramento and then continued on by stagecoach to Portland, Oregon. Taking her inspiration from the stories of the gold diggers of Klondike and Alaska, she travelled by boat from Seattle to Skagway, Alaska. She then made her way to Dawson City in Klondike by train and paddle-steamer. While she was in Alaska she worked as a cook and dug for gold, first by herself and then with her husband, a Norwegian called John Svedal, whom she married in 1912.

On the death of her father Hilma Svedal came into her inheritance of 1/10th of Nord Långö. She and her husband John then made their way back to Sweden in 1925. Once home they lived, as they had in Alaska, in a tent on Hilma Svedal’s plot of land on Nord Långö. However, John did not settle in Sweden and ended up returning to Alaska. Hilma Svedal chose to remain in her native country and began to create her own ‘Alaska’. She was nearly 60 years old when she began what became her life’s work.

Hilma Svedal’s construction work on Nord Långö lasted a total of ten years. Hilma Svedal constructed a small stone building, named “Iglon”, in 1926 which served as her first home. She then built a bungalow in which she lived for 20 years. Hilma Svedal’s version of ‘Alaska’ lies in a small hollow which periodically fills with water. This required a well-thought out drainage system. Hilma Svedal designed one which also served as an irrigation system using a series of dams. In order to construct ‘Alaska’ Hilma Svedal had to head out in her rowing boat to find suitable stones which she then bonded together using cement. Although she undertook a lot of the building work herself she also accepted help from the locals. Once the stonework was finished Hilma Svedal planted cherry trees and exotic plants and by the summer of 1930 her garden was complete. Between 1930 and 1933 she took a break from construction and travelled to the USA to visit her sister Justina who was living in San Francisco. It was probably this visit which gave her the idea to build her own Golden Gate bridge and set up a hostelry called the Golden Inn. These buildings, along with a new pier for larger boats and a pedestrian bridge to access it, were built during the 1933–1935 period. Visitor numbers increased in tandem with the completion of the garden and inn. So-called moonlight tours – with accordion music and dancing – were already being organised in 1934. Local fishermen, who ran ‘shuttles’ during the peak summer months, provided the method of transport between Strömstad and Hilma Svedal’s ‘Alaska’.

During the Second World War the Swedish military set up a defensive post at ‘Alaska’ and the soldiers were billeted at the Golden Inn. Following the end of the war Hilma Svedal sold ‘Alaska’ to her nephew Johan Carl Lundberg, who then ran ‘Alaska’ with tenants from 1946 until 1961. At that point Oscar Nilsson Spigerhäll took over. Although Hilma Svedal moved to the mainland and settled at Bågen, she often spent a lot of her time at ‘Alaska’. Following the installation of an electrical supply there was a fire at the inn on 17 May 1962, which burnt the Golden Inn to the ground. Oscar Nilsson tried to keep ‘Alaska’ going for the next couple of years but the lack of an inn had a detrimental impact on visitor numbers. In 1964 ‘Alaska’ was sold to the state who subsequently tore down some bits and allowed others to fall into ruin. The surviving elements of the garden were restored in 1992.

Hilma Svedal died in 1965 following a period of illness. She is buried at Skee cemetery. Her gravestone has the words “Don’t worry” inscribed, reflecting her favourite phrase. Her husband, John Svedal, had already died in 1958 and lies buried at the Pioneers of Alaska cemetery in Seward, Alaska, the town where he had spent the final years of his life. Although the couple led separate lives from 1925 onwards they never divorced. ‘Alaska’ was re-inaugurated in 1996 with the installation of a new statue portraying a female figure, boats, and summertime activities. It is still (2017) possible to visit Hilma Svedal’s ‘Alaska’ either using your own boat or, during the summer months, travelling by tourist boat from Strömstad. 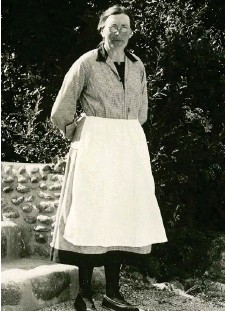