Hjördis Töpel was one of Sweden’s top swimmers and divers during the 1920s.

Hjördis Töpel was born in Gothenburg in 1904. She was the daughter of Viktor Emanuel and Matilda Josefina Töpel. Her father was a typographer and a book printer. Hjördis Töpel had six brothers and two sisters.

Hjördis Töpel was a member of the Gothenburg SK Najaden club during her sporting career. The club was founded in 1917. Ahead of the Antwerp Olympic Games in 1920 qualifying competitions were held in Stockholm to select the Swedish Olympic team. These competitions also served as Swedish Championships. The SK Najaden club sent several of their female members to compete, and some of them were successful enough to be selected for the team that was sent to Belgium. Hjördis Töpel, however, had to make do with being a reservist who had to wait at home.

Hjördis Töpel was included in the Swedish team sent to Paris for the 1924 Olympics. Her performance in the regular dive event had her almost level with the event favourite, an American. In the end Hjördis Töpel was awarded the bronze medal. Of the six nations represented in the freestyle 4x100 metre relay it was the Swedish team which brought home the bronze medal. This team included, not just Hjördis Töpel, but also Aina Berg from Gothenburg, Wivan Pettersson from Eskilstuna Simsällskap (swimming society) as well as Gulli Ewerlund from Malmö Simsällskap. Hjördis Töpel and her younger sister Ingegärd, also a member of SK Najaden, were both competitors in the regular dive event at the 1928 Amsterdam Olympic Games. Unfortunately they were both knocked out in the first heat which they had both been placed in.

Hjördis Töpel competed in swimming events at the 1923 Swedish Games in Gothenburg, winning both the 100 metre and the 300 metre freestyle competitions. Further, it was thanks to Hjördis Töpel’s strong effort in the last section of the 4x100 metre team race that led to Sweden’s victory. In 1924 Hjördis Töpel was the outright winner of the first ever so-called Älvsborgsimningen, which involved a 2,000 metre swim and was completed by 12 female swimmers. Hjördis Töpel completed the course in 44:30.50 minutes. She won the regular dive event in the regional championship as late as 1935. In 1936 Hjördis Töpel was a member of the SK Najaden winning team in the 4x100 metre event.

Once Hjördis Töpel had finished competing she then became an office worker. She died in Gothenburg in 1987. She is buried at the Västra cemetery in the same city. 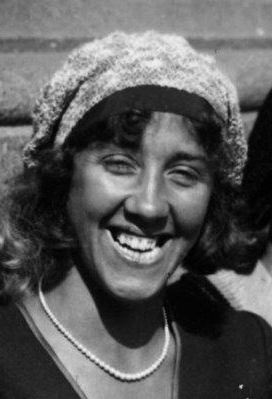