Teacher, supporter of the women's liberation movement, principal of the female citizens' school at Fogelstad

Honorine Louise Hermelin was a pedagogue and popular educator. She was the principal of Kvinnliga medborgarskolan (the female citizens’ school) at Fogelstad.

Honorine Hermelin was born on 19 October 1886 in Ekebyborna in Östergötland. Her father was Joseph Hermelin, an abstinence campaigner and ‘blåbandsbaron’ (baron of the blue stockings). Her mother, who had died just a few days after her daughter was born, was Honorine von Koch. Honorine Hermelin grew up on the shores of lake Boren, the youngest of two siblings. When she was a teenager her father got remarried to a young relative of her mother’s, Jane von Koch. Honorine Hermelin’s family now included another seven half-siblings. Having been home-schooled by several tutors, she then began to attend the Brummer school in Stockholm. From 1905-1907 she then attended Anna Sandström’s advanced female teacher-training programme, and returned from 1910-1911 after which she graduated with ‘högre kompetens’ (advanced competency).

In 1907 Honorine Hermelin got a job at the Brummer school where she worked until 1919. At the same time she intermittently took courses at Stockholm college and at Uppsala university. From 1916 onwards she also taught at Anna Sandström’s advanced female teacher-training programme, where she remained until 1925. She then became principal of Kvinnliga medborgarskolan at Fogelstad. She thus became part of the influential and liberal-minded radical Fogelstad group, whose members also included Kerstin Hesselgren, Ada Nilsson, Elin Wägner, and Elisabeth Tamm. She settled permanently at Fogelstad in the old inspector’s residence which Elisabeth Tamm, a land-owner, had left in her will as a school building. Honorine Hermelin used to call the building ‘Lilla Ulfåsa’.

Kvinnliga medborgarskolan at Fogelstad had previously been used by the suffragettes to teach civic education classes. It had also emerged out of the reformed pedagogical tradition which lay behind the establishment of girls’ schools and which several of the Fogelstad women had experienced. However, its key figure was Honorine Hermelin who had succeeded Anna Sandström, one of the great pedagogues of Swedish educational and girls’ school reforms. When Honorine Hermelin became principal of Kvinnliga medborgarskolan at Fogelstad she was already an experienced teacher and a proven talented pedagogue. Her charismatic personality left the strongest impression on the school, which became her life’s work and where she put her pedagogic ideals into use. She was also active in the local municipality within Julita parish and was on the municipal council from 1930-1946. In 1932 she became the first woman to become chair of a school board, a position she held until 1943.

The Fogelstad group, with its school and journal Tidevarvet as focal points, was the core of an extended female network which originated in the early days of the suffragette movement, the hut- or ‘settlement’ movement, and Föreningen frisinnade kvinnor (liberal women’s association). It incorporated a number of the approximately 2,000 women who participated in some of the Kvinnliga medborgarskolan courses. They also went on to create their own network, the Fogelstadförbund (Fogelstad association).

The Fogelstad women were all independent and distinctive women who were unified in their strong belief in and visions of a society marked by female citizenship. They were more or less connected to eachother in various ways. Elisabeth Tamm, Ada Nilson and Honorine Hermelin sort of formed an inner circle whilst Elin Wägner and Kerstin Hesselgren found themselves on the periphery, at least for a time. Within these circles smaller emotionally intense units also formed. Ada Nilson and Honorine Hermelin’s relationship bore traces of romantic interest albeit they never formed an exclusive couple. This special relationship lasted for a long time. When Ada Nilson became aged and almost lost her sight she moved in with Honorine Hermelin at Fogelstad and remained there until her death. In the early 1930s Honorine Hermelin’s life was subject to a new powerful emotional relationship when the Finnish-Swedish author and critic Hagar Olsson entered it. This relationship also seemed to eventually take on the form of a friendship. Honorine Hermelin, for a brief period late on in life, was married to the Danish historian of religion, Vilhelm Grønbech.

Kvinnliga medborgarskolan ceased to be in 1954. Honorine Hermelin continued her pedagogical activities, largely through her involvement in the still active Fogelstadförbund. She also wrote for that association’s eponymous journal, for which she was the responsible publisher from 1944-1974. From time to time she still undertook what had previously been extensive lecturing. In 1954 she was awarded the Illis quorum medal of the eighth degree in recognition of her significant activities on behalf of civic education.

When Ada Nilson died in 1965 Lilla Ulfåsa became too large for Honorine Hermelin and she then spent periods living at Blomsterfondens hus just outside Stockholm, usually during the winter months. She died there on 4 September 1977, aged 90. She is buried at the foot of Elisabeth Tamm’s gravestone at Julita cemetery. 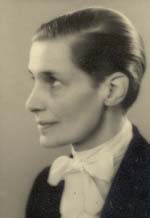