Ida Nilsson was born in 1871 on Sahlströmsgården farm in Utterbyn in the province of Värmland. Her parents were Marit Nilsdotter and Per Sahlström. They had ten children of whom two died when they were small. Per Sahlström developed farming and forestry and also invested in the sawmill industry. He became one of Fryksdal’s wealthiest people and was active as a liberal politician in the municipality, county and parliament.

Ida Nilsson grew up in a large family in which both children and adults shared the work on the farm. She herded cows as a child and after finishing school, she became a cowherd living up in the hills in the summer. Her three sisters were sent to a girls’ school in Karlstad, but she was not. Her father considered that he needed her at home on the farm to work out of doors as well as indoors. Local people called her “Per Sahlström’s best farm boy”. After her daily work, she wove and also involved neighbouring girls in the production of textiles.

Her brother, the sculptor Bror Sahlström invited the artist Carl Wilhelmson to the farm in the summers of 1900 and 1902. The visits of this artist were to have great significance for Ida Nilsson and her sister Anna Sahlström. The sisters were models for the artist in the painting Lördagsafton in 1900. Carl Wilhelmson became enchanted by Ida Nilsson’s woven creations and ordered furniture fabrics and red and white curtains with yellow patterns that shone like gold. Strengthened by this appreciation, she rented a stand at the household association’s exhibition in Karlstad in 1903. There she exhibited textiles and also furniture designed by herself that was manufactured and sold on a small scale. The same year, she sent in a sample of her weaving to the Swedish arts and crafts association Föreningen för Svensk Hemslöjd. The manager Lilli Zickerman started a collaboration and Ida Nilsson delivered textiles to the association’s shop in Stockholm. Only the most skilful craftspeople were permitted to weave the shop’s products since they were sold in the capital to a wealthy circle of customers who were interested in their cultural heritage as well as artistic forms of expression.

At the age of 35, Ida Nilsson left her home and moved to Stockholm where her sister Anna Sahlström — now a pupil at the art school Konstnärsförbundets skola — and the love of her youth, August Nilsson were already living. She married August Nilsson at Skansen in 1906. Their home was always open for Anna Sahlström and her artist friends. The couple’s two daughters were born in 1908 and 1911. Her husband started a wholesale company and Ida Nilsson opened a shop to sell home crafts products. She participated with textiles and furniture at fairs and exhibitions.

Ida Nilsson performed during summer Sundays at Skansen. In her old Frykdal dialect, she told stories and strange tales she had heard and became extremely popular. It was there she was nicknamed “the Fryksdal farmer’s wife”. She noted down “with good and quiet humour” several of these narratives that were then published as books, among them Britta i stubben och andra historier från Fryksdalen in 1945.

The Nilsson couple returned to Värmland in 1915. They bought the farm Sillegårdsbrunn and a neighbouring country estate on the shores of Lake Fryken, with the assistance of her father Per Sahlström. The warm bath house was renovated and re-equipped and male and female bath assistants were employed. The enterprise was expanded with a boarding house. Ida Nilsson designed among other buildings a large restaurant building that was built in Old Norse style. It was furnished with her textiles and Anna Sahlström’s murals, and from the ceiling hung Bror Sahlström’s wrought-iron art nouveau lamps. Sillegårds Brunn-och Badinrättning, Restaurang and Pensionat, as the complex was called, had its heyday during the 1920s and 1930s. The guests from far and near could take the train there on the newly opened Fryksdalsbanan with the station Västra Ämtervik close by, and the steamboat lay to at the jetty. On the other side of the lake lived Nobel prizewinner Selma Lagerlöf who was also a guest at Sillegården. The journalist Barbro Alving, with the pseudonym Bang, wrote an enthusiastic article in the weekly magazine Idun in 1932 about the Sahlström sisters around Lake Fryken. She visited both Sillegården and Sahlströmsgården, the latter then being run by the sisters Ingeborg and Johanna Sahlström with Anna Sahlström who had now returned home. Nowadays, both farms with boarding-house and hotel receive guests who are able to see the art works of the Sahlström siblings.

Once back in Värmland, Ida Nilsson developed her textile enterprise and gave employment to the women of the district, who wove according to her assignments. About ten women worked in the weaving cottage at Sillegården, and others worked in their own homes. The older weavers taught girls who had finished school their craft. Home crafts were for many women an important sideline to farming. Ida Nilsson was awarded a diploma in 1924 by Föreningen för Svensk Hemslöjd which was then celebrating its twenty-fifth jubilee. The association appreciated her work and wished her well in her continued activities in the service of Swedish home crafts. She fitted in well with the association’s national, aesthetic and social goals.

Ida Nilsson was inspired by traditional folk art, and she created textiles with new patterns and colour settings that were woven by women from the Frykdal district. In 1922, the local arts and crafts association, Föreningen Värmlands Hemslöjd, opened a big exhibition at the county governor’s residence in Karlstad. Ida Nilsson’s creations were displayed in the Fryksdal section and her candlewick carpet received much attention. She was praised for her skilful handiwork and her colouristic design. The carpet seemed to be so beautiful that it would almost have done as well as a wall-hanging. In 1927, she had her own textile stand at the Karlstad Industrial & Handicrafts Exhibition. Apart from carpets, she showed runners, curtains and a tapestry based on a sketch by Bror Sahlström.

During the 1920s and 1930s, Ida Nilsson participated in several of Värmland’s Homecrafts exhibitions like for example at the Stockholm Exhibition in 1930 when her rugs were displayed. In 1932, she collaborated in a large exhibition at the Värmland Museum with her siblings Anna and Bror Sahlström. Ida Nilsson showed “art-weaves of her own composition”. She exhibited rag rugs and pile rugs. Karlstads-Tidningen wrote about the exhibition, with the emphasis on her siblings’ works, while her rugs were reviewed in just a few lines. Her wealth of ideas and skilful handwork were considered to be unusual and the low price of the rugs was commented upon: “In this case, she has no artistic opinions on the issue. She wants a reasonable price for genuine craftsmanship — one gets the rest for free.”

Ida Nilsson’s rag rugs had abstract patterns, often with stripes of varying widths. They were usually woven in plain weave with patterns made by rags that were shuttled into the weave and that broke up the stripes. These patterns were inspired by nature. Some of them are still used in weaving in Fryksdalen today. Her window curtains in plain weave, the so-called “Frykdal check” are still being woven today. At the beginning of the 1900s, they were mostly in blue and white but later were also multi-coloured. Her special earmark was the curtain woven with yarn with the blue colour of Lake Fryken and the hills around. She loved colour, and used the whole colour scale, with a certain preference for bright, intense and dark colours.

Ida Nilsson, who died in 1963, was spoken of by people who knew her as a friendly and determined woman who loved to joke. She lies buried at Västra Ämtervik Cemetery. 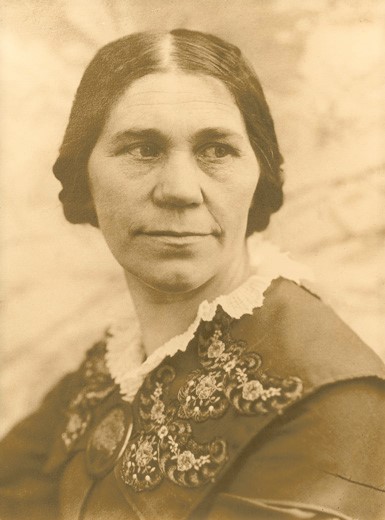