Maja Forsslund was active in recording and preserving memories and historical objects in Kopparberg. She participated in building up the association Nya Kopparbergs Bergslags Hembygdsförening and the museums in Ljusnarsberg/Kopparberg.

Maja Forsslund was born in 1878 in Kopparberg in the county of Bergslagen. She was the daughter of Carl Fredrik Forsslund, a prominent wholesale merchant in the region, and his wife Augusta Christina Öhman. Her mother was also the child of a tradesman, Erik Eriksson Öhman. Apart from his business successes, Maja Forsslund’s father held several municipal positions of trust.

Maja Forsslund’s six-year-older brother, Karl-Erik, had participated actively at the beginning of the 1900s in the founding of Brunnsvik folk high school. He was publicly known as an author with a special involvement in his home district and the countryside in Dalabergslagen. His best known book, apart from his major work Med Dalälven från källorna till havet, had the brief title Storgården and was about Karl-Erik and Fejan Forsslund’s ideally typical home in the Ludvika district.

Maja Forsslund kept to Kopparberg, the district where she grew up, with its wealth of history. Her engagement in the community started early on. She is said to have been active in the local Kopparberg branch of the women’s association Föreningen för kvinnans politiska rösträtt (FKPR), founded in 1906. This is apparent from her article on the women’s movement in the local district’s book Från Ljusnarsbergen in 1921. Here she contributed some chapters on popular movements in Kopparberg. Maja Forsslund’s starting point for her activities was the classic one with books and lectures as the cornerstones of her work in popular education. She was a driving force and participatory in the founding in 1919 of the Kopparberg-Ljusnarsberg popular education association. Even earlier, book collections for the people had been acquired in various ways through the church, but through Maja Forsslund’s involvement, the work became more organised and was the forerunner to the Ljusnarsberg library.

Around midsummer in 1920, the Västmanlands-Dala nation, a group of students from Uppsala, started a course on local culture and history in Kopparberg. The same summer, a major homecrafts exhibition was also held there. However, the course encouraged and inspired the new popular education movement mainly to become engaged in religious folk memories as the local district memories of the future. Carl Wilhelm von Sydow, an academic folklorist who was contemporary with Maja Forsslund, emphasised how important the work was of noting everything down. This made an impression on Maja Forsslund and she energetically went on comprehensive collecting expeditions among the population in the districts around Kopparberg. People still remember how she came cycling up to the farms.

The material she collected is now preserved in the Örebro County educational association’s archives for folk history and certain sections in the corresponding archive in Uppsala. Maja Forsslund herself pointed out that the notes had been written down by an amateur. That type of enlightened amateur carried out invaluable work out in the rural areas when it came to gathering notes. This may be compared with Märta Tamm-Götlind’s contributions together with her husband Johan Götlind in the province of Västergötland.

The summer course in 1920 also resulted in the publication mentioned above: Från Ljusnarsbergen. However, it was not until 1960 that the elderly Maja Forsslund had the opportunity of publishing part of the extensive interview material in the comprehensive home district book Ljusnars-Kopparberg, published by Nya Kopparbergs Bergslags Hembygdsförening. This home district association’s epithet ”Nya” was used to distinguish it from Stora Kopparberg in Dalarna. The association had been founded in 1923 and Maja Forsslund belonged to its innermost core. On the association’s website there is a good deal of information on her in digital files.

Maja Forsslund’s contributions to the notes on the religious folklore of Kopparberg were thus significant. She also participated in gathering objects for several museum collections that were assembled by the home district association. She wrote a more personal text for the first part of the association’s book in 1960 under the title ”En färd genom Kopparbergs kyrkby för hundra år sedan”. In this text, she remembers her ancestors’ activities in the old mining community.

Maja Forsslund died in 1967. She lies buried in the family tomb of her maternal grandfather Erik Eriksson Öhman at Ljusnarsberg Church in Finnhyttan. 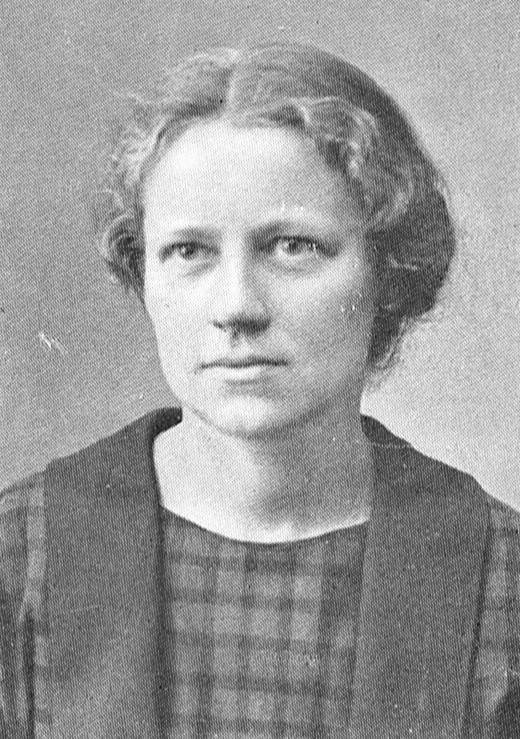