Ingeborg Sjöqvist was a leading international diver during the first half of the 1930s.

Ingeborg Sjöqvist was born in Kalmar in 1912. It is highly probable that her interest in diving was influenced by the success her elder sister Lala Sjöqvist enjoyed within that sport. Just as Lala Sjöqvist’s series of championship wins came to an end her little sister took up the slack. Ingeborg Sjöqvist belonged to Kalmar Simsällskap (swimming association), just like her sister, and became the Swedish champion of the straight dive in 1930. The name of the event she competed in changed to ‘varierade hopp’ (varied dive) for the next 15 years. Ingeborg Sjöqvist won this event at the 1931 and the 1933–1935 Swedish championships.

Ingeborg “Kickan” Sjöqvist competed in two European championships. She achieved second place at the 1931 European masters, held in Paris, and hers was one of the few Swedish successes at this competition. At the European masters in 1934, held in Magdeburg, she similarly won the silver medal. She was once again the only Swede to climb the podium.

Ingeborg Sjöqvist represented Sweden at two Olympic games. At the 1932 Los Angeles Olympics she was the only woman in the Swedish team, which numbered 56 members. She delivered a fine series of dives and before her final dive she was ranked second. However, her final dive was not as good and she landed in fourth place by the smallest of margins. At the 1936 Berlin Olympics Ingeborg Sjöqvist was one of a number of Swedish female competitors: her own diving event included Ann-Margret Nirling. 22 women from 10 different nations began the event. The Swedes ended up ranked ninth (Sjöqvist) and tenth (Nirling). After 1935 Sjöqvist did not compete in the major masters. It was indeed Ann-Margret Nirling, Sjöqvist’s fellow competitor in Berlin, who became the top female Swedish diver in the ensuing period.

Ingeborg Sjöqvist continued to be heavily involved in sports after her active career had come to an end. She married Lennart Ingers in 1939 and the couple settled in Blekinge. At different times they were both involved in Kristianopel GoIF, as chair and secretary, respectively. The family moved to Helsingborg during the second half of the 1950s. Ingeborg Sjöqvist became heavily involved in the then active gymnastics association Turn in the role of its gymnastics instructor. 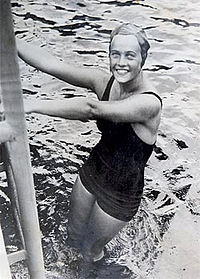