Ingeborg Wikander was an important figure within the Swedish students’ and highschoolers’ Christian movement of the first half of the twentieth century. She also spent time in China as a missionary.

Ingeborg Wikander was born in Stockholm in 1882. She was the third of eight children in her family. Her father, Ture Wikander, was a postmaster. The family moved several times during Ingeborg Wikander’s childhood. She gained her school-leaving certificate in 1901 from the Åhlin school in Stockholm. One of the school’s directors, Lydia Wahlström, had then put her in contact with the Christian student movement and this came to be of great significance in her later life.

After attending a student gathering at Läckö in 1901 Ingeborg Wikander arrived as a brand new student in Uppsala where she joined a Christian student group. It was not long before she became a female representative on the executive of the newly-established Kristliga studentförbundet (Christian student federation). She also joined the Fischerska cookery team, which several of the members of the group belonged to. Along with her friend [] Siri Dahlquist), and other female students, she laid the groundwork for what later became Den kvinnliga kristna gymnasiströrelsen (female highschoolers’ Christian movement) in 1908. Whilst engaged in these activities she also met Ruth Rouse, the influential leader of Kristliga Studentvärldsförbundet (world student Christian federation), with whom she formed a lifelong friendship. Inspired by Harald Hjärne’s interest in Asia and Nathan Söderblom’s lectures on the history of religions, and thanks to her own linguistic skills, Ingeborg Wikander prepared the way for the movement’s work in the coming years. She gained her Bachelor’s degree in 1904 and then moved home to Kristianstad where her family was living in order to take a job as a teacher at the Kristianstad girls’ school.

Ingeborg Wikander had been involved in setting up Svenska Kvinnors Missionsförening (SKMF) (Swedish women’s missionary association) in 1903 and three years later, in 1906, she succeeded Elin Nordin-Silén as the organisation’s secretary. Shortly afterwards she went on a more than three-month long trip to India, Japan, China, and America on behalf of the SKMF. She visited the Swedish Church mission in southern India. She then was one of four Swedish representatives who attended the world student conference in Tokyo in 1907. As a result of her travels she published several pieces of writing, primarily the book Ur Japans inre liv, in 1910. Further, she was influenced by John Mott’s preaching during his visit to Sweden in 1909 and by the concept of a national church which was being promoted within the youth church movement. Ingeborg Wikander’s friend, Manfred Björkquist who founded Sigtunastiftelsen (trust), was a leader of that movement. When Ingeborg Wikander undertook another set of world travels in 1913 her interest in the missionary cause was piqued.

Gradually Ingeborg Wikander became increasingly involved in social welfare efforts for young girls and she was particularly keen that female workers and students should have the chance to meet. She actively arranged summer gatherings for female workers and students and as a result of these meetings – partly inspired by the settlement movement – what became known as the ‘stugrörelse’ (hut movement) emerged. These efforts led Ingeborg Wikander to develop an interest in the activities of Kristliga föreningen av unga kvinnor (KFUK) (young women’s Christian association). Along with Märta André she was chosen to manage the enterprise at Gårdabo, which was a KFUK farm in Gothenburg, and the two of them also set up a stugförening there. It was not long before her KFUK engagement took Ingeborg Wikander abroad again as a missionary.

She left for China from Gothenburg in the spring of 1916. After crossing to New York, Ingeborg Wikander traversed the American continent in a six-week journey arranged by the Young Women’s Christian Association (YWCA). She then travelled by boat from San Francisco to China, where she spent the first six months at the headquarters of the Chinese section of the KFUK in Shanghai, living with the secretary general of the Chinese KFUK, Grace Coppock, amongst others. She and her language teacher then moved to Nanjing where she continued her studies whilst being accommodated at the newly-established Ginling College. After spending a year in Nanjing she moved to Changsha where she was tasked with setting up a new KFUK branch, founded in 1919 with an executive committee comprising Chinese women and for which Ingeborg Wikander served as secretary general. In the ensuing years she ran the enterprise in close association with Chinese secretaries and committees, the hostess Zuo, as well as other mission secretaries, including two Swedes, Ruth Nathorst and Willy Stenfelt.

After having spent five years in China Ingeborg Wikander made a temporary return to Sweden in 1921. She spent much of her time travelling around and giving talks, but also managed to write two books, Studier och bilder från det nya Kina, published in 1922, and Fem år i Kina, published in 1923. The former particularly focused on the changing role of women in China whilst in the latter she focused on her own experiences during her early years in China. Following almost a year in Sweden she returned to China, where she rejected the offer of running the KFUK’s national student organisation, opting instead to continue working in Changsha. As secretary general of the KFUK in Changsha Ingeborg Wikander’s time was largely taken up with administration and poor relief efforts. Ingeborg Wikander decided to leave China in 1927 due to regional conflicts and a growing threat towards both foreigners and domestic Christians as a result of Guomintang’s northern campaigns. She made a stop in India en route to visit the Swedich Church mission there and then returned to Sweden for good.

Once she was back in Sweden she took over the role of association secretary of the Swedish KFUK, and she held this post until 1931. She engaged in social welfare work and one of her achievements was to establish a ‘hemgård’ in Uppsala following the model of Birkagården in Stockholm. She also published another book, entitled Sökare efter Gud, in 1932. 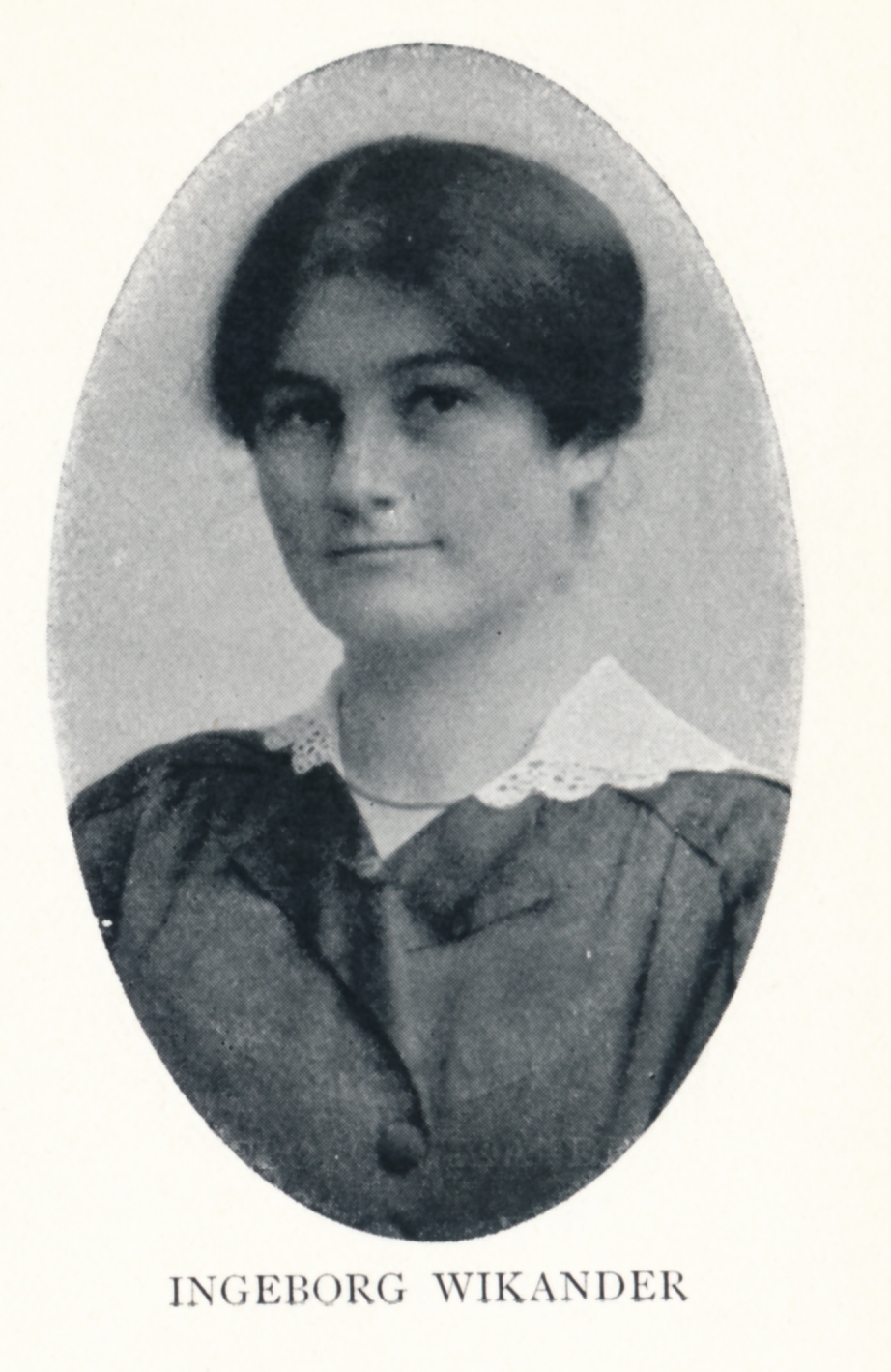