Ingegerd Levander was a businesswoman and a leading individual within the Swedish tar export industry of the 1900s. She was active within Allmänna valmansförbundet (the General Electoral League), later known as Högerpartiet (right-wing party), within which she held many board positions.

Ingegerd Levander was born in 1901. She grew up alongside her three siblings in Scania. Her parents were Hulda Nilsson and Adolf Weibring, an agricultural inspector. Once she had gained her school-leaving certificate she travelled to Vindeln in Västerbotten where she took a position as a governess. She worked for the Gram family for about a year. It was during this period that she met Birger Åström, the son of Anders Åström in Vindeln, who was a share-owner and one of the founders of Umeå Tjärexport AB (UTAB) (Umeå Tar exports company).

Following her year in Vindeln Ingegerd Levander continued to work as a governess in Viken, Ramsjö in Hälsingland. She then attended the Elisabeth Östmans Husmodersskola (domestic housekeeping school) in Stockholm. In 1923 she married Birger Åström and moved back to Vindeln.

Given that her late father-in-law Anders Åström had died in 1915, the Åström family sold their share of UTAB. However, the new owners fell into financial difficulties and the company was restructured, albeit to no avail. This led to the company going bankrupt and eventually being sold. The company’s retail section was sold separately whilst the remaining enterprise, along with the trademark, were sold back to Birger Åström and J.R. Johansson in February 1925.

Ingegerd Levander and Birger Åström had two daughters during the 1920s, named Anne-Marie and Inger. Ingegerd Levander took an interest in the business and in the family enterprise from an early point. She would accompany her husband to forest sites and would go through the account books. Whilst doing so she discovered irregularities within the company, including highly-paid individuals who were not performing their jobs properly. When she pointed this out to her husband he told her to investigate the matter. As a result Ingegerd Levander then undertook to get training by taking short courses in Stockholm in subjects like type-writing and business matters, and in January 1931 she began to work at the UTAB offices.

Birger Åström died suddenly from a brain haemorrhage on 27 April 1931. At that time their daughters were just 3 and 6 years old respectively. The Åström family, Birger’s mother Ellen Åström, and his siblings Astrid and Filip, held a family meeting and decided that his newly widowed wife should become the new managing director of the company, thereby taking over her late husband’s various roles as the family representative of Degerfors Qvarnaktiebolag and Vindelns Såg och Vattenkraft AB. Ingegerd Levander was already involved in the business and could therefore take over her late husband’s work.

In December 1932 Ingegerd Levander went on her first business trip. She travelled to Norway. Just one year later, in January 1933, J.R. Johansson left the company and Ingegerd Levander became its sole director.

When Ingegerd Levander took on the business the foreign trade market was unstable. There was no particular demand for the Dalbränd Västerbotten tar despite its good reputation. However, through Ingegerd Levander’s efforts the company became a leading example of the trade.

During her business trips to Norway Ingegerd Levander experienced several breaches of trademark where rival companies bought up empty barrels marked as Umeå Tjärexport AB and then filled them with lower-quality tar in order to sell them in the guise of high-quality Västerbotten tar. During the 1930s Ingegerd Levander won a four-year long legal case in which she successfully protected the UTAB trademark. Around this time she also proceeded with a similarly lengthy case regarding the water rights for the Degerfors mill. She successfully won all her claims in this case too.

In 1935, Ingegerd Levander married chief constable Torsten Levander. The following year they moved to Vilhelmina where Torsten Levander took up an appointed post. Ingegerd Levander travelled frequently. She placed great importance on meeting the tar producers in person and on visiting the tar kilns. This was particularly relevant given that she paid in advance and the tar production process is a slow one. The process, when viewed in its entirety, took more than a year as the stumps had to be felled during the autumn, and then the actual tar kilns were laid out at mid-summer, and emptied the following autumn in order for the tar to finally be sold the next spring.

In the summer of 1938 Ingegerd Levander went on study tours to Germany and Italy in order to improve her language skills. Following the outbreak of the Second World War tar exports ceased. Certain exporters were then selected and authorised to undertake trade in tar. UTAB was one of these select companies and Ingegerd Levander was the sole female active in this sphere.

In 1945 the Levanders moved again as Torsten Levander had received a new appointment in Umeå. Ingegerd Levander became the first woman to ever be elected as second deputy-chair of Västerbottens högerförbund in 1946. The following year she became chair of Umeå stads moderata kvinnoförening, although she resigned from this post that same year. She remained an ordinary board member from 1948 to 1955. For a time she also served as Länskvinnoordförande (chair of the county women’s association) of Högerkvinnorna as well as being a member of the right-wing party Centrala Kvinnoråd (central women’s council).

Alongside the political work Ingegerd Levander also sat on the board of several other associations and companies. It was not unusual for her to be a founder member of various associations and then to take on the post of chair. For example, Kvinnoföreningarnas beredskapskommitté (women’s associations’ emergency committee) in Umeå elected Ingegerd Levander as their president in 1952, and during the 1960s and 1970s she served both as district president and charter president of the Västerbotten Inner Wheel. She was managing director of Degerfors Qvarnaktiebolag from 1931 onwards and from 1963 she was also chair of the board. She served as secretary of the board for Vindelns Såg- och Vattenkraft AB from 1931 until 1964 when she became the chair.

Ingegerd Levander remained in Umeå until her husband retired. At that point the couple returned to Vindeln. Ingegerd Levander ran UTAB right up to the early 1980s when she was nearly 80 years old. In her role as director and owner of UTAB Ingegerd Levander became known as “Tjärdrottningen” (the Tar Queen), a strong-minded woman of authority who held leading positions within companies, politics, and associations.

Ingegerd Levander died in 1996 just a few months before her 95th birthday. She saw out her days at the Åström farm in Vindeln. 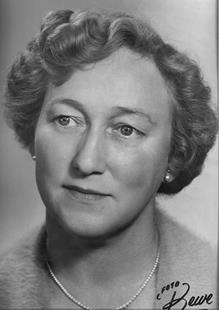