Ingrid Osvald was a domestic science teacher in rural housekeeping, but worked mostly in teacher training, and also as an author, school administrator and politician during the first half of the 1900s. She was one of the most eminent persons in domestic science education of her time.

Ingrid Osvald was born in St Peder’s parish in Gothenburg in 1896. Her mother Hulda Charlotta Olsson, née Börjesson, was a farmer’s daughter and her father Carl Olsson was a captain in the merchant navy. The family’s seven children were all given good educations despite the cost. For Ingrid Osvald, this meant a girls’ school in Gothenburg. Her father wanted her to matriculate, but Ingrid Osvald opposed that since it was not necessary when applying to be a domestic science teacher. Instead she worked as a governess in Dalarna after completing her studies at the girls’ school in 1914. She then completed studies at the rural domestic science school in Mora started by the couple Anders and Emma Zorn.

After that, Ingrid Osvald trained as a rural domestic science teacher at the Fackskolan för huslig ekonomi in Uppsala in 1916–1918. The principal there, Ida Norrby made Ingrid Osvald her protegée. Shortly after qualifying, at a remarkably young age, she was appointed as a teacher and principal at the Fackskolan’s rural Lanthushållsseminarium outside Uppsala. Ida Norrby helped Ingrid Osvald at the start of her career, among other things by seeing to it that she was able to study abroad. At the beginning of the 1930s, Ingrid Osvald travelled to the USA on the Swedish-American Foundation’s scholarship, to study domestic science education and the information enterprise that the American Agricultural Department provided for women in rural areas. The trip made a permanent impression on Ingrid Osvald and influenced the Swedish home consultant enterprise that was formed after the American model. Ingrid Osvald had herself a role in introducing this advice function for women in agriculture in Sweden. During the 1930s, she was both active in forming opinions and as an expert in several enquiries into farming women’s living and working conditions, among them the 1937 home consultant enquiry.

The 1930s were a significant and formative period in Ingrid Osvald’s professional life. During that decade, she took on herself and was allotted several assignments apart from her post as principal at the Lanthushållsseminarium. She was appointed as the Kungliga Lantbruksstyrelsen inspector for agricultural domestic science schools and involved herself in Sveriges Husmodersföreningars Riksförbund (SHR, now Riksförbundet Hem och Samhälle), as among other things a collaborator in their members’ magazine. Parallel to this, Ingrid Osvald made a name for herself as the editor of a series of manuals and textbooks for farmers’ wives and rural domestic science schools, published by LT:s Förlag AB. The books sold in large editions and were to be found in practically all farming households in the country. All this contributed to establishing Ingrid Osvald as the foremost authority in the country on matters concerning farming women’s professional education and living conditions in farmers’ homes.

Ingrid Osvald’s competence was in great demand in the 1930s and 1940s, which is clear from the many state enquiries in which she collaborated during that period. She was among other things a member of the population commission and the single investigator on the future organisation of domestic science education. Ingrid Osvald’s contributions as an investigator and state inspector pave the way to a place in the first chamber in parliament for the Liberal people’s party (Folkpartiet) and as a senior administrative officer on the Board of Directors for professional education at the end of the 1940s. As the latter, Ingrid Osvald was responsible for domestic science education. In 1951, she married the county governor for Gothenburg and Bohuslän county, Malte Jacobson. The couple had no children.

Within her field of activity, Ingrid Osvald contributed to opening new doors for the teaching corps to which she herself belonged: rural domestic science teachers. She was driven by an ambition to professionalise it and other domestic science groups, and suggested this in the so-called Osvaldska report in 1950 on the organisation of domestic science education – that it should be centralised, state-run and greatly expanded. This was also what happened, though first in the 1960s and 1970s and not in the way Ingrid Osvald had wished. In an interview at the end of her life, she pointed out that her time as a parliamentary politician and senior administrative officer during the 1950s was governed by other rules than those she was used to in her woman-dominated professional field. As a school bureaucrat and politician, she found herself in a male-dominated world in which it was difficult to win respect for the women’s issues that engaged her.

Ingrid Osvald retired in 1961, but continued to be active in forming opinion and discussing domestic issues. At the end of the 1960s, she became a critic of what she called “men’s dominion over women’s issues”. By this she meant the problem that decisions on women’s education were taken by men without insight into or experience of domestic science education. As a pensioner, Ingrid Osvald also renewed her interest in domestic handicrafts. In 1961–1973, she was the chairperson of the Svenska Hemslöjdsföreningarnas Riksförbund (SHR) and under her leadership, this association grew and flourished. Through SHR, Ingrid Osvald reconnected with her passion for domestic handicrafts in general and weaving in particular.

Ingrid Osvald died in October 1987. She is buried in Örgryte Old Cemetery in Gothenburg. 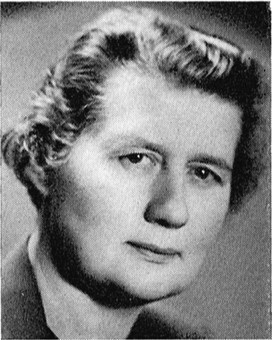