Ingrid Thulin was an actor, an instructor, a director, and a manuscript writer. She had a long and successful career in the Swedish theatre as well as in film and on TV.

Ingrid Thulin was born in Sollefteå in 1926. Her Norrland background came to the fore in her 1982 autobiographical film Brusten himmel but also found expression elsewhere. When she was 17 years old she moved to Stockholm, where she enrolled in the Påhlman business institute. She began her working life as an office worker but she also took acting lessons from Gösta Terserus and Willy Koblanck, as well as dance lessons from Lalla Cassel, in her spare time. Johan Falck took her on as his top student at the Norrköping-Linköpings stadsteater (town theatre) during the 1947–1948 period and in 1948 she gained acceptance at the Dramaten theatre school. Following her graduation in 1950 she spent two seasons working at the Dramaten theatre, making her public breakthrough in 1951 with her appearance in Jean Anouilh’s Dans under stjärnorna. She continued her training during the 1950s, taking mime lessons with Étienne Decroux in Paris. Indeed, her entire professional career was characterised by her attraction to international connections.

Ingrid Thulin got her first film role in Egil Holmsen’s 1948 film Känn dej som hemma. During the 1948–1957 period she went on to make 16 films, working with a variety of different directors including Åke Ohberg, Rolf Husberg, Hasse Ekman, Göran Gentele, Stig Olin, and Arne Mattsson. She also appeared in the American TV-series Foreign Intrigue which was filmed in Sweden. Further she played the lead role in Alf Sjöberg’s Domaren in 1960.

Ingrid Thulin would later distance herself from her earlier film roles which exploited her appearance and in which she “all blonde and beautiful, was supposed to run across some meadow hand in hand with a man”. During her 1956–1960 period of employment at the Malmö Stadsteater, where Ingmar Bergman was the theatrical director, she quickly gained more interesting and challenging roles as part of her lengthy working relationship with Bergman, both on the stage and the silver screen. She appeared in several of his most notable films and formed a major element of his particular cinematic expression. Her penetrating psychological character portrayals delivered modern, challenging and nuanced depictions of women on the stage and on the big screen.

The Malmö Stadsteater ensemble included many actors who later became associated with Ingmar Bergman’s creative output, such as Harriet Andersson, Bibi Andersson, Gunnel Lindblom, Naima Wifstrand, Max von Sydow, Gertrud Fridh, and Gunnar Björnstrand. Some of Ingrid Thulin’s performances – under Ingmar Bergman’s direction – at that theatre include Anitra in Ibsen’s Peer Gynt in 1957, and Rose in Hjalmar Bergman’s Sagan in 1958, the latter of which was also performed in Paris. At the same time she made her international breakthrough in the 1957 film Smultronstället – in which she played Marianne, Isak Borg’s daughter-in-law and candid, realistic travel-mate – and Nära livet, from 1958, based on an Ulla Isaksson manuscript. The latter was set in a maternity clinic and Ingrid Thulin was awarded a collective actor’s prize for it at Cannes (along with Bibi Andersson, Eva Dahlbeck, and Barbro Hiort af Ornäs).

At this time – when Swedish film was under the global spotlight – Ingrid Thulin appeared in a further six Ingmar Bergman films in the period leading up to the 1970s: Ansiktet, from 1958, Nattvardsgästerna and Tystnaden, both from 1963, the 1968 Vargtimmen, Riten, from 1969, and the 1972 Viskningar och rop. She also played the role of Indra’s daughter in Bergman’s 1963 TV-adaptation of Ett drömspel and the part of Rakel in his 1984 TV film Efter repetitionen.

As noted, Ingrid Thulin tended to be stereotyped as the “young, gorgeous, Swedish summer beauty” at the outset of her career. She herself has stated that Ingmar Bergman helped her to develop her acting talent by making her seem “ugly” and giving her more complicated and neurotic character roles and characters in unhappy relationships. Two of her successes in this type of role were her performances as one of the sisters in Tystnaden and as the teacher in Nattvardsgästerna, both from 1963. Together these films form 2/3 of what has been termed Bergman’s ‘great trilogy’.

Marianne Höök describes Ingrid Thulin as portraying “the Diana-type” in Ingmar Bergman’s films, namely “cool, intellectual, deliberate, anguished, serious, Vestal-like”. She is unthreatening and “does not claim a superior strength due to her sex”, instead she is “a man’s equal antagonist” and of all Bergman’s female actors is the one who “most easily allows herself to be considered a social creature”. When compared to the usual film stereotypes of the era Ingrid Thulin’s character portrayals in Bergman’s films stand out as displaying elements of superiority, dismissiveness, and iciness. She was actually responsible for introducing a new ascetic and intimate form of expression with audacity, presence, and psychological complexity. In many ways she represents the contemporary period in Bergman’s often historical and backwards-looking films.

From 1960–1962 Ingrid Thulin was employed at the newly-established Stockholms stadsteater. One of the roles she played was Miss Julie opposite Anders Ek’s Jean, directed by Birgit Cullberg. However, from this time forwards she increasingly began to spend her time abroad, in Great Britain, Spain, France, and in Italy, where she lived for quite some time from 1970 onwards south of Rome in Sacrofano. Her international career really took off during the 1960s. She appeared in Vincente Minnelli’s 1960 film De fyra ryttarna (The Four Horsemen of the Apocalypse), performed opposite Yves Montand in Alain Resnais’ 1966 film Kriget är slut (La guerre est finie), acted with Dirk Bogarde in the 1969 film De fördömda (La caduta degli dei) – Luchino Visconti’s cinematic fresco of the Third Reich – and opposite Burt Lancaster, Sophia Loren, and Ava Gardner in the thriller På andra sidan bron (The Cassandra crossing). International reviewers often compared Ingrid Thulin to Greta Garbo and Ingrid Bergman.

Whilst based in Italy Ingrid Thulin, in addition to her film acting, also performed on TV and on the stage, directed and taught performing arts at the Rome school of film and at a drama school. She also continued to make films in Sweden. In 1966 she played the role of the mother in Mai Zetterling’s Nattlek, and then the cook in Yngve Gamlin’s 1968 film Badarna, which is situated in a small Norrland community at the time that Sweden was undergoing structural changes as a nation. Ingrid Thulin directed her first film in 1965, a short entitled Hängivelsen. In 1978 she acted with Erland Josephson in En och en, which was also directed by her and Josephson and Sven Nykvist. In 1982 she made the film Brusten himmel, a film for which she had also penned the manuscript and which was awarded the prize for best debut film at the Chicago film festival. Ingrid Thulin published her memoires, Någon jag kände, in 1992. 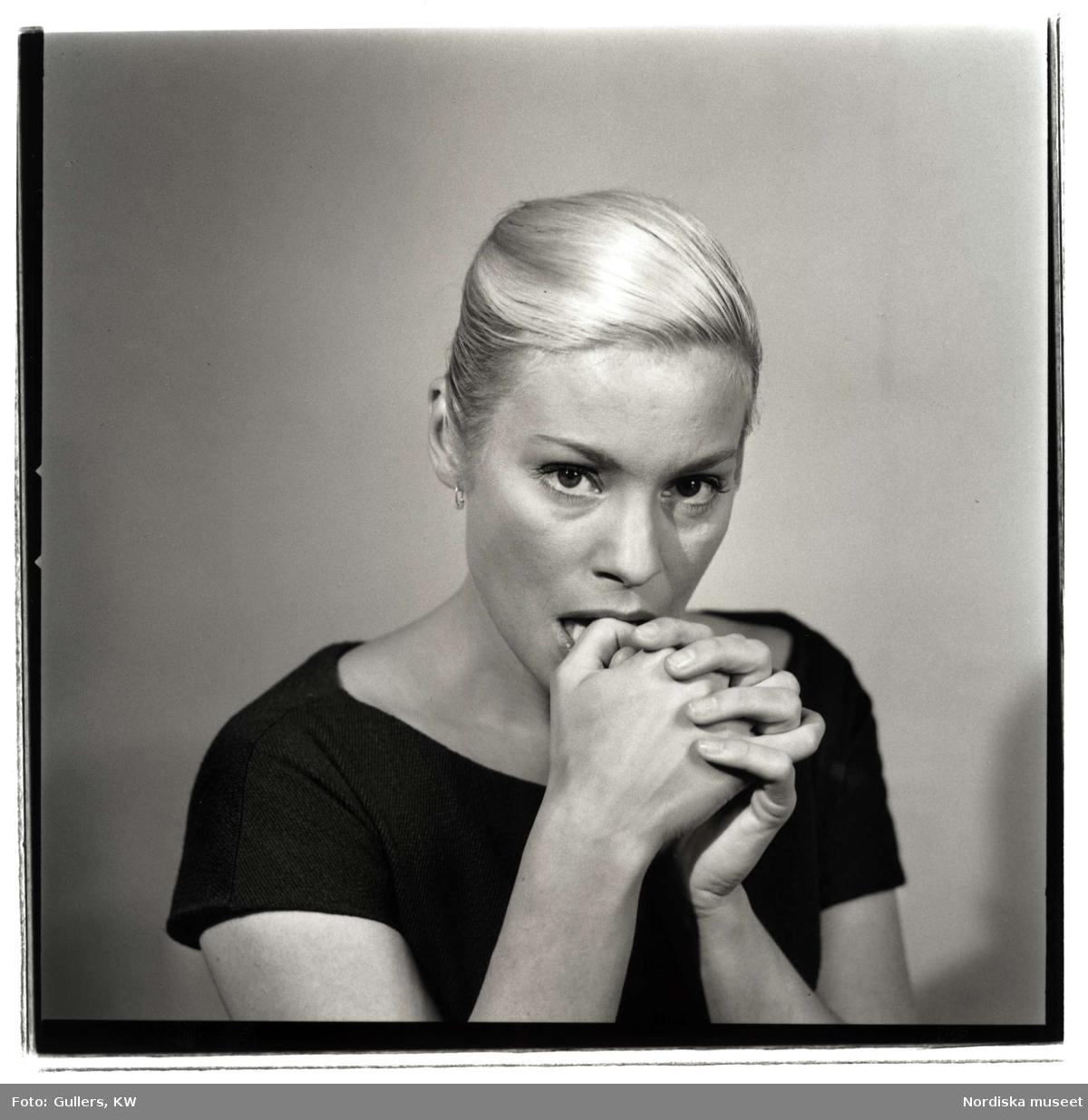