Jenny Åkerström was born in Lohärad, Roslagen in 1967. Her parents were Anton Åkerström, a public-school teacher and jack-of-all-trades, and his wife Maria Åkerström, who was described as a housewife according to the old-fashioned use of the term. The family also included Jenny Åkerström’s two younger sisters. Albeit not a wealthy family the Åkerströms benefited from the steady income provided by Anton Åkerström’s various occupations. Jenny Åkerström seems to have taken inspiration from both of her parents throughout her long life, revealing consistent evidence of both her father’s entrepreneurial spirit and of her mother’s dedication to household activities. Several sources testify to her breadth of interest in various social issues, subsequently reflected in the activities she engaged in, particularly her role in Jenny Åkerström’s domestic sciences school.

After completing her own schooling Jenny Åkerström spent some time working as a governess before enrolling in the Ateneum school cookery training programme, which she completed in 1897. During this period she and her sister moved to Stockholm. Her career really took off when Jenny Åkerström gained employment as a domestic sciences teacher on that same training programme. Ateneum, an established institution, was one of the early providers of trained domestic sciences teachers for which demand arose following the passing of the 1897 Schools Act. Jenny Åkerstöm taught on the programme and later became its director, remaining in post until she was succeeded by Tilda Hansson, who would also publish cookery books. In 1903 Jenny Åkerström became head of a number of mobile school cookery courses throughout the Stockholm area. This was part of a wider initiative aimed at disseminating practical skills in food preparation and household budgeting throughout the countryside.

In 1907 Jenny Åkerströms hushållsklola för flickor (domestic sciences school for girls) was founded in Stockholm. The pupils were taught to prepare both food for festive occasions and everyday meals as well as how to clean, wash dishes, and care for young children. Astrid, Margaretha, and Märtha, the daughters of Prince Carl and Princess Ingeborg, all attended the school during the 1920s. Jenny Åkerström had a good head for business and understood how to utilize her royal pupils in order to bolster her business and thereby attract further pupils and students. She published several cookery books, of which the best-known is Prinsessornas kokbok: husmanskost och helgdagsmat. It includes references to the favourite dish of each princess, different versions of more or less complex dishes, and – perhaps most importantly – recipes for green ‘prinsesstårta’ (a particular Swedish layer cake, ‘Princess cake’) which the majority nowadays connect with Jenny Åkerström and her school. Prinsessornas kokbok: husmanskost och helgdagsmat was later translated into English as The princesses cook book: From the original Swedish "Prinsessornas kokbok" and launched in the USA.

The pupils at the domestic sciences school primarily hailed from wealthy families who lived in the capital city. Jenny Åkerström’s books, meanwhile, were widely distributed throughout Sweden. These types of domestic sciences schools blossomed during the 1910s and 1920s and then gradually fell into decline in the 1960s. The evolution in attitudes towards women’s roles and their places within the labour market meant that these schools increasingly came to be perceived as old-fashioned and resulted in pupils who might have opted to attend domestic sciences schools instead choosing other educational institutions. Jenny Åkerström was, for most of her working life, also a regular contributor to various newspapers, including Bonniers Veckotidning, in which she had a recurring food column which included menus and recipes. She also wrote for two magazines: Vecko-Journalen and for Bonniers Månadstidning.

Jenny Åkerström married relatively late on in life. Her husband was a pharmacist named Bengt Söderström. In 1911 she moved away from her sister in order to live with her new husband, who, amongst other things, worked within radio. The couple had no children of their own but their foster son named Will is named as surviving them in their obituary published in the Dagens Nyheter newspaper in 1957. The obituary stated that Jenny Åkerströms hushållsskola för flickor had become famous not just for the advanced level of food preparation skills it taught but also for its pedagogical ambitions, not always to be found at other similar institutions. Following her death Jenny Åkerström and her sister, who had also been involved in teaching at the school, donated 400,000 Swedish kronor to the newly established foundation Systrarna Åkerström stiftelse för kyrklig ungdomsvård. The money primarily came from the school’s income and from sales of Prinsessornas kokbok: husmanskost och helgdagsmat. Today the handicrafts association Stockholms läns hemslöjdsförening awards an annual stipend to handicrafts students from Stiftelsen Jenny Åkerström-Söderström.

Jenny Åkerström died in 1957 and is buried at Norra begravningsplatsen (the Northern cemetery) in Solna. 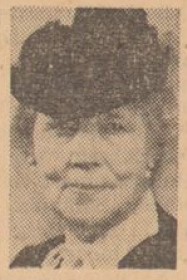