Julia Håkansson was an actress and a theatre director around 1900. She was considered the country’s most modern actress and the foremost of all those who played Henrik Ibsen’s female roles on the stage at that time.

Julia Håkansson was born as Julia Matilda Stenius in Stockholm in 1853. In 1873, at the age of only 19, she married Hjalmar Håkansson, a music director and opera singer, with whom she had five children in quick succession, of whom one died in infancy. This meant that the plans she had had since she was very young to become an actress were considerably delayed. However, after theatre studies in 1885—1886 for Signe Hebbe and Hedvig Charlotta Winterhjelm, and also tuition from August Lindberg in preparation for her debut, Julia Håkansson was at last able to take her place on stage at Kungliga Dramatiska Teatern in 1886, when she was 33 years old. Her first debut role, which was also the one of her three debut roles to win her the most acclaim, was as Nora in Ibsen’s A Doll’s House.

When Julia Håkansson made her stage debut as Nora in Ibsen’s A Doll’s House, Georg Nordensvan wrote that one “with pleasure” could establish “the absence of anything reminiscent of traditional cadences and movements. It was a fully modern, personal performance”. Karl Warburg emphasised in a very favourable review that Julia Håkansson’s interpretation of Nora’s role was “one of the most gripping seen of the newer Swedish art of acting”, with a performance “steeped throughout in simple, natural truth”. Other critics also expressed themselves lyrically about her way of skilfully presenting Nora as a modern woman. Her body language among other things was praised in the central scene where Nora dances her tarantella. Julia Håkansson showed in an innovative way how her indignation gets intensified into anger during this dance, which is of course performed while ignoring her husband Torvald’s irritated exhortations to her, his wife, to stop immediately from behaving with such inappropriate violence. Thus an already indignant Nora’s defiance towards her husband is interpreted by Julia Håkansson in this scene in a physically particularly expressive way.

After having made her stage debut in three completely different roles, not long after each other, Julia Håkansson had prospects of being engaged at Dramaten, but in her eagerness to continue her artistic development, she travelled instead to Paris to study French theatre during the spring and summer of 1887. Back home again from Paris, she accepted an offer from the Swedish Theatre in Helsinki, where she made several highly praised appearances during a number of months in the season of 1887—1888. After that, Julia Håkansson accepted an offer of employment from the actor, director and theatre leader August Lindberg in whom she had great confidence and who had at that point just started his own new theatre company. From the autumn of 1888, she was the prima donna in Lindberg’s ensemble for three seasons, and during those years she was able to play several Ibsen roles. It was also under the direction of August Lindberg that she became seriously acclaimed as an eminent stage creator especially of Ibsen’s female roles, and also as a very charismatic actress.

Julia Håkansson gave guest performances at various theatres in the Nordic countries, among others once again at the Swedish Theatre in Helsinki. However, from 1895 she was engaged for three years by Albert Ranft. After that, she and her companion Tore Svennberg toured rural towns with her own theatre company, but in 1899 she was again employed by Ranft and appeared for a couple of seasons at his theatres in Stockholm and Gothenburg as well as making guest appearances in Swedish rural towns and Finland.

She had great success as the first credible Hedda Gabler in Ibsen’s drama with the same name, that had its première in Gothenburg in March 1891. Particularly noteworthy about her interpretation of the complicated Hedda was considered to be that she was the first to succeed in turning the negative opinion of this drama that at first reigned among critics and create a positive attitude to it instead. She also received a great deal of praise for her way of interpreting and scenically creating Rita Allmers in Ibsen’s Little Eyolf in Gothenburg in January 1895.

In 1900, Julia Håkansson was divorced from her husband. She also resigned from Albert Ranft and once again from 1902 ran a travelling theatre company, in the beginning with Tore Svennberg but in 1905—1907 as sole leader of that company that she now named “Julia Håkanssons Teater”. Her last touring period in 1905—1907 has been treated by Peter Gripewall in an essay based on recent finds of hitherto forgotten material. He emphasises the high quality of her theatre enterprise. Moreover, he stresses that it was in connection with the tragic death of two of her sons within a short time around the end of 1906 and beginning of 1907, that Julia Håkansson lost her desire to continue running her theatre enterprise, which is why it was closed down in June 1907. Her sons’ deaths were of course a terrible blow for her. She had besides hoped that one of them, Erik, who was a promising young actor, would take over the leadership of her theatre. She had a third son, Anders, who participated more sporadically as an actor in her theatre, and her daughter Lisa, married Taube, who now and then performed in her mother’s theatre and also on other stages, above all Albert Ranft’s.

Julia Håkansson became permanently engaged at the new Dramaten at Nybroplan in Stockholm, that was inaugurated in February 1908, and there she came to perform once again with August Lindberg. In 1913, Julia Håkansson received the prestige-filled medal Litteris et Artibus from the King. She remained at Dramaten until 1929, when she resigned at 75 years of age. However, she continued to remain active throughout her life by privately accepting pupils for acting lessons.

Theatre director Helge Wahlgren described Julia Håkansson in Ord och Bild in 1929 as “Sweden’s Ibsen actress par préférence”. When in April the same year she left Dramaten, she received special attention in a farewell speech by the Head of Dramaten Erik Wettergren for the many Ibsen roles, altogether fifteen, that she had created. Wettergren emphasised that when she made her debut as Ibsen’s Nora in 1886 in A Doll’s House, it was as “the first modern actress on a Swedish stage”, and he clarified this assessment by stressing the following: “When Ibsen, Björnson, Strindberg called to battle, you stood like Hjördis in the foremost rank among the warriors”, with creations characterised by “presence in every nerve, the anxiety and truth of the times”. Those were big words from Wettergren, but he was not alone in thus characterising her. Many of the theatre critics of the time had through the years in similar ways pointed out that Julia Håkansson from the absolute beginning had created a sensation through her modern way of acting. By modern was meant the new demands on actors and actresses to move naturally in accordance with the demands of the times for reality in performance. Julia Håkansson measured up to these demands on the stage, which made Wettergren also mention in his speech “the pronounced modernity of her disposition”, since she had always been “in tune with the modern spirit of the times”.

Through her presentations of the women in Ibsen’s plays, Julia Håkansson made them into brilliant representatives of “the new woman”, the era’s new, emancipated type of woman who came to be related to the suffrage movement, feminism and entry into professional life. Simultaneously, she contributed to enabling Ibsen to win ever greater recognition from audiences and critics. People suddenly understood better how these female roles must be understood as being altogether modern women. Thus both Ibsen and Julia Håkansson benefitted from the increased recognition from the theatre audiences and the most influential critics.

Thus it is explicable why Julia Håkansson could be called not only Sweden’s most modern actress but also and especially “Sweden’s Ibsen actress par préférence”.

Julia Håkansson died in 1940, at 87 years of age. She is buried in the Northern Cemetery in Solna. 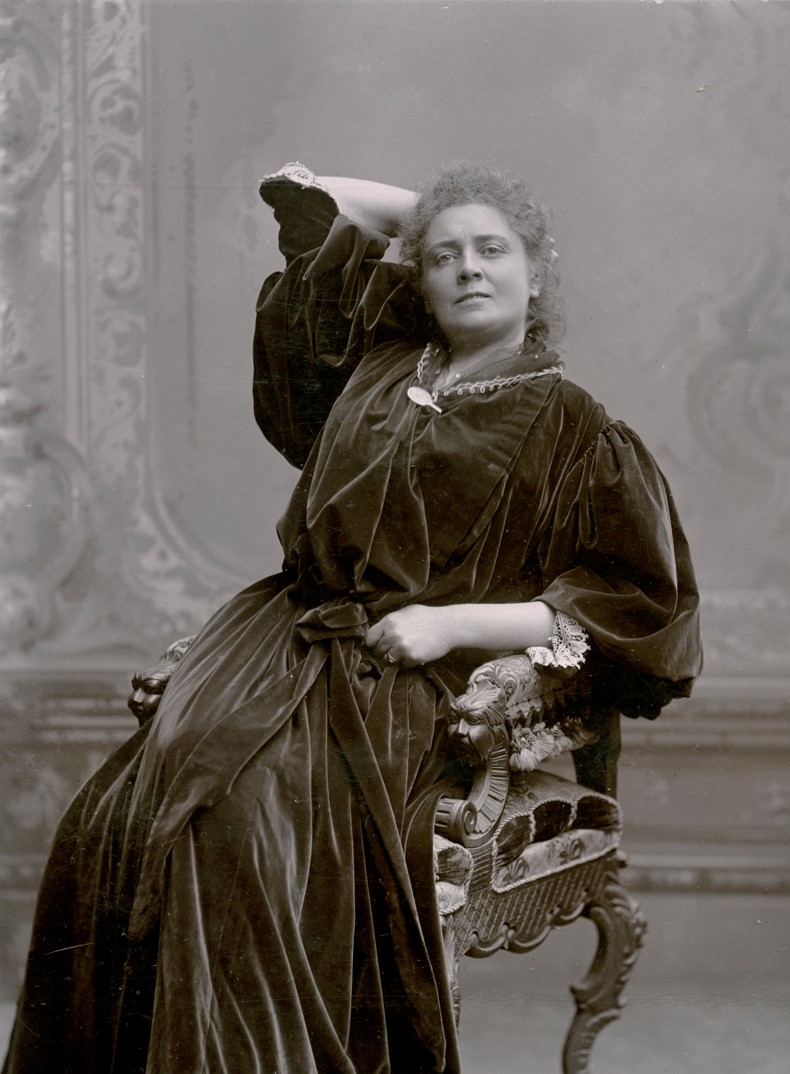