Kate Carpenter was a domestic science teacher, popular educator, writer, author of cookery books, and the first person in Sweden to be employed by a bank as a family economist.

Kate Carpenter was born in 1903 as the third of four siblings. She grew up in the country in Västra Frölunda, where her father had a market garden. Her mother was poor in health and the children had to help a great deal in the home and also with the gardening. Their maternal grandmother, who was deeply religious, saw to it that Kate Carpenter was able to start at the girls’ school Vasa flickskola, which at that time was run in “a specifically Christian spirit”. In school, she also learned social work. During the war, the pupils sewed dresses for girls in the neighbouring poor suburb of Haga, and organised Christmas parties for them. This religious upbringing characterised Kate Carpenter’s contributions throughout her life.

When Kate Carpenter had left her girls’ school in 1921, her father wanted her to apply to the telegraph agency where she would have a salary of 300–400 kronor per year. However, she wanted to become an elementary schoolmistress, inspired by her own teachers, but she could not go against the wishes of her fiancé. He was a furniture designer who died young, who thought she should get an education that would also be useful when they were married. So she became a domestic science teacher.

Preparatory training was a requirement for acceptance at the domestic science teacher training college in Gothenburg. Kate Carpenter spent 18 months with a family and on a farm. After that, her course took four terms, from August 1923 to June 1925. Through the principal Alma Peterson, the pupils acquired enthusiasm for the work and were spurred to take new steps in their activities. Kate Carpenter was to serve for 43 years in various schools in the city as well as at the Gothenburg domestic science teacher training college.

After qualifying, Kate Carpenter worked for a few summer holidays for the youth branch of the Red Cross, who ran a summer camp for grammar school boys from Gothenburg at the boarding school Lundsberg, where she was in charge of them. During the 1930s, she continued her education by taking several more courses run by different organisations. She also undertook study trips abroad, to among other places Denmark, England and Finland. In England, she met her husband-to-be, Stanley Carpenter. Their daughter was born in 1944. From her visit to Finland, she acquired knowledge developed in Germany about ergonomics, later incorporated in the work of Hemmens forskningsinstitut (a state-run home research institute). She also gained new insights from the domestic science teacher and national economist Laura Harmaja, who was studying the value of housewives’ unpaid work. New, scientifically underpinned findings were appearing all the time in Kate Carpenter’s field. It was important to learn about them and pass them on.

Continually revised editions of the textbook Kokbok från Göteborgs skolkök. Jämte hemmets ekonomi, närings- och födoämneslära (Cookery book from Gothenburg’s school-kitchens. Including home economy, nutrition and dietetics) by Alma Peterson, Erika Cavallin and Ellen Wadell had been used in domestic science teaching since 1913. When Ellen Wadell died, Alma Peterson invited Kate Carpenter to join them. The first edition with her name on it was the ninth, in 1939, and after that there were 14 more. She was then working with her superior Elsie Johnson who wanted the chemist and popular educator Iwan Bolin to take part. Their teaching thereby developed in a new direction; the recipe section shrank, the theoretical section expanded and the title of the book was changed in the 1940s to Födan – hemmet – ekonomin. Kokbok för skola och hem (Food – home – economy. Cookery book for schools and homes). When the new state compulsory school was introduced in Sweden in the 1960s, the subject was restructured with fewer lessons and less time for cookery, and the cookery book was discontinued. However, up until then, it is possible to follow the development of domestic science during a 50-year period, and see how diet changed during that time. The outbreak of war in 1939 brought with it a period of crisis, and domestic science knowledge and skills became extra important. Kate Carpenter and others were assigned by the Crisis Committee to communicate crisis housekeeping. She lectured, demonstrated and wrote brochures for exhibitions. With her colleague Maria (Maja) Ankar, she published Närande mat till billigt pris. Recept i ransoneringstider (Nourishing food at a low price. Recipes in times of rationing) in 1940. Other small booklets dealt with fresh fruit, vegetables and fish. Göteborgs Morgonpost, the paper that had organised one of the exhibitions, engaged Kate Carpenter to edit their women’s page “Kvinnan och hemmet” (The woman and her home) in 1942–1943 and ICA-kuriren also contacted her. There she was to write almost every week for 20 years under the signature Priscilla.

In ICA-kuriren, that reached 600,000 homes, Kate Carpenter developed further what she had begun in the early 1930s in Sunt Förnuft (Common Sense), a publication by Skattebetalarnas förening (Taxpayers’ Association): menus with nutrition and costs estimates, questions on whether housework was profitable and so on. She also drew up budgets. There were many tables in her articles, and she also recommended the rationalisation of housekeeping through using finished or semi-manufactured products and machines if and when they were economically possible. Housewives must acquire knowledge and she supported them, not least since the value of the Swedish krona was continually falling and prices went up. Housework had a value. More than once she referred to the marriage legislation of 1920 that among other things made statutory that cash incomes should be the property of both spouses. If they made up a family budget and went through the food costs together, it would make their lives easier. The older children should also be told what applied and contribute, too, when they received an income. The Carpenters cooperated in looking after their home and Kate Carpenter’s elder sister also assisted.

After the war, enterprise along these lines took off around the country. Banks organised courses and Kate Carpenter, “the well-known signature Priscilla”, was regularly engaged. In 1955, she was employed by the Gothenburg savings bank as a consultant in matters of home economy, the first post of its kind in Sweden. For some years, she was on leave from school work. She now had three different kinds of work: budget advice, lectures, demonstrations, and exhibitions. Budget counselling was especially close to her heart. All kinds of people came to ask for help. Budgets were made up according to the degree of necessity. It the money did not stretch, then one had to exclude what was least essential.

The Gothenburg savings bank, known as the “Family bank”, pursued economic information with special emphasis on domestic financial problems. During the 1955–1956 academic year, Kate Carpenter was engaged as a speaker at about seventy meetings that were organised by the savings bank or by women’s organisations, unions, schools and so on. She made great efforts especially to reach the younger generation and got the Gothenburg youth officer to help her visit youth clubs, among other things. She led study circles for circle leaders and took the initiative to, and designed, exhibitions of printed materials like “Kost för rimlig kostnad” (diet at a reasonable cost), where all the brochures were already taken before the last day when over 3,000 people had visited the exhibition. She lectured all over Sweden, for example in Örebro, Karlstad and Trollhättan. In Trollhättan she spoke to Fredrika-Bremer-Förbundet, and one reviewer called her a feminist. That was a word she never used about herself. She was quite simply dedicated to educating and helping women in practical ways. Ria Wägner invited her onto her family programme on TV: Hemma med Ria (At home with Ria), a pedagogical opportunity of which she made good use.

In order to learn more, get in contact with colleagues and share her experiences, Kate Carpenter often participated in courses and conferences in Sweden and abroad. The International Federation for Home Economics (IFHE) organised congresses to which she travelled, among others one in Edinburgh in 1953 and one in Washington in 1958. Kate Carpenter was elected as one of only a handful of women among the trustees at the Gothenburg savings bank/Länssparbanken in Gothenburg. She concluded her teaching career at the domestic science college in Gothenburg and retired in 1968.

Kate Carpenter educated herself all her life. Women could become empowered through education and knowledge. Nutrition and family economy were her forte and more important than her own person. On the other hand, she always spoke warmly about other clever women from the women’s suffrage generation and onwards.

Kate Carpenter died in 1994 in Gothenburg. She is buried in the Western Cemetery. 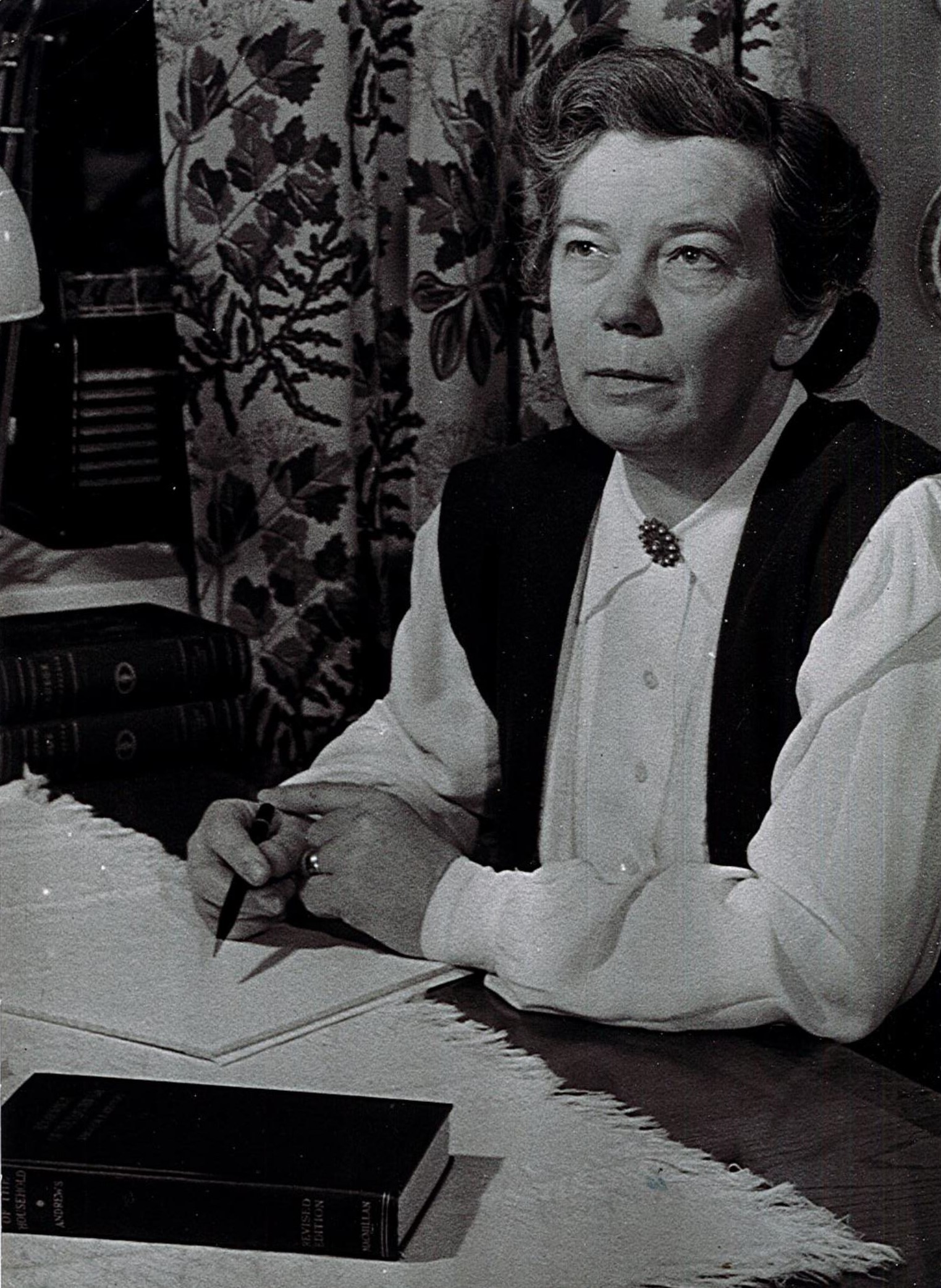