Kerstin Anér was a prominent politician and debater. As a member of parliament for Folkpartiet (the Liberal People’s Party, now Liberalerna), she was especially engaged in issues concerning research and the environment.

Kerstin Anér was born in 1920 in Stockholm, the daughter of Gunvor Anér, née Löfvendahl, a teacher, and Josef Anér, a director. Her brother was Sven Anér, a journalist at Sveriges Radio and Dagens Nyheter. Her father was originally a teacher, but ended up in business. The spouses started the Gunvor and Josef Anér Foundation for the promotion of research and the humanities.

After her matriculation in Gothenburg in 1937, Kerstin Anér continued her education at Gothenburg College (now the University of Gothenburg). She gained her Ph.D. in the history of literature in 1948. Her thesis was on Swedish press and literature history in the 1790s. During this period she also married Frans Hallström with whom she had four children.

When she had completed her academic studies, a broad professional career followed in the cultural sphere. Kerstin Anér was a colleague at Bonniers Litterära Magasin (BLM) and Idun and also a producer at Sveriges Radio in the 1940s to 1960s. She became engaged in politics early on. She was a member of parliament for the liberal Folkpartiet in 1969–1985 and when the right wing took over the government, she was appointed state secretary in the department of education in 1976–1980. She also sat in the Parliamentary Assemble of the Council of Europe (PACE) in 1980–1983 and was the chairperson of the Save the Children national association in 1978–1985.

In cultural debates and as a politician, she was engaged in a multitude of different subject fields. Her choices of subject as they appear in concepts and manuscripts in her private archive in the Riksarkivet include among other subjects animal rights, Waldorf pedagogy, anthroposophy, Christianity, equality, environmental issues, peace research and research into the future. She wrote debate articles on disparate subjects from the 1940s until the 1990s with titles like: “Are housewives of any use?”, “You and computers”, “The application of gene technique to human beings”, “Should women escape into professional careers?”, “Is God a man?”, “Bloody matriarchies”, “The manufacturable human being” and “Must we stop the world?”.

Kerstin Anér was invited to speak all over the country, and she developed an art of speaking that attracted many people to her meetings, and not only the meetings organised by local Folkpartiet branches. She was also religiously engaged and often spoke in churches. Kerstin Anér sometimes read aloud hymns that she had written and she is represented in the Swedish hymn book Den svenska psalmboken from 1986 by two songs: numbers 27 and 292. The latter, “Jublande lyfter vi här våra händer” is a translation of a text by Fred Kaan who was an important figure in the Christian peace movement.

Her cultural and political breadth might have attracted many detractors but that seems not to have been the case. The satirical writer Gunnar Unger saw her as early as in the 1960s as a positive, shrewd, honest and kind person who approached her goal in a straight and sure manner and was never afraid. When she came “steaming along in low-heeled shoes and a heavenly blue broad-brimmed hat with a tea cup in one hand and a notebook in the other, a plucky and knowledgeable fighter for her sex and her cause”, then one could rest assured that there would be results.

Kerstin Anér died in 1991. Her ashes rest in the memorial garden in Ytterjärna Cemetery south of Södertälje. 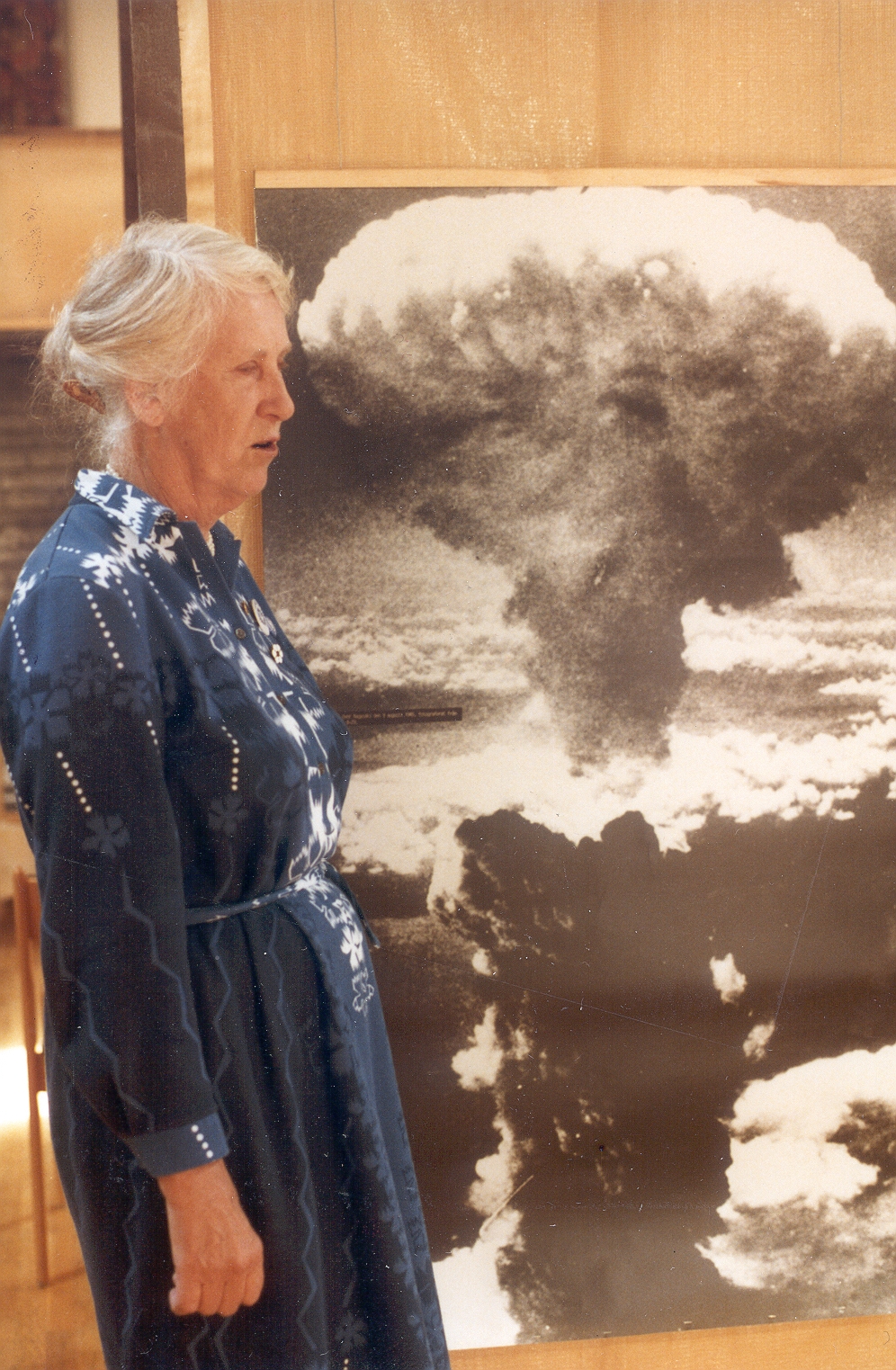 Kerstin Anér in front of an image of a nuclear detonation. Photographer and date unknown (KvinnSam, Gothenburg University Library, B36)