Nurse, nursing inspector on the Medical Board

Kerstin Nordendahl was the first nursing inspector on the Medical Board and played a key role in the development of health care and the nursing profession in Sweden during the first half of the twentieth century.

Kerstin Nordendahl grew up in Borås, where her father was a teacher and a schools inspector. She later moved to Stockholm. Her brother went on to become an engineer and he too settled in Stockholm. The siblings were close and apparently shared a home in the nation’s capital. Kerstin Nordendahl, despite being a woman, gained what in her day was considered a very good education. Once she had completed her schooling at Nya Elementarläroverket för flickor (new elementary school for girls) in Gothenburg in 1899 she continued her training by taking courses in home economics and handicrafts, possibly with the intention of becoming a teacher. In 1902, however, she changed track and began a nursing course at the Sahlgrenska hospital in Gothenburg. She also completed the Sophiahemmet nursing school programme in Stockholm, which was one of the pre-eminent training courses in Sweden. Those who became Sophia nurses remained tied to Sophiahemmet after completing their studies. As the conditions there were very strict after a few years Kerstin Nordendahl transferred to the Red Cross. She then worked as the head nurse at the Sabbatsbergs hospital in Stockholm, undertook yet more training, supervised students, and even served in an international capacity – for example, in Greece in 1913 during the Balkan war. Kerstin Nordendahl did not marry. Before 1939 women were let go from their state jobs if they got married.

The expanding health service, largely at hospitals across the nations, generated a constant need for skilled workers, which placed the nursing schools in the spotlight. In 1910 a group of well-educated nurses in Stockholm set up Svensk Sjuksköterskeförening (SSF) (Swedish society of nursing). This society quickly found favourable reception for its primary demand: that the state regulate and check nursing qualifications. Kerstin Nordendahl was appointed the first nursing inspector on the Medical Board where she was tasked with regulating the nursing colleges and their work as well as the conditions for the female medical staff. She held this post from 1920 until she retired in 1944. During her time on the Medical Board she also collaborated in and influenced the implementation of a range of socio-political reforms within the health service. During the Second World War she was also responsible for organising nurses within military health service.

Standardising the training of nurses was one of Kerstin Nordendahl’s most comprehensive contributions. This occurred incrementally throughout her time as inspector as requirements for knowledge, both theoretical and practical, became more demanding. Several nursing schools were closed following inspection by the Medical Board during the 1920s. Although this resulted in a decreased nursing corps those who completed it were well-trained. Kerstin Nordendahl also saw to it that the state took responsibility for the training of nurses so that the programme was modernised and the pedagogical aspect was developed.

For many years Kerstin Nordendahl was heavily involved in the training of district nurses as well as the establishment of Statens sjuksköterskeskola (national nursing school) in 1939. She took an interest in preventative health care from an early stage. However, improving the working conditions for female staff remained a challenge. The Medical Board was only able to provide recommendations to employers, for example on issues surrounding their long working hours. The nursing corps was also divided when it came to questions of salaries and working hours. SSF split in 1933 due to difference in opinion on whether working hours for nurses should be regulated or not.

Kerstin Nordendahl always worked in close collaboration with SSF, both in order to implement new reforms and in order to generate new ideas. She also had an extensive network of contacts among the nurses throughout Sweden. Further, she was active on behalf of nursing issues on an international level. She undertook several study trips, to places like England and the USA. In 1947 she was awarded the prestigious Florence Nightingale medal by the International Red Cross Committee (ICRC).

Kerstin Nordendahl died in 1958 and is buried at the St. Birgitta burial ground in Borås. 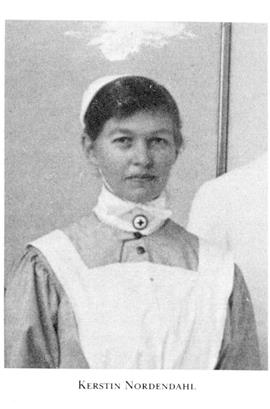