Kristina Borg was a newspaper publisher, suffragette and peace worker.

Kristina Borg grew up in a farming family at Västra Broby east of Helsingborg. She was the sixth child of eight. In the 1860s, she moved to Helsingborg where she started working as a clerk at the daily newspaper Öresunds-Posten. In 1869, she married Fredrik Theodor Borg who had been the paper’s editor in chief since 1855. Öresunds-Posten was then categorised as a liberal newspaper that among other things pleaded for Sweden to become a republic.

When Fredrik Borg died in 1895, Kristina Borg took over the ownership of the newspaper and its printing house. Axel Svenson became the new political editor. In 1913, Kristina Borg also took over the role as publisher. During the whole of her time at the newspaper, Kristina Borg was the one who took care of its economy, and she was also the permanent sounding board for it editors. She was responsible for the contents of the supplement about homes “Våra hem”, that accompanied the newspaper once a week from 1906 onwards. On her 75th birthday in 1919, Karolina Widerström wrote in the suffragette magazine Rösträtt för kvinnor about her work at the newspaper: “her economic ability as well as her journalistic gifts were put to good use”. Right until shortly before her death in 1928, Kristina Borg was totally responsible for the newspaper. On account of increasing competition and high costs for investments in new technology, the economy was utterly run down and Kristina Borg, at the age of 84, saw no other way out than to sell the newspaper.

Kristina Borg was engaged in a great number of social activities in Helsingborg, both of the kind that were run by the municipality and by associations. In 1895, she was a member of the board for setting up a children’s asylum in Helsingborg. When an association was started for summer camps in Helsingborg in 1900, she was appointed as the cashier and “first manageress”. She was also a board member for the association Helsingborg’s cottage workplaces that started in 1904 with the aim of providing schoolchildren with employment in the form of handicrafts and trades. Simultaneously, she was a board member for the labour exchange in Helsingborg, where she was one of two representatives for “women’s work”. In 1911, Kristina Borg was the first woman to be elected to the board for poor relief in Helsingborg, a post she held until 1920. She had several unpaid municipal assignments, as member of the infant homes committee and the confinement home committee, both from the end of the 1910s.

Fredrik Borg was a pioneer when he was the first member of parliament to make a motion in 1884 on the introduction of women’s right to vote. Kristina Borg shared her husband’s engagement in the suffrage issue and was the chairwoman of Helsingborg section of the National Association for Women’s Suffrage, from its foundation until it was dissolved. She was also a member of the National Association’s central board.

Like her husband, Kristina Borg was also active in the peace movement. She was one of those who signed an appeal published in the major national daily newspaper Dagens Nyheter in June 1897, asking Sweden’s women to support the “issue of peace”. In 1898, encouraged by Anna Lindhagen, she became a member of the women’s peace association Sveriges Kvinnliga Fredsförening and in 1906 she was one of two Swedish delegates at the international peace conference in Milan where she participated in the same session as Bertha von Suttner, who had been awarded the Nobel Peace Prize in 1905.

The Borg couple’s home in central Helsingborg was situated in the same building as the newspaper’s editorial office and the printing press, and they had close, almost family ties to staff and colleagues at the newspaper.

Kristina Borg died in September 1928 and was buried in the same grave as Fredrik Borg at the New Cemetery in Helsingborg. 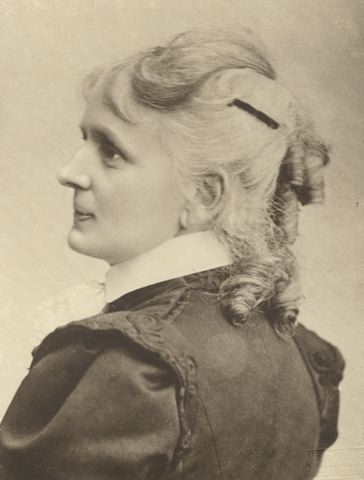