Stina Rodenstam was born Kristina Maria Jansson at a farm in Eke village, Skuttunge parish, barely two Swedish miles north of Uppsala, in 1868. Her parents were Johan (Jan) Jansson, a farmer, and his wife Maria, née Olsdotter. After completing junior school in Skuttunge, Stina Rodenstam, then aged nine, went to live with an elder sister in Uppsala. There she attended Agnes Mesterton’s private vocational school during the spring and autumn of 1887 where she learned sewing and weaving techniques.

In the autumn of 1888 Stina Rodenstam attended a weaving course run by Handarbetets Vänner (HV) in Stockholm. There she learned traditional weaving techniques which HV had assembled from various parts of Sweden, including: “opphämta”, pile rugs (with or without ornamental edges), “dukagång”, rosengang, röllakan, “krabbasnår”, “munkabälte”, “dalvävnad” and canvas. Stina Rodenstam adopted HV’s ideology of preserving the old skills, transmitting them onwards, and developing them and adapting them to suit modern demands. In the spring of 1891 Stina Rodenstam attended Palmgrenska skolan (later known as Palmgrenska coeducational school) in Stockholm. In June that year she qualified as a handicrafts instructor, achieving top marks – “A in proficiency” – for linen sewing, general embroidery, knitting, cutting, bobbin lace and more.

Stina Rodenstam’s first teaching post in handicrafts was at Ateneum för flickor (girls’ school) in Stockholm whilst she also taught on Ateneum’s teacher-training programme in women’s handicrafts, teaching new cohorts of female weaving instructors. A new subject was being prepared at Ateneum, namely domestic sciences, and the school’s principal suggested that Stina Rodenstam should study this topic. It was arranged in such a way that she could complete her studies whilst still working as a teacher and thereby she gained her teaching qualification in domestic sciences as well. Stina Rodenstam now began to train female school cookery teachers and by the time she finished her job in 1894 she had trained two cohorts of teachers.

In 1894 Stina Rodenstam married Frans Rodenstam, an assistant teacher and museum director. The couple settled in Hudiksvall, where they had two children, Greta and Sven. Stina Rodenstam never settled down to solely being a housewife. In 1894 she was tasked with organising the teaching of domestic sciences at Hudiksvall public school and she was appointed inspector of the subject for the town’s schools. In 1897 she opened a private handicrafts and domestic sciences school which was also a boarding school. Ten years later the school was expanded to include a teacher-training course. The school closed in 1914.

Stina Rodenstam was also active with the sphere of social welfare. During her time in Stockholm she had gained notice for her skills and following the disaster year of 1902 she was tasked by Stiftelsen Lars Hiertas Minne to travel, on behalf of the national central emergency aid committee, to the Sami areas of Västerbotten and organise workhouses. Stina Rodenstam was also the instigator of several social welfare efforts within her hometown: in 1903 workhouses for school-age children were opened, in 1905 a special day called Barnens Dag (Children’s Day) was instituted, and in 1908 a local First of May flower committee was set up.

Stina Rodenstam was more than a shining example of female emancipation herself just as industrialisation was being introduced into Sweden. She also campaigned actively for the women’s movement. For several years she was the first woman to serve as a town councillor in Hudiksvall following the introduction of the voting reforms. Further, Stina Rodenstam was behind the founding of a local branch of Fredrika-Bremer-Förbundet and she served as its first chair.

However, it was within the handicrafts movement that Stina Rodenstam made her main contributions as an ideologue and organiser. The ideas which inspired the setting up of handicrafts associations came from HV’s weaving school. She came into contact with the rich handicraft tradition of Hälsingland in part through her husband who ran Hälsingland prehistory association meetings in addition to his teaching duties. In 1906 Stina Rodenstam organised a handicrafts exhibition to highlight Sweden’s textile treasures.

Stina Rodenstam had extensive connections with a number of museums. At her studio embroidered and woven copies were produced of the medieval tapestry which Frans Rodenstam and Erik Salvén had discovered in Skog church when compiling an inventory ahead of an exhibition at Hudiksvall in 1913. Stina Rodenstam produced handspun and naturally dyed wool for Kungliga Husgerådskammaren for several years during the 1920s. These were used in the conservation efforts on national tapestries dating from the 1500s and the 1600s. Correspondence reveals that ahead of exhibitions and publications Stina Rodenstam often supplied both the textile researcher Agnes Branting and the female staff at Nordiska Muséet with information on textiles and national costume traditions in Hälsingland.

A major element of Stina Rodenstam’s work comprised week-long lecture tours throughout Sweden and she was known for being a diligent and much loved public speaker. During her final working years, 1925–1934, she gave well over 200 lectures in almost as many different locations. Her published works reveal her extensive expertise in her chosen fields. Several of her lectures were printed, some as essays in annuals and the like, and some as notes in newspapers or pamphlets of various types. Her biggest work is the comprehensive report entitled Hemslöjden, published in 1915, in which she knowledgably portrayed the various handicrafts associations’ exhibitions region by region. Baroness Henriette Coyet commissioned this work for the 1914 Baltic Exhibition in Malmö.

In 1934 Stina Rodenstam was the first recipient of the Svenska Hemslöjdsföreningarnas Riksförbunds silver plaque inscribed with the eighteenth-century motto: “Till heder för den qvinna som fint och snällt kan spinna” (in honour of the woman who can spin finely and diligently).

Stina Rodenstam’s health declined rapidly following a car accident in Jämtland in 1934. She died in 1936 at Hudiksvall hospital. She lies in Sofiedal cemetery in that town. 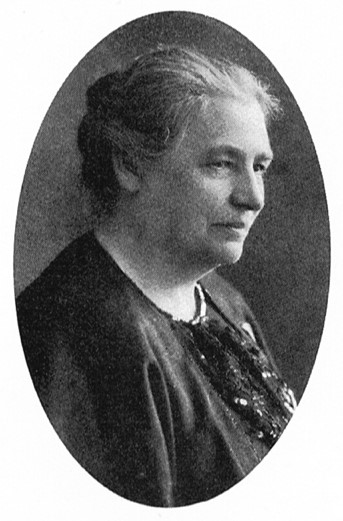