Laura Stridsberg was a librarian at Nordiska Museet. One of her more important contributions was the collecting of Artur Hazelius’ letters and papers from the three final decades of his life. He was the founder of Skansen and Nordiska Museet.

Laura Stridsberg was born in Stockholm in 1884. Her parents were Maria Stridsberg, formerly a teacher at the Andersinska School, a private secondary school for girls in Gothenburg, and Olof Arvid Stridsberg, a grammar school teacher. Laura Stridsberg had three brothers: Gustaf born in 1877, Olof Axel born in 1879, and her twin brother Lennart. The family lived in the Gamla Klara school house but moved in 1888 to Vasastaden in Stockholm. Both parents were well versed in literature and good writers themselves. In the evenings, their mother used to sing verses from Carl Michael Bellman’s nature poetry, which influenced young Laura Stridsberg and inspired her with a strong feeling for nature. Even when very young, she had access to her father’s library and thereby unimpeded access to all kinds of literature. She read fluently at the age of five and was entered directly into class 2 at Anna Sandström’s school in 1893. After completing her schooling, she spent two years as an external pupil at the recently opened Anna Sandström’s teacher training college.

In the winter of 1904, Laura Stridsberg was called by the Skansen director at that time, Gunnar Hazelius, to a probationary work period at Skansen. After a short probationary period, she started working as a special secretary there when she was 19 years old. She was also responsible for the young country girls who had travelled to work there. After a few months, her duties were expanded to include Nordiska Museet. Her work included viewings of Skansen’s section for cultural history and the museum’s collections, and working in the library’s reception among other things. For more than 20 years, Laura Stridsberg shared her time between Skansen’s programme activities and duties in Nordiska Museet’s library, and from 1926 she was employed full time at the library.

Her duties there included comprehensive involvement in the museum’s collection of manuscripts, where apart from her work with Artur Hazelius’ papers, she contributed among other things to the development of the Arkivet för svensk folkkännedom. She was strongly inspired by the manuscripts and wrote several articles about Artur Hazelius, Skansen and the museum’s history. Her work at the library and meetings with people have been warmly and humorously described by her in speeches and writings. Laura Stridsberg was a popular lecturer in and beyond the library world. After more than 40 years as a much acclaimed colleague at Skansen and Nordiska Museet, Laura Stridsberg retired in 1947. For 14 years after that, she served as a fill-in employee at the library during holidays. Laura Stridsberg was awarded the service medal Litteris et Artibus in 1944 for her cultural contributions.

Laura Stridsberg’s community engagement was great and she was a member in a number of associations and organisations, among others the Fredrika-Bremer-Förbundet, Internationella Kvinnoförbundet för Fred och Frihet (IKFF), Kyrkans Vänner, Högerpartiets kvinnoförening and Sällskapet Nya Idun. During the second world war, Laura Stridsberg and her brother Gustaf Stridsberg were engaged in the anti-Nazi group Tisdagsklubben, founded by the author Amelie Posse in 1940. The club was active until 1945 but was resurrected in 1960 under the name Nya Tisdagsklubben. Laura Stridsberg was elected club secretary. During the second world war, she also supported Radikala landsföreningen.

Apart from her community interests, she had a great cultural interest. Laura Stridsberg was among other things very interested in folk dancing and was engaged all her adult life in the folk music association Folkvisedans Laget in Stockholm, founded in 1905. She became a board member in 1909 and was chairperson for 10 years. Laura Stridsberg documented the association’s repertoire and wrote several articles and small pamphlets on the subject.

Laura Stridsberg was also profoundly moved by the author Karin Ek’s life and poetry. Her interest resulted among other things in a lecture for the Fredrika-Bremer-Förbundet in 1934 as well as an article in Studiekamraten in 1941.

Laura Stridsberg’s archive bears witness to her social engagement and also to her great human compassion. Her social contact net was very extensive and her friendships many. Laura Stridsberg’s correspondence is also extensive with contacts lasting for many decades. Among these were Rut Gavelin and Emilia Fogelklou.

Laura Stridsberg lived in the family apartment in Vasastaden in Stockholm for 80 years. According to a radio interview from 1974, she was busy organising her own and the family’s papers. She talked then about her latest project, a collection of quotations on the themes nature, culture, music and friendship. Unfortunately, she never had time to complete this work.

Laura Stridsberg died in 1976. She lies buried in Norra begravningsplatsen (the Northern Cemetery) in Solna. 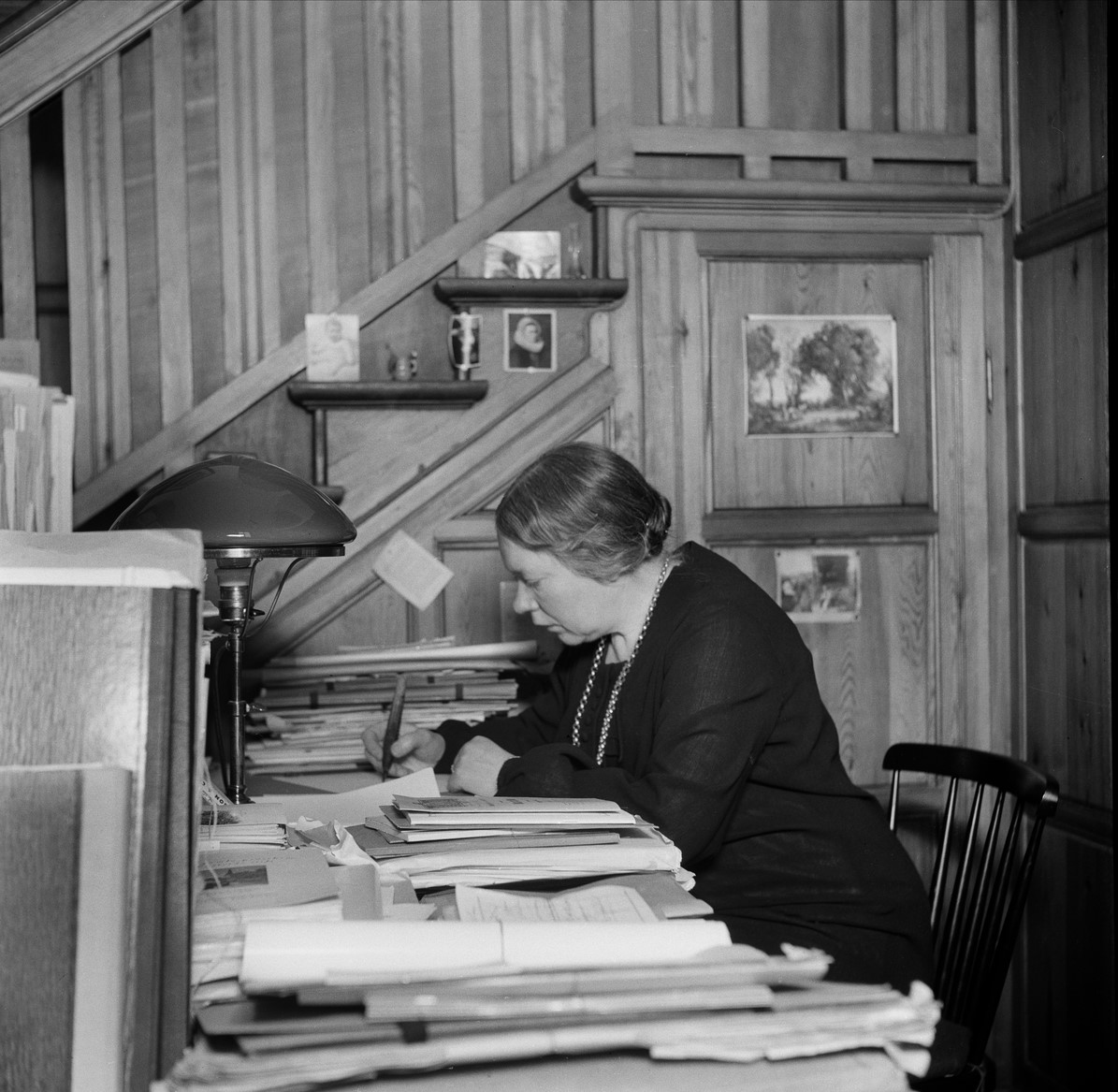