Lotte Laserstein was a German-Swedish artist whose artwork intermittently fell into obscurity and then on rediscovery has been highlighted as a precious and significant example of 1900s art.

Lotte Laserstein was born in the town of Preussisch Holland in the German province of East Prussia (now Pasłęk in Poland) in 1898. She was the first child born to Meta and Hugo Laserstein and her father was of Jewish heritage. Two years later her sister, Käte Laserstein, was born. Her father was a pharmacist and owned a local pharmacy. Due to her father’s failing health, in 1900 Lotte Laserstein and her family moved to Bad Nauheim in the German province of Hesse. Two years later, in 1902, her father died due to heart disease, aged only 42. Her mother never remarried and from that time onwards the family comprised solely self-sufficient women. They moved to Danzig (now Gdansk) where Meta Laserstein’s mother, Ida Birnbaum, was living together with her daughter Elisabeth. Lotte Laserstein’s childhood could be characterised as respectable middle-class in nature, one which afforded ample space to musical, literary and artistic interests. Meta Laserstein was a professional pianist who also gave piano lessons. Elisabeth Birnbaum ran a small painting school for women located in Danzig and her niece, Lotte Laserstein, attended the school from the age of 10.

In 1912 Meta Laserstein and her mother and her two daughters all moved to Berlin. There the girls attended certified schools and furthered their education. After completing her schooling Lotte Laserstein then attended university for a couple of terms, studying philosophy and history of art. She subsequently took preparatory painting classes and in 1921 she was accepted into the Berlin academy of art, which had opened its doors to female students in 1919. The teaching offered by the artist and educator Erich Wolfsfeld was formative for his students. Lotte Laserstein had long admired his artistic realism and he became very important to her artistic development. She showed major talent for which she gained recognition whilst still a student. Five years later she qualified with top marks and won a gold medal.

Lotte Laserstein had received a classical education and her work often contains references to themes related to art history. During her artistically expansive phase, which lasted from the 1920s through the 1930s – and is often described as her most successful – her choice of subject matter for her artwork also reflected contemporary popular culture. She was further influenced by the liberating women’s fashion of the day which entailed loose-fitting clothing, cutting your hair short, dressing and behaving in an androgynous manner. Lotte Laserstein portrayed women who practised sports and who sat alone at public cafés. These were emancipated women who freely imbibed alcohol, read a newspaper, and moved around free from the presence of male companions.

On completing her art studies Lotte Laserstein set up her own studio, working both on commission and freely creating her own paintings. She held exhibitions in places such as Berlin, Paris, and Stuttgart. She was considered to have a promising career ahead of her and was noted in the press as one of the best young artists amongst her contemporaries. However, working as a freelance artist did not bring in enough income to live on and so Lotte Laserstein opened a private art school. She also looked for illustration work and sent in contributions to popular culture magazines.

One of her closest friends was Traute Rose who posed for many of Lotte Laserstein’s paintings and can be seen in the double portraits that Lotte Laserstein produced. These paintings revealed the artist’s interest in her role as artist and in the relationship between model, artist, and viewer. Meanwhile, the references to art history were ever-present. Lotte Laserstein also began to produce self-portraits, something she continued to do throughout her life.

In the early 1930s Lotte Laserstein produced a couple of large-scale paintings comprising groups of people. One of the best-known of these is Abend über Potsdam (known in Swedish as Kväll över Potsdam) which dates from 1930. It depicts five people sitting on a balcony with a view across the town. None of the figures is engaged in conversation and all five are deep in personal contemplation. The painting represents the moody and foreboding atmosphere which reigned at that time.

It was not long before the political climate began to change, initially piecemeal and then radically. Following the Nazi rise to power in 1933 Lotte Laserstein, due to her Jewish ancestry, was forced out of public life. She attempted to hold exhibitions in other European countries and successfully managed to display individual pieces of her artwork in London in 1934 and in Paris in 1937. However, the situation became increasingly tense. In 1935 she was forced to close her school as, amongst other things, she was no longer permitted to acquire artistic materials.

Lotte Laserstein received an invitation to hold an exhibition at Galleri Modern in Stockholm and she realised this was an opportunity to leave Germany. She left Berlin in 1937 and also managed to ship the majority of her artwork to Stockholm. She held her exhibition in the Swedish capital and was given a three-month visa to stay in the country. She made new friends in Stockholm, some of whom helped her to enter into a marriage of convenience and thereby gain Swedish citizenship. As the situation in Berlin worsened Lotte Laserstein tried to find a way to bring her sister and her mother to Sweden, but the Aliens Appeals Board rejected every application she submitted. Her sister successfully hid and survived the difficult conditions of wartime Berlin. Her mother, however, was deported to Ravensbrück concentration camp where she was murdered in 1943, aged 73.

Lotte Laserstein then attempted to create a new life for herself in Stockholm, earning a living by producing portraits on commission. She found it hard to break into new artistic circles, however, as they were focusing on modernism and abstract art, neither of which forms of artistic expression appealed to her. She applied to become a member of Konstnärernas riksorganisation (KRO, the Swedish trade union for artists) but was several times rejected which she took as a personal failure. She was not modern enough to be included.

In 1952 Lotte Laserstein was commissioned to produce a portrait of the then governor of Kalmar and his wife, Ruben and Helga Wagnsson. On completing the portrait she began to commute between Stockholm and Kalmar as she felt more at home in the smaller town of Kalmar and she began to develop a fondness for Öland. She purchased a summer hut on the island in the early 1950s and by 1957 she had become a permanent resident of Kalmar. She continued to paint portraits but also produced still lifes of flowers and landscapes. She exhibited new oil paintings, drawings, water colours, and pastel paintings in Kalmar. She had a painting studio and a residence on Norra Långgatan in Kalmar where she displayed her main works from her time in Berlin.

Lotte Laserstein was a productive artist and so the artistic quality of her work varied accordingly. This has led to a certain ambivalence as regards the artistic value of her art. She has become marginalised within art history studies, and following her exile from Germany she disappeared entirely from the German context. Further, she received minimal attention within her local area. Her actual public breakthrough and recognition did not come until later on in her life.

Towards the end of the 1970s and during the 1980s she began to receive local attention due to her earlier works and exhibitions were arranged in Kalmar to display these works as well as those she had produced since arriving in Sweden. Her international breakthrough occurred in 1987 when Caroline Stroude, a gallery owner from London, visited Kalmar to interview her about her memories of Erich Wolfsfeld and to ask if she could borrow two of his works that were in Lotte Laserstein’s possession. On Caroline Stroude’s arrival at the apartment in Kalmar her eyes were opened to the fact that Lotte Laserstein’s paintings represented true artistry. Exhibitions of Lotte Laserstein’s work were held at Thos. Agnew & Sons and at the Belgrave Gallery in 1987 and in 1990. Private individuals as well as museums in both Great Britain and in the USA purchased her paintings. Despite her advanced age, she was present at both openings.

Lotte Laserstein died in Kalmar in 1993. She is buried at Räpplinge cemetery on Öland. 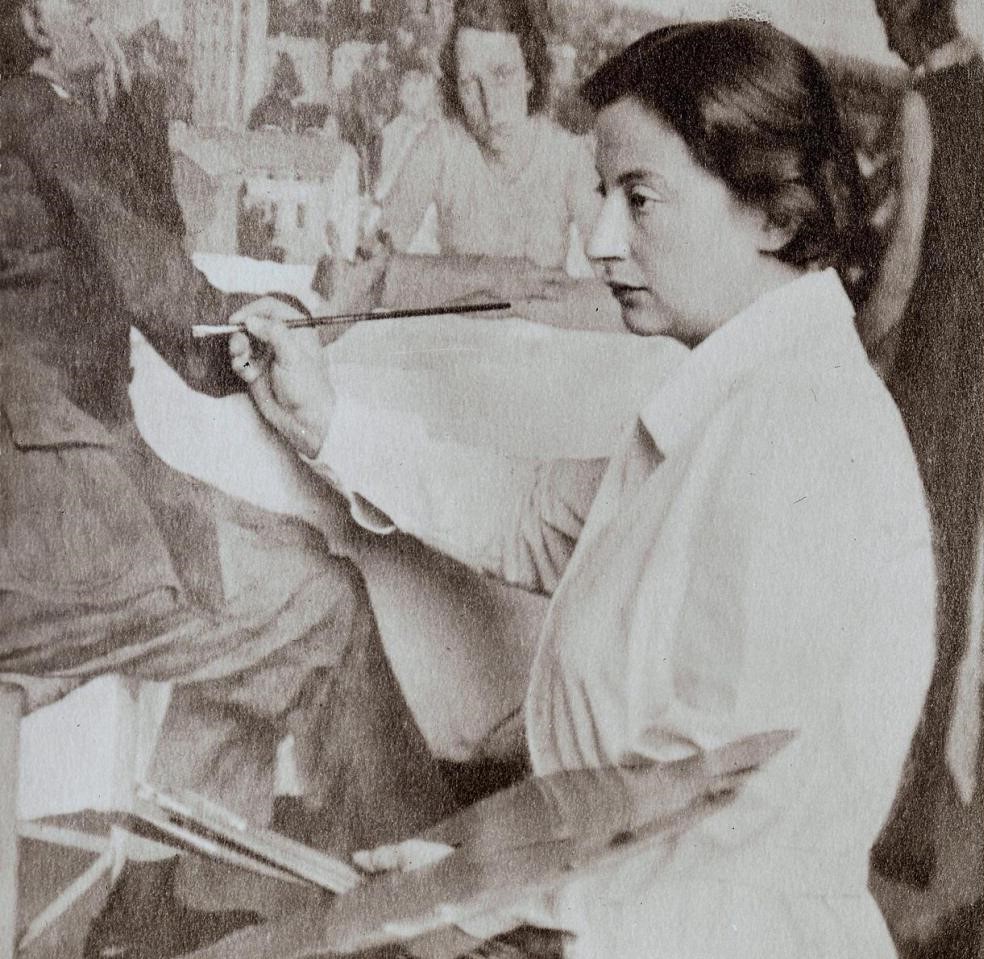