Louise Hagberg was a folklore researcher. Her monumental work from 1937 entitled När döden gästar remains the standard work on ancient Swedish views and customs in relation to death and burial.

Louise Hagberg was born in Uppsala in 1868. She was the daughter of Baroness Louise Jakobina von Schwerin and Jakob Theodor Hagberg, a professor of new European linguistics and modern literature. Several of Louise Hagberg’s siblings followed in their father’s footsteps. Both Augusta Hagberg and Karl August Hagberg became writers and translators. In 1891 Louise Hagberg and her sister Lotten became involved with the Nordiska museum. Louise Hagberg served at the museum for 40 years. Just like Nils Edvard Hammarstedt, who was her colleague and scientific mentor, her main interest lay foremost in folklore which, according to that era was defined as ‘the spiritual culture of the countryside’.

Louise Hagberg travelled across the Swedish countryside during the 1910s and 1920s recording and interviewing elderly women and men. During her period working at the museum she undertook no less than 38 field trips in 17 provinces. She was also a productive researcher. She published a total of 50 essays in both Swedish and foreign journals. She also wrote articles for the daily press, such as Aftonbladet, Husmodern, and Idun. Her scientific articles mainly concern folklore beliefs and rituals connected with annual holidays and significant rites of passage. The former is typified by her articles ‘Några anteckningar om ’smöjning’ from 1921, ‘Vasst emot’ from 1928, and ‘Läkedomskonst’ from 1937, whilst the latter is represented in articles including ‘Matsmässa i Gagnef’ from 1913, ‘Käpp och krycka och kryckeståt’ from 1915, ‘Brudstrumpeband’ from 1921, and ‘Den nyfödde världsmedborgaren’, from 1934. Several of these articles were published in the Nordiska museum’s own journal, Fataburen.

Louise Hagberg released her first book, Påskhögtiden, in 1920. In it she provides an overview of how Easter has been celebrated in Sweden across the centuries, including descriptions of games involving eggs and dress-up parades, as well as traditional meals and church customs. Further she eruditely summarises Swedish views on witchcraft, witches, and the witches’ ride to Blåkulla. What makes the book most remarkable today, however, is its presentation. The book is printed by Handpresstryckeriet in Råsunda; it is small (15x12cm, 134pp) but lavishly illustrated, including some colour images, as well as some done by the artist Arthur Sahlén. There are several editions of the book, including a limited edition made from handmade paper and bound in white parchment. Louise Hagberg appears to have been a keen bibliophile.

Louise Hagberg released her second book when she was a pensioner. Her 1937 book När döden gästar used both oral and written sources, and describes views and customs related to death and burial. Mainly rural society funerals are described in detail, from the moment of death until the funeral festivities. Further, beliefs about the dead as ghosts are treated in depth in her chapters entitled ‘Gengångare, spoken och gastar’, ‘Gravar som öppnar sig’ and ‘Hur man sökt skydda sig mot genfärd’. Louise Hagberg’s book, which was favourably received, confirmed her position as one of the pre-eminent folklorists of the interwar period. The book was reprinted in a new edition in 2015.

Louise Hagberg was given several awards for her research. These included the Litteris et Artibus medal in 1930, becoming elected as a corresponding member of the Gustav Adolf Academy in 1939, and becoming an honorary doctor of Uppsala university in 1942.

As a researcher and collector Louise Hagberg sought to investigate beliefs and customs of former times and preserve them in the archives. She simultaneously sought to improve the times she lived in, as shown by her membership of the Fredrika Bremer Förbund (association) and her role as a board member of Stockholms Föreningen för Kvinnans Politiska Rösträtt (FKPR) (Stockholm association for women’s suffrage).

Louise Hagberg died in 1944 and is buried in the Hagberg family grave at the Norra cemetery in Solna. 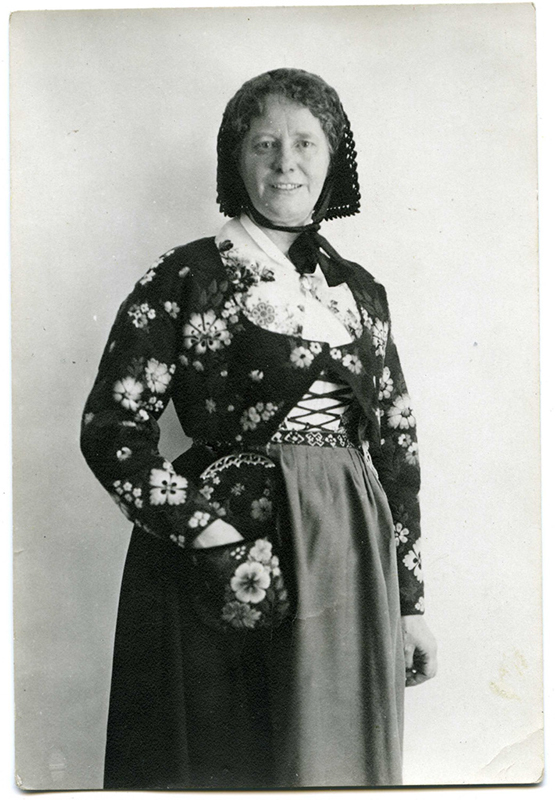