Maj Sjöwall and her partner Per Wahlöö jointly authored ten detective novels under the series title Roman om ett brott, published between 1965 and 1975. These books completely altered the genre of Swedish detective novels.

Maj Sjöwall was born in Stockholm in 1935. She was the daughter of Will Sjöwall, managing director of Hotell Gillet on Brunkebergstorg in Stockholm, and his wife Margit Trobäck. As a child Maj Sjöwall used to go sledging on Hamngatsbacken (which at that time was steep) and she played all over the Klara area of the city. After completing her education at a girls’ school she began to work for various publishers, starting with Åhlén & Åkerlund from 1954–1959, then at Wahlström & Widstrand from 1959–1961, and subsequently at Esselte from 1961–1963. Maj Sjöwall married Gunnar Isaksson, an editor, and they had a daughter during their time together from 1955–1958.

Maj Sjöwall met Per Wahlöö, an established author, in 1962 and just one year later they moved in together and began writing books together, at his suggestion. “We were looking for a genre which would give us a wide readership”, as Maj Sjöwall has recounted, and they settled on detective novels. On the death of Maj Sjöwall in April 2020 the publisher Ann-Marie Skarp described the couple’s written work: “They portrayed the sixties, that great decade of political events, and strayed into the seventies, and they were skilled at generating an exciting frame around these periods within which they included political messages”.

The detective series called Roman om ett brott (translated as The Story of a Crime) began with Roseanna, released in 1965. Up till that point these types of novels had remained fairly true to the likes of Sir Arthur Conan Doyle, Agatha Christie, Dorothy Sayers, Raymond Chandler and Dashiell Hammett. The detectives in British crime thrillers tended to be brilliant individuals who dealt with murders that were usually not very bloody affairs but instead intellectual mysteries which often unfolded within well-polished milieus, whilst the more hardboiled American variants tended to depict whisky-drinking private detectives who met lightly-clad women and unscrupulous shadowy types in downbeat city-centre milieus.

Roseanna was something entirely new. The lead character is chief detective Martin Beck who has worked for the police for half his life and lives in an apartment in the Stockholm suburb of Bagarmossen. He has a boring wife and two children, travells to work on the subway, and spends his free time in the evenings constructing model ships (just as Per Wahlöö did in real life). Martin Beck is a capable individual who leads an ordinary Swedish everyday life, and this aspect of the characterisation continues, many years later, to be adopted by subsequent thriller-writers who award a lot of attention to the personal life of the detective portrayed in their own work.

The police work depicted in Roseanna is just as realistic, portraying the slow and careful assembly of evidence and long gaps arising in enquiries whilst awaiting answers from the other side of the Atlantic Ocean. The murder victim, Roseanna McGraw, was an American citizen. Martin Beck has a poor command of the English language and fumbles his way through exchanges with the American police in an unhelpful manner, resulting in the Americans’ confusion to the extent that they believe that Martin Beck shot the murderer to death. This causes Martin Beck’s colleagues no end of amusement given that guns were not normally provided to the Swedish police force.

Maj Sjöwall and Per Wahlöö not only focused on realism but they also significantly raised the literary level of the detective novel genre. Their style was concise and restrained, resembling that of Raymond Chandler but with the addition of a fairly constant dry undertone of humour. Martin Beck works with a group of fellow officers, just as depicted in the American writer Ed McBain’s thrillers based in the 87th precinct in the fictitious city of Isola, but his colleagues are undeniably Swedish men. These include Martin Beck’s best friend Lennart Kollberg, a lover of life who eventually resigns from his police job due to political reasons. There is also the slightly misplaced upper-class Gunvald Larsson who became a favourite with the public through the film and TV adaptations of the stories. Martin Beck’s closest colleague is Einar Rönn, whose middle name is unbelievably Valentino. Fredrik Melander, meanwhile, is “the living index card catalogue”, who never forgets anyhting (which meant that time-wasting trips to the archives are avoided and the narrative retains its pace).

Maj Sjöwall and Per Wahlöö were subject to – and remain so to this day – accusations of often displaying an overt political agenda in their books. However, the early books in the series were actually more obsessed with describing Sweden and primarily what Sweden was like during the sixties. The rundown suburb areas and wild youth are portrayed, along with minor criminals, shabby stairwells, and forgotten backstreets. As time went on the authors increasingly criticised Social Democracy and in their final work, Terroristerna released in 1975, they had a young female character shoot the prime minister to death in a manner that was uncomfortably similar to the events surrounding the murder of Prime Minister Olof Palme.

The Roman om ett brott series became well-known far beyond Sweden and the books were translated into twenty-five languages (including Esperanto). In 1971 Maj Sjöwall and Per Wahlöö received what – at that time – was one of the world’s rare detective novel prizes, namely the Edgar prize, for Den skrattande polisen. The couple remain the only Swedes to ever have been awarded an Edgar.

The first film adaptation of one of their books dates from 1967, when Keve Hjelm played the role of Martin Beck in Roseanna. The best-known film version is Mannen på taket, from 1976, which is based on Den vedervärdige mannen från Säffle, published in 1971, and this time Carl-Gustaf Lindstedt played the part of Martin Beck. An American film adaptation called The Laughing Policeman was released in 1973, starring Walter Matthau as Martin Beck, and it was based on Den skrattande polisen from 1968. Since these three films a significant number of films and TV-series have been produced based on the characters rather than the published books and they have been placed into specially-written scenarios.

Maj Sjöwall and Per Wahlöö were the “perfect writing couple”, as Maj Sjöwall herself said in an interview in the Dagens Nyheter newspaper in 1993. At that time the book Mannen på balkongen was being serialised in the paper. The couple’s handwritten manuscripts have been preserved and one can see how the handwriting style sometimes changes in the middle of a sentence. The couple genuinely wrote together and if one of them needed to step away to deal with one of their two sons or attend to some other matter they would hand over to the other. They were extremely meticulous in their work and sometimes jumped onto their bikes in the middle of the night in order to check that they had the correct address. Indeed, they often wrote at night whilst their sons were asleep.

Maj Sjöwall and Per Wahlöö also translated a large number of books together, including ten of Ed McBain’s books.

The couple lived together until Per Wahlöö’s death in 1975, following a period of illness. In the chapter entitled “Slagen” (beaten) of Johan Erlandsson’s Boken om Beck och Sjöwall Wahlöö och tiden som for, 2020, Maj Sjöwall reveals how she was repeatedly abused by Per Wahlöö, and often had to cover up black eyes with makeup or sunglasses. According to both her and their children, there was no shortage of booze, in addition to the uppers consumed by the couple in order to keep writing by night.

Maj Sjöwall carried on working after Per Wahlöö’s death, primarily as a translator, although she also wrote short stories and articles. She only wrote one further novel, a thriller which she authored in conjunction with the German author Tomas Ross, entitled Kvinnan som liknade Greta Garbo, published in 1990. She described herself as “rather lazy” and preferred to go out for wanders and people-watching rather than to work. Although writing romantic intrigues with Per Wahlöö may have been fun she found it dull on her own.

Following Per Wahlöö’s death Maj Sjöwall and her sons moved to Malmö. Once her children had grown up Maj Sjöwall spent a period of time living in Copenhagen, before finally returning to Stockholm.

When Swedish detective novels became really trendy following the release of Stieg Larsson’s Män som hatar kvinnor in 2005 this gave Maj Sjöwall’s and Per Wahlöö’s series a new lease of life, particularly given that they were clearly forerunners of the modern trend. Maj Sjöwall was invited to attend detective novel festivales and bookfairs throughout the world and very much enjoyed the attention.

In 2015 Maj Sjöwall moved to Ven where her daughter lived and she spent her time driving around the island in a small electric golf cart. Towards the end of her life she spent a brief period of time living in Landskrona. 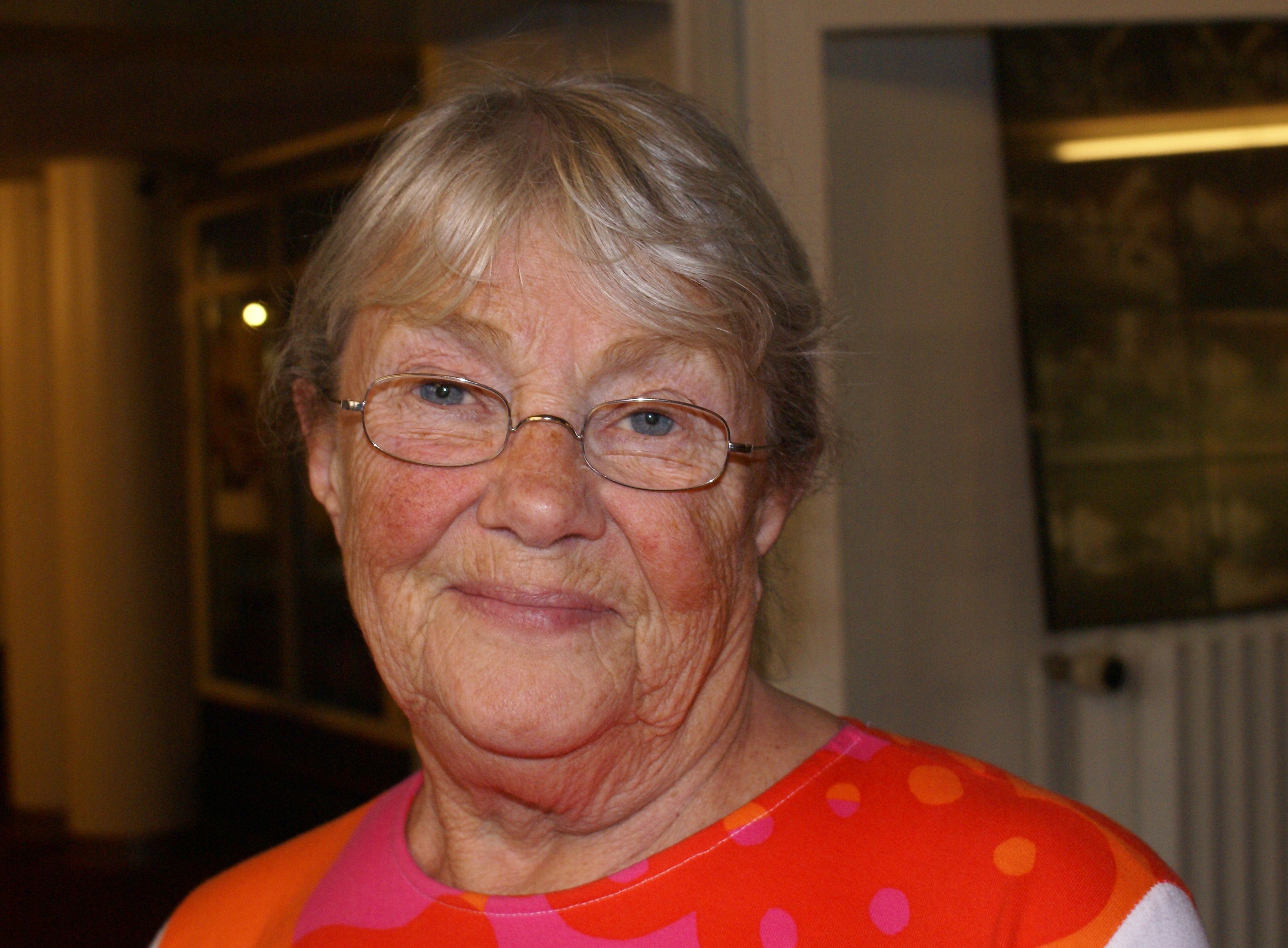