Maja Sandler was a teacher at a folk high school, a public educator, an activist and a philanthropist. She was one of the founders of Arbetarnas bildningsförbund (ABF, the workers’ education federation) in 1912 and she took the initiative of setting up aid for Finnish ‘war children’ who were sent to Sweden during the Second World War.

Maja Sandler was born in Uppsala in 1877. She was the daughter of the theologian and linguist Otto Emil Lindberg. Her father was also a well-known public educator and co-founder of organisations, including Föreningen Verdandi and Uppsala workers’ institute. Maja Sandler thus gained early exposure to the public education enterprise and this left a marked influence on her. Maja Sandler completed junior school and then began attending a girls’ school in Uppsala. However in 1891 the family moved to Gothenburg as her father had been appointed professor of Semitic languages at the university there. Maja Sandler completed her girls’ school education in Gothenburg. From the age of 16 she had been involved in organising meetings for the so-called “ruffians” of Gothenburg’s Majorna area, run by Amanda Leffler, an author who took an active interest in education. This served as an important experience for Maja Sandler’s later activities as a public educator. When she was 18 years old she decided to concede to her father’s wishes and she became a folk high school teacher who specialised in history, hygiene and physical education.

In 1901 Maja Sandler went to Scotland for a year in the capacity of companion for a particular family. She also attended lectures at the University of Edinburgh. When her host family moved to Cambridge she decided to stay on for another year with them in Great Britain and thus attended lectures at the University of Cambridge. After that she attended winter-term courses offered at the well-known Askov college in Jutland, Denmark, for a two-year period. This solidified her preparations for her future career as a folk high school teacher.

Her first employment as a folk high school teacher was at Billströmska folkhögskolan at Tjörn. There, during the 1905 and 1906 summer terms, Maja Sandler taught physical education, hygiene and healthcare. She then spent a couple of years working the winter terms at Hola folkhögskola, north of Kramfors in Västernorrland where she also met the man she went on to marry, Rikard Sandler. He was the son of the school’s principal and he also taught at the school and was a politically active member of the workers’ movement.

After they married in 1909 Maja Sandler and her husband moved to Brunnsviks folkhögskola where they had both gained employment. She remained in post as a teacher until the first of her three sons was born in 1912. That same year Rickard Sandler, Yngve Hugo, and Maja Sandler set up the ABF educational organisation. Her husband served as the first chair and he and Hugo travelled around setting up study groups and training new group leaders. Maja Sandler was responsible for the organisation’s administration. They all worked for free, undertaking these activities during their spare time, in the evenings, and at the weekends. The office lay within the Sandler home and travelled with them when they moved. By this time Rickard Sandler had become a parliamentarian for the Social Democratic party and this entailed that the family spent lengthy periods of time living in Stockholm during the 1912–1917 period. Maja Sandler ran ABF’s offices until 1918 when the family finally left Brunnsvik for good and settled in Stockholm. Her husband became increasingly taken up by parliamentary and government work. The couple nevertheless continued their activism in ABF and during the ensuing years Maja Sandler gave a large number of lectures and courses within local ABF groups throughout the country. Maja Sandler herself has stated that she prepared over 1,500 proposals for study plans for use by local study groups. Her experience within the public education sphere led, in 1918, to her being appointed to serve on a government inquiry into school and county libraries, the findings of which were subsequently summarised in SOU 1924:7. This task entailed that she spent a lot of time travelling throughout Sweden and visiting many county libraries.

Maja Sandler came from a family with a politically liberal background but through her husband she was drawn into the Social Democratic circles. The first time she spoke on behalf of the Social Democratic party was during the 1921 election campaign when she assisted the women’s federation to solicit votes and she travelled throughout northern Sweden rousing the women there to make use of their newly-won voting rights. During the 1920s Maja Sandler also began to take on international and philanthropic work. Anna Lindhagen got her involved in the founding of the Swedish branch of Save the Children, and she remained active within the organisation until the late 1950s. She was also involved in Kommittén för de baltiska länderna (committee for the Baltic countries) and she campaigned for the rights of Latvian children to enjoy summer visits to Sweden and fundraised for the benefit of the Gammalsvenskby population in 1929 when Stalin gave them permission to leave the Soviet Union. Towards the end of 1936 Maja Sandler, along with Birgit Hedström, Anna Lenah Elgström and Ellen Hagen, set up Svenska kvinnokommittén för Spaniens barn (Swedish women’s committee for the children of Spain) in support of victims of the Spanish Civil War.

During most of the 1930s Maja Sandler’s husband served as Sweden’s foreign minister. This sometimes meant that the family lived in the so-called ‘utrikeshotellet’, where Maja Sandler organised an extensive series of various fundraising social events, including concerts, soirées, Bridge-nights amongst other things. One of the concerns raised was the situation of Swedes abroad in various corners of the world. Through her involvement in Sverige-Amerikastiftelsen (Sweden-America foundation) Maja Sandler also established connections with the Swedish settlements in USA and several of her events concerned the preparations to commemorate the historical New Sweden colony in Delaware. At the time of the jubilee in 1938 Maja Sandler undertook a lengthy visit to the USA.

Upon the outbreak of the Finnish Winter War in the autumn of 1939 Maja Sandler, along with Hanna Rydh and the support of her husband, still Sweden’s foreign minister, set up a campaign called “Finlands sak är vår!” (Finland’s cause is ours!). The intention was that Swedish families would willingly accept Finnish children into their homes to protect them from the war. In December 1939 Centrala Finlandshjälpen was established and in just a few weeks it expanded into a national humanitarian aid movement. Maja Sandler, her husband, and Hanna Rydh undertook several trips to Finland at the end of 1939 and in early 1940 to organise aid work for Finnish children during the Russian bombing raids. The children crossed the border at Haparanda by train and were then fostered out to families throughout Sweden and in Norway. Rickard Sandler’s determination to also campaign for increased military support to Finland made his government role untenable and so he resigned as foreign minister in December 1939. In 1941 he was appointed governor of Gävleborg county. Maja Sandler, now based at Gävle castle which was the governor’s seat, continued her activism on behalf of Finnish children and their transportation to Sweden continued throughout the Second World War. In 1944 in Gävleborg alone there were more than 3,400 Finnish children and the Sandlers themselves took in a Finnish boy.

Following the German occupation of Norway in April 1940 great concern arose for the Finnish children who had been sent there. Maja Sandler and the Finnish librarian Elsa Bruun travelled to Norway in an attempt to remove the children from Norway. Assisted by activists from the Svenska Norgehjälpen aid organisation they travelled around Norway finding the displaced Finnish children and then smuggled them across the border to Sweden. The Norwegian resistance movement also provided help along with certain diplomatic contacts dating from the time when Maja Sandler’s husband had been Swedish foreign minister. It was a highly risky operation. Many of the Norwegian foster families had fled the cities and were living in remote cottages and farms and it was necessary to travel at night on lonely roads and sometimes walk great distances in order to find the Finnish children. Maja Sandler also organised fundraising activities on behalf of the children of northern Norway and Finnmark in 1941. In 1947 the Norwegian king awarded Maja Sandler the Haakon VII freedom cross in recognition of her contributions to the Norwegian cause during the Second World War.

Throughout the 1930s and 1940s Maja Sandler also continued her public education activities. From time to time she would head out into the countryside to give talks and hold courses through study associations and voluntary organisations. Often these dealt with children’s, women’s, and family issues as well as her experiences from her many travels completed in various contexts. She also ran practical courses in hygiene and health care methods. During her time in Gävle she increased her public education activities given her expanded local contacts with various women’s organisations. She also set up the handicrafts association Gästriklands hemslöjdsförening and the government appointed her as a member of Gästriklands läns mödravårdsnämnd.

When her husband’s time as governor of Gävle came to an end in 1950 Maja and Rickard Sandler moved back to Stockholm and during the ensuing decade their lives were heavily marked by Rickard Sandler’s UN role. Maja Sandler went on a lot of trips to the USA and spent lengthy periods of time visiting her son Åke in California. She also began to write her memoires. The first part of these, entitled Idyll och uppbrottstid, was published in 1961 and it was serialised on Sveriges Radio using her voice. Towards the end of the 1950s she began to focus on another activity. Her maternal grandmother had given her a recipe for facecream when she was younger and in 1958 she sold the rights to this recipe in the USA. For a number of years this product was sold as Grand Mère’s Crème. Maja Sandler attended the product launch in Stockholm. After her husband died in 1964 she continued writing her memoires with the intention of publishing another two parts. The second part, Från Lillgården till Arvfurstens palats, was posthumously published in 1971. The third, and final, part covering the 1940s–1960s was never released.

Maja Sandler was described by her contemporaries as modest and lovable, a highly energetic person with a positive view of life. Throughout her adult life she sought to capitalise on the possibilities and contacts her husband’s various political roles made accessible to her and to campaign for the issues closest to her heart, related to international humanitarian efforts and focused on the plight of children, the women’s movement, and Sweden’s role in the world. Public education and practical public information services also remained lifelong central interests to her. 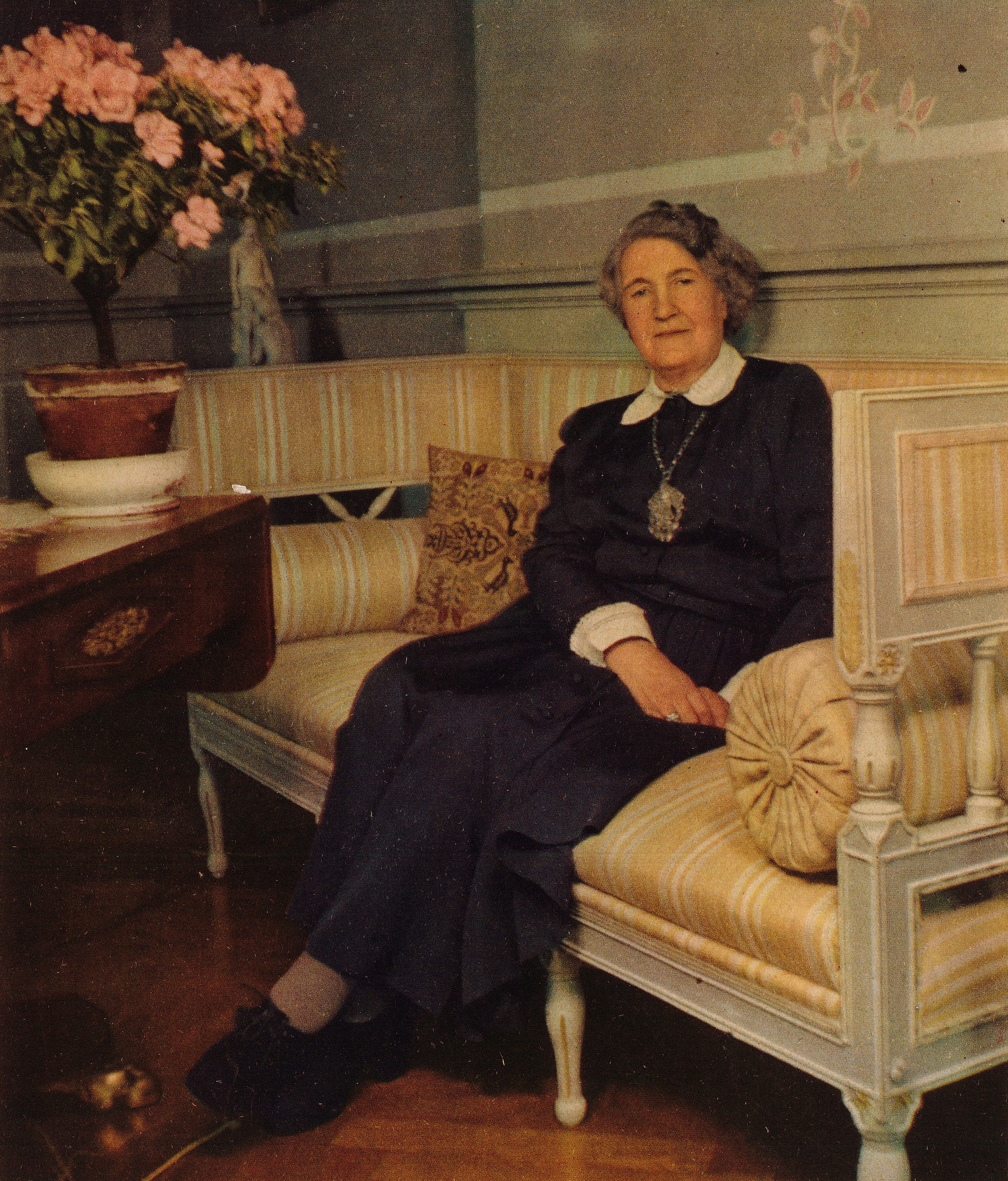