Maria Andrén was a wood-working instructor who was active in Sweden and in England around the turn of the twentieth century.

Maria Andrén was born in Tollered, Skallsjö congregation. This was a small industrial place in Lerum municipality, Västergötland where her parents owned a farm and ran a sawmill. In addition her father, Sven Andreasson, was a parliamentarian. In addition to Maria Andrén the family included her twin brother and a younger sister.

During the summer of 1887 Maria Andrén, then 25 years old, attended a wood-working course at Nääs Slöjdlärarseminarium (handicrafts teachers’ programme) which was situated just a few kilometres distance from her childhood home. On seven separate occasions leading up to 1890 Maria Andrén taught courses on that same programme herself after completing her own training. In fact she was one of the women who taught the most wood-working courses at Nääs.

Otto Salomon, who ran the programme and whose method of teaching handicrafts was internationally renowned, put Maria Andrén in contact with other people. Through his personal connections Maria Andrén was able to travel to England in 1890. She then spent a couple of years in Scarborough teaching wood-working. She also worked at various schools in Manchester and Liverpool, whilst her longest-lasting job was as a wood-working instructor in Bradford. She was very well-liked in England. Hans Thorbjörnsson, who has studied Nääs Slöjdlärarseminarium, notes that Maria Andrén was one of Otto Salomon’s students who enjoyed great success abroad.

It is said that Maria Andrén sometimes wore traditional dress while teaching – this was a custom she had picked up at Nääs. Otto Salomon had encouraged and urged his students and instructors to do this, both in everyday situations and for special celebrations. A former student from Bradford remembers that Maria Andrén was a tall, good-natured woman. She is also described as patient and sympathetic.

After spending 36 years in England Maria Andrén returned to Sweden. She settled in Gothenburg in 1926. She died in that city in 1957. 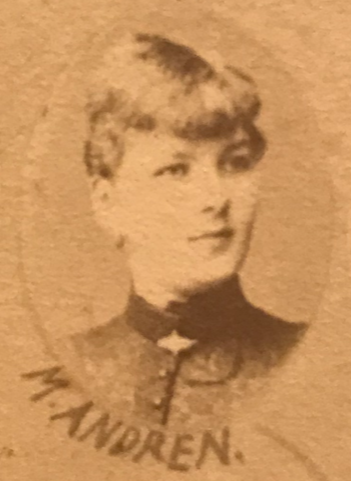