Maria Christina Kiellström, according to Bellman researchers the real Ulla Winblad, has gone down in history as this fictional figure in the national poet Carl Michael Bellman’s songs and poems.

In Bellman’s song collections Fredmans epistlar and Fredmans sånger and in Bacchi Orden, Ulla Winblad is depicted as a “nymph and priestess in the Temple of Bacchus”. Sometime between March and May in the spring of 1770, she made her entrance into Fredman’s epistle world in the title of Epistle no 3: “To one and all of the Sisters, but confessedly to Ulla Winblad”. It was only about twenty years later, in the 1790s, that the texts were published. However, they had earlier been spread by word of mouth. The imaginary Ulla Winblad was allowed to be both whore and madonna, both sinner and goddess – not seldom within the framework of one and the same poem.

Like many of Bellman’s literary figures, Ulla Winblad also had a counterpart in real life. Her name was Maria Christina Kiellström. In the first edition of Fredmans epistlar from 1790, Bellman presented Ulla Winblad’s husband as the harbour customs man Norström, and thereby gave a key to finding the model for the poetic Ulla Winblad. When in 1879 the registrar Carl Juringius focused his attention on the Police diary for the year 1790, he found a note on “the stamp clerk Lindståhl’s wife, formerly Ulla Winblad” – and Maria Christina Kiellström’s fate in life was thereby revealed. Since this Bellman character’s true identity has been discovered, Bellman researchers and archive enthusiasts have found her in several historical sources.

Maria Christina Kiellström was born in Stockholm on 15 June 1744, the youngest child of three. To those close to her she was Maja Stina. Her mother was Maria Olofsdotter. Her father was a handyman in the artillery called Jöns Kiellström. He suffered from the falling sickness (epilepsy). He lost his job the same year as his daughter was born. At the age of five, Maria Christina Kiellström’s mother died of dysentery. Her estate showed that the family was destitute with debts. Jöns Kiellström married his servant girl Catharina Elisabeth Winblad. The family moved to Ladugårdslandet in Stockholm.

On 20 October 1765, Maria Christina Kiellström gave birth to a daughter. To the midwife Maria Hedman, she stated that the father was Colonel Wilhelm von Schildt. He had left Sweden for Russia, but had promised to return and marry her. Having sexual intercourse without marriage was punishable. Maria Christina Kiellström was reported and called to appear in court. She only turned up in court several years later. The baby girl had an emergency baptism and was given the name Maria by the midwife. Eight days later, she died.

In April 1767, Maria Christina Kiellström was arrested by police constable Ingel Edström for walking around dressed in silk – a red jacket, a conspicuous and expensive fashion garment. According to the opulence regulations of 1766, servant girls and “loose women” were forbidden to wear silk. The arrest led to trial. Maria Christina Kiellström was able to show a certificate from the shipowner Grafstedt, who imported silk, that attested to her washing silk at Norin’s factory. Grafstedt vouched for her, and the court decided that she should not suffer a shameful punishment or a fine but that she should be allowed to retain her red silk coat.

During the period 1766 until 1771, Maria Christina Kiellström seems to have used the name Ulla Winblad herself. There are several sources, among others a list of “Whores in Stockholm at the end of the 1760s”. On 10 April 1768, a ball was held at Stockholm Castle that turned out to be a scandal. The women invited belonged to “the city’s most familiar whores”. The event led to a trial and was followed by pamphlets with confessions and satire. According to one guest at the ball, Ulla Winblad was present there.

On 30 April 1771, Maria Christina Kiellström turned to the court to atone for her crime of having borne a child out of wedlock. The reason was that she wanted to marry. Her fiancé was Eric Nordström. He was a customs man at Stora sjötullen, where Bellman also worked. They had both grown up in the same vicinity. Nordström is also mentioned in Fredmans epistlar. At the end of 1771, the couple moved to Södermalm. Bellman lived in the same block.

On 12 March 1772, Maria Christina Kiellström and Eric Nordström were married. She changed her name to Nordström, which was unusual at that time. The same year, Nordström got a job as a customs man in Norrköping and the couple moved again. They were relatively well off. The time in Norrköping was however marked by violence and humiliation. Nordström drank, gambled and fought. He appeared many times in court for fighting, visiting prostitutes, drunkenness, bribery, knavery and gross assault.

On 9 September 1777, a court case between the Nordström couple started. The proceedings provide detailed insights into the household’s daily life. Nordström assaulted his wife with weapons and threatened her with a knife. In other court cases, it was shown that he was unfaithful. Maria Christina Nordström also appeared before the court. In some cases she was a witness, sometimes against her husband and sometimes against a woman with whom her husband had been unfaithful. On one occasion, a libellous text had been nailed up on a pillory in the harbour. In other cases, she herself was the accused. On 15 January1774, the city clerk Lars Jäderholm took both Nordström and his wife – “Ulla Winblad by name”, as it says in the proceedings – before the court for assault. The city physician witnessed to Jäderholm’s having brutal wounds, after he had offended Maria Christina Nordström by calling her Ulla Winblad. Bellman’s songs were well known even in Norrköping. The name Ulla Winblad was widely spread and linked to lechery and sin.

Eric Nordström died of typhus at 39 years of age. Maria Christina Nordström returned to Stockholm on 26 June 1783. Quite soon after her return, she found a new husband: Eric Johan Lindståhl who was an employee in the industrial court. When their engagement was announced, she was almost 42 years old. Her fiancé was 28 years old. The couple were married in the sacristy in Storkyrkan on 19 March 1786. The wedding reception is said to have taken place in the restaurant in the Södra city hall – nowadays Stadsmuseet – where Lindståhl had his place of work as a “stamp clerk”.

The couple seem to have been relatively well off. They moved around to various addresses in the city. They lived in Baggensgatan för a slightly longer period. Between 1788 and 1793, Maria Christina, now surnamed Lindståhl, was accused several times of illegally selling wine and spirits. She was accused of careless driving and for accommodating loose women. She broke windows, threw slops out into the street and ended up repeatedly in violent quarrels and fights with her neighbours. Her husband complained continually according to a neighbour over being “married to the same Ulla Winblad, who is so well known to the general public for lechery as well as notorious for the same in printed songs”. Courts often used her cognomen Ulla Winblad. During this period, Fredmans epistlar and Fredmans sånger came out in print, in 1790 and 1791 respectively. In the summer of 1795, the Lindståhl couple purchased a small farm in Södermalm. The deeds have been saved in Stadsmuseet in Stockholm, with Maria Christina Lindståhl’s signature. Three years later, on 20 January 1798, she died. The cause of death was obstruction, probably constipation. There was no money in the home, but luckily a necklace and four gold rings, pawned silver shoe buckles and some fake jewellery. Her clothes were worn but of expensive fabrics like silk and leather. She owned pictures with glass and frames, a bible and a hymnbook – but none of Bellman’s works. In the national newspaper Post och Inrikes Tidningar, her death was announced thus: “Caretaker Eric Lindståhl’s dear wife Maria Christina Kiellström, dead at the age of 54.” Obituaries were a new, lower-middle-class custom. She was buried in the second section of Maria Cemetery. The church bells of Maria Church tolled five times for her. 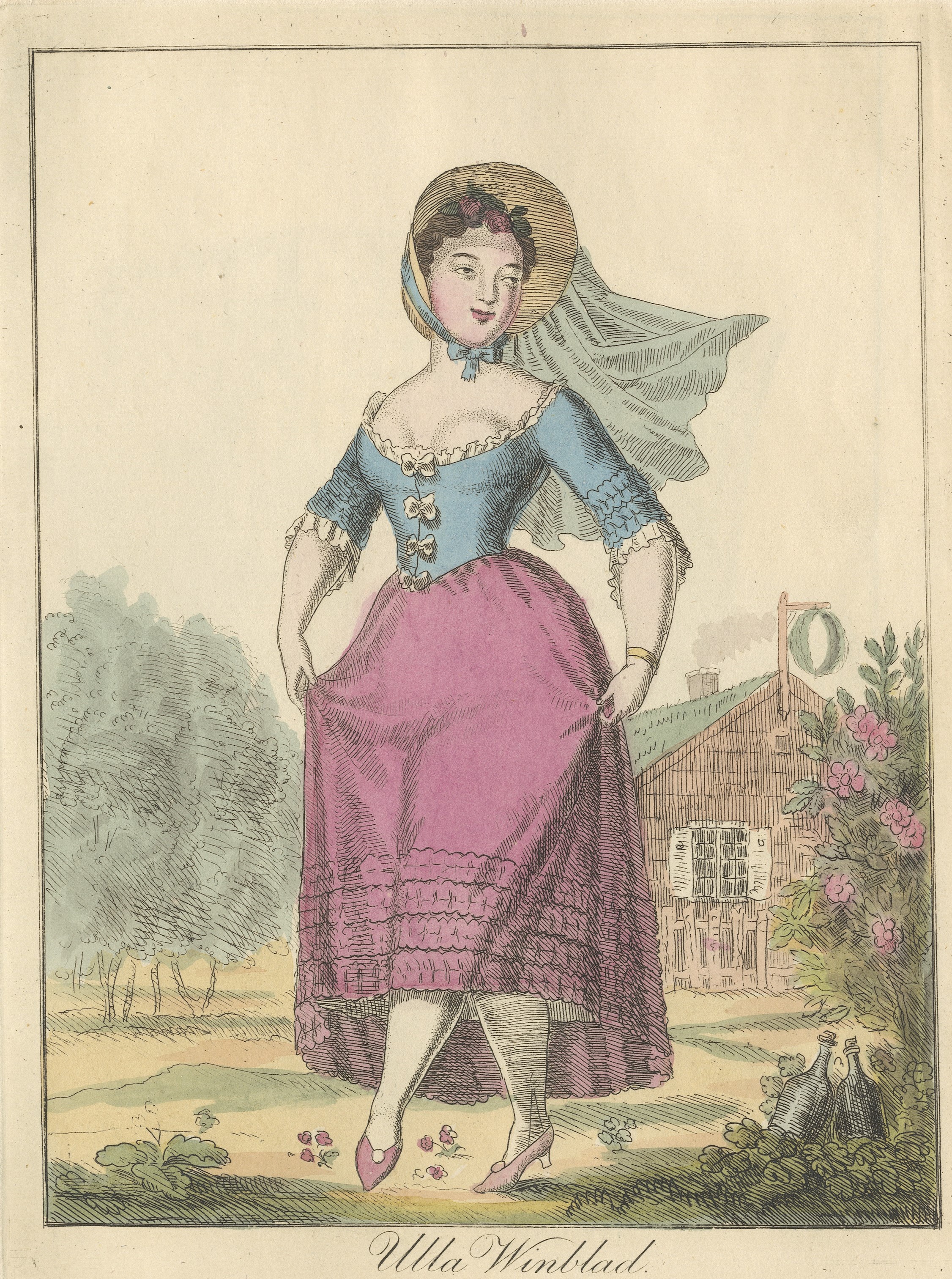