Maria Moberg was one of the leading figures of the early Swedish pre-school movement, both locally in Norrköping and nationally. She was one of the most well known promoters of Swedish kindergartens.

Maria Moberg was born in 1877 and was the younger sister of fellow pre-school pioneer Ellen Moberg. Her brother was Axel Moberg, professor of Eastern languages. The siblings grew up in a well-to-do home in Norrköping. Their father, Wilhelm Moberg, was a doctor. Their mother, Sara Moberg, was the sister of Gustaf and Edward Ringborg, business leaders who made their livelihoods on trading with the expanding Swedish industries. Maria Moberg never married.

Maria Moberg’s educational background was multifaceted. Having graduated from Norrköping’s advanced school for young women, and then taking courses at Fleurie’s Språk- och Hushållskolan (languages and home economics school) in Askersund, she further took language courses in England and a kindergarten course in Stockholm in 1899. She followed this up with drawing courses at Nääs slöjdlärarseminarium (handicrafts teacher teaching programme), training at Pestalozzi-Fröbel-Haus in Berlin, as well as at Sesame House and the Fröbel Educational Institute in London. In addition, she also attended a practical and theoretical course organised by Maria Montessori in London in 1921.

When discussing the Moberg sisters’ work, Maria Moberg is always described as the initiator and the optimist, and as the one who put most of her energy into the educational side. The mouthpiece of the Swedish kindergarten movement, Svenska Fröbelsförbundets tidskrift, portrays her as an “educational genius” with an unusual talent for entering into a child’s world. She appears to have exerted a major influence over the students she taught at the Fröbel institute. Her activism was comprehensive, as was her ability to identify those aspects of educational history of ideas which were relevant for the development of this new field. Although she was viewed as extremely knowledgeable she did not consider herself to be fully educated. She retained her curiosity and continued to attend conferences and meetings where children’s educational theory was discussed. According to her contemporaries it was simply impossible to determine just how many courses she had attended.

Maria Moberg’s contributions were not limited to the sphere of kindergarten development and training. For 26 years she was the publisher of the kindergarten movement’s journal, and as such she was often called upon to give lectures and to write texts. She was also a member of the board for the Norrköping folkskola (adult education school), as well as on the Norrköping child welfare commission. She remained a member of Norrköping’s Fröbel board until she died. Along with her sister, Ellen Moberg, Maria Moberg’s contributions were rewarded with the Illis quorum meruere labores medal of the fifth degree and Norrköping town’s medal of honour, the St. Olof medal.

Both Maria and Ellen Moberg formed extensive social networks which included women of the bourgeoisie active in child welfare and social work. These women included the likes of Disa Beijer, Anna Warburg, Elsa Beskow and Alice Tegnér. The relationships between these women generally concerned both professional and private matters. The social networks were of great significance to the Moberg sisters’ activities. For example, it was their contact with Alice Tegnér which enabled the publication of their songbook Sånglekar för barnträdgården och småskolan, 1913, with Alice Tegnér herself.

Maria Moberg died in Stockholm in 1948. 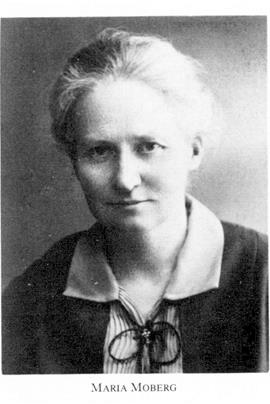