Märta Palm ran Mjölkdroppen in Hagalund, Solna for nearly three decades. This institution was later transformed into a municipal childcare centre, albeit modelled on Mjölkdroppen.

Märta Palm was born in Visby in 1892. Her parents, Alfred and Fredrique Palm, worked hard to provide for their six children. They worked the land and were part of the dying tradition of cattle-herding within the city walls. Fredrique sold butter and milk from the kitchen door and later at the town square. Alfred had trained as a brewer in Germany and worked at a brewery in Visby of which he eventually became the head. He also upheld political roles, including that of chair of the poor relief board.

According to Märta Palm’s own notes there was always work to be done at home. Nevertheless, there was still time for games and excursions. Alfred was particularly devoted to his children and created many toys for them. He had grown up in a carpenter’s home and was a very accomplished carpenter himself.

Märta Palm gained her school-leaving qualification from the Visby girls’ school in 1909. She then worked as home-help for a school principal’s family in Lund from 1909–1912. The family lived in an eight-room house and the household comprised seven people. Once a week a cleaner came in. This was “a very meaningful time” in Märta Palm’s life during which she attended the Goetheklubben and was present on occasions when 25 guests were hosted and the family would put on games, puzzles, musical performances and more.

Märta Palm eventually put her childhood dream of becoming a nurse into action. She turned 21 in 1913, thus old enough to begin training, and so Märta Palm began the two-year nursing course offered by Röda Korset (Red Cross) in Stockholm. Röda Korset had student accommodation for those attending from outside Stockholm but during the first year of studies all students had to supply their own work clothes. Märta Palm received 10 kronor a month in pocket money from her parents and this had to cover her living expenses.

As Märta Palm sat her qualifying exams in the spring of 1915 the First World War was in full-force. Following a holiday at her parents’ home on Gotland Märta Palm was sent into service in Roma, 17 kilometres outside of Visby. The German minelaying cruiser Albatross, carrying 230 crew, had been torpedoed by the Russians just off of Gotland. Although the vessel had set course for Swedish waters in order to avoid being attacked, 28 crewmen had nevertheless been lost and 24 wounded remained onboard. Märta Palm and others in Roma set up a functioning war hospital on the grounds of an old infectious diseases hospital where “one casualty after another arrived”.

In 1916 Märta Palm undertook three months of service on the transport vessel Eolus which transited between Trelleborg and Sassnitz, transporting prisoners of war. Here she was able to make use of the German she had learnt from her father and at girls’ school. When the vessel headed south the passengers were wounded Germans, Austrians, and Hungarians who had been prisoners of war in Russia. On the northbound journey the passengers were Russians who were returning home following spells of imprisonment.

After the war ended Märta Palm worked as a Red Cross nurse tending to patients who lived in their own homes on Gotland or in the Stockholm area. In 1921 she abandoned a temporary position at Saltsjöbadens badhotell (resort hotel) in order to hurry home to Visby as her father had just suffered a major brain haemorrhage. Märta Palm and her mother Fredrique spent three years caring for her father Alfred Palm until his death.

In 1920 the first state-run institute opened which offered nursing training and further qualifications to become a district nurse. Märta Palm completed the nine-month course in Stockholm in 1924. She intended to work as a district nurse in Gotland but was instead persuaded to start working as the director of Solna Mjölkdroppe association and its crèche. When Märta Palm took on the role of director of Mjölkdroppen in Solna in 1924 the non-profit charitable association had already been on the go for two decades and had become one of the largest such organisations in Sweden. In 1925 Solna was one of the areas of Sweden with the most children. In addition to Solna, three municipalities were included, namely Huvudsta, Råsunda, and Hagalund, as well as seven larger villages. Hagalund, which was where Mjölkdroppen began in 1905, had emerged during the late 1800s. Hagalund, the central point for Mjölkdroppen in Solna, was considered by Stockholmers to be a place where children ran wild: there was nothing organised for the children of workers.

Mjölkdroppen was a group of organisations which handed out bottles of milk to mothers who were not able to breastfeed or who were too poor to be able to nourish their own children. Gradually breastfeeding was promoted along with support for mothers. Doctors’s visits and infant health checks became a central element of the enterprise during the 1920s, along with efforts to educate parents. Although it was illegal to do so doctors who worked with Mjölkdroppen in Hagalund provided information on contraception. Mjölkdroppen in Hagalund also ran homes for unmarried mothers and foster homes which lay beyond the suburbs. From 1923 onwards care for foster children expanded to include those under 2 years of age in Solna. In 1926 60 foster children were checked every month.

For Märta Palm, who had by now turned 32, her job finally meant that she could live in her own home. Her pay comprised free accommodation (two rooms, a kitchen, outdoor privy), wood, lighting, and a litre of milk every day, as well as 166.66 kronor a month. Her salary was soon raised to 3,000 kronor a year, which equated to 250 kronor a month – the minimum level required in order to generate a pension.

Mjölkdroppen held doctors’ surgeries in Märta Palm’s home for ten years. The doctor would work in her bedroom whilst the waiting patients were squeezed into her other room and into the kitchen. If a given child needed to be isolated the child would be placed on her bed. Further, Mjölkdroppen staff also ran a crèche in Märta Palm’s home during the first summer, where they catered for between three and five children under the age of two.

In 1925 Märta Palm’s nurse’s surgery was open between eight and ten in the mornings for mothers and children. She provided advice to those who were having difficulty breastfeeding and she showed them how to treat “eczema, umbilical hernias, stomach- and gut-problems, eye cataracts etcetera”, so that children did not have to be taken to hospital for these ailments. Even after Mjölkdroppen had been transformed into a municipal childcare centre in 1945, of which she was the director, Märta Palm continued focusing on home visits. She spent five to six hours every day visiting homes.

This heavily expanded enterprise at Mjölkdroppen in Solna soon became well-known and in 1928 Märta Palm began to receive students from the district nurse school, from the social childcare training course, from Röda Korset, from Sophiahemmet, and from Statens sjuksköterskeskola (state-run nursing school). Between the years of 1928 and 1952 a total of 2,800 students came through Märta Palm’s doors. Without these students the staff would not have managed the flow of mothers and children. In 1928 Mjölkdroppen undertook 2,160 home visits and received 1,007 patients at their surgeries.

On 1 October 1934 Mjölkdroppen was given fit-for-purpose premises in the former workhouse in Solna. This building included a bathroom and a toilet and in the cellar there was space to store ten prams. Mjölkdroppen now had a sizable waiting room, doctor’s surgery, store room, a small kitchen, a staff room, and three rooms for the directors, which included part of the hall, bathroom and toilet. This was a huge change for Märta Palm, who described the premises as “light, spacious, and inviting. It was wonderful for me to finally, after ten years, have my own office!”.

Mjölkdroppen in Solna continued expanding, offering annual health checks for all registered children. These checks continued until the children began attending school. The association also began to care for school children, holding “parent evenings with enlightening lectures and social gatherings”. It was primarily Märta Palm who pushed through these changes in the organisation as it was she who was most engaged and was constantly working. Given the great number of needy people in Solna Mjölkdroppen also began to provide poor relief. The association ran a crèche and, for many years, they held a Christmas celebration in conjunction with the priest, where 20-30 families were provided with clothing and toys for the children, food, a waxed cloth, Christmas magazines, and sometimes even with money.

Until 1940 Märta Palm worked all year round. When she was finally awarded a day off every other week in 1940 she then took on setting up Sankt Martins förening (association), where mothers could learn to repair or sew new clothes for children. Märta Palm devised an outfit for children which comprised one sole piece of cloth instead of five separate pieces. The magazine Husmodern described the outfit as “almost perfect” and featured it in several articles as well as selling a pattern for it and even selling completed versions.

Throughout her life Märta Palm dedicated much time and energy towards her relatives, both young and old. She often visited relatives abroad: she made several visits to cousins and their children in Denmark and the USA. She also visited her sister, Ingrid, during the time she worked as a physiotherapist in Germany and Belgium. Märta Palm’s brother lived close by with his family in Drottningholm.

Märta Palm died in 1974. She lies at Norra kyrkogården (the Northern cemetery) in Solna. 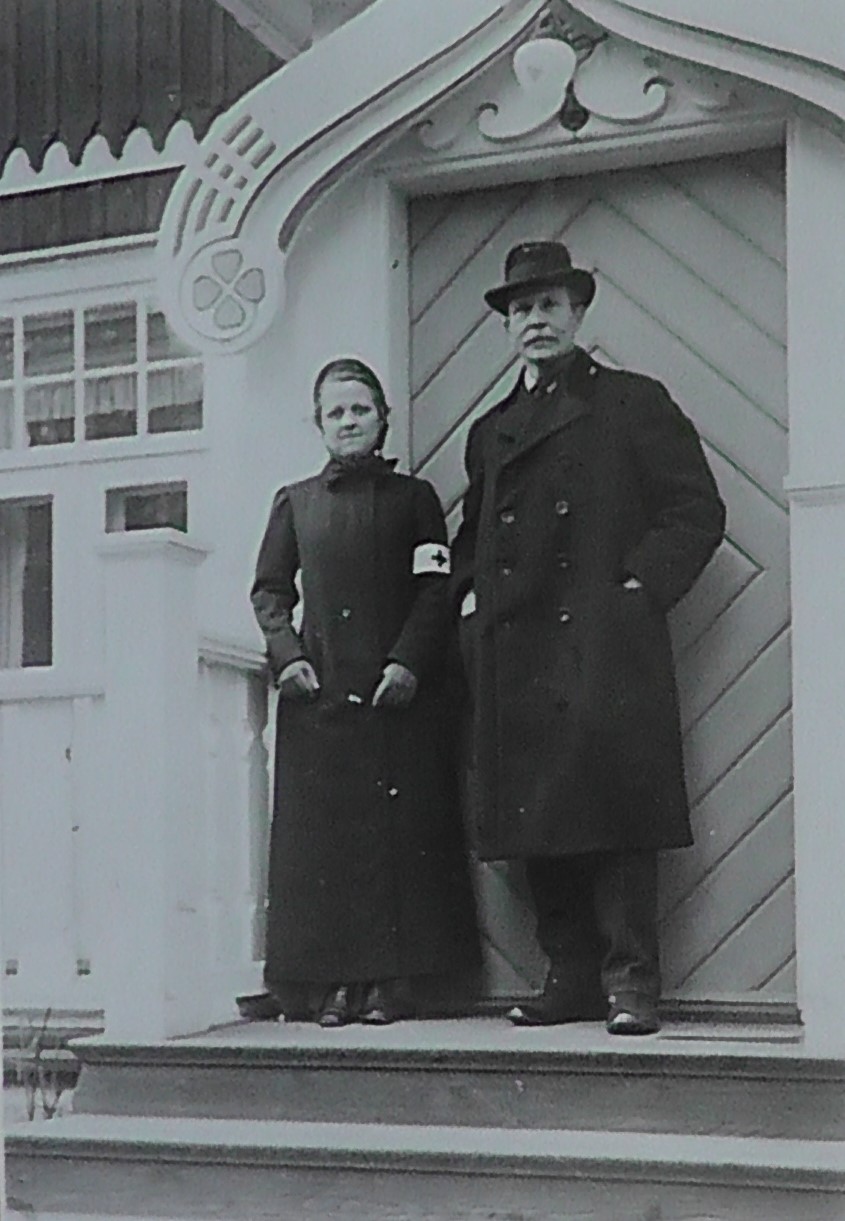