Martha Larsson was Sweden’s first permanent woman foreign correspondent. From 1947 until 1981, she was responsible for the major Swedish daily newspaper Svenska Dagbladet’s editorial office in Rome. She was also a poet, author and translator.

Martha Larsson grew up at Sofiedal, a farm near Trelleborg in southern Sweden. Her parents, the farming couple Karolina Jönsson and Edvard Larsson seem to have accepted that she and her younger sister Dagny did not want to take over the farm but to go their own ways. It is true that Dagny was educated as a farm foreman, but her real career was as an artist. The sisters inherited Sofiedal in 1938 however, when their father died. They kept on the farm, took care of it and lived there together when they were in Sweden. Dagny and Martha Larsson supported and helped each other through the various phases of their lives. In a letter from1996, three years after Martha Larsson’s death Dagny wrote: “We were very close to each other. I’ve always been enveloped by her great love and concern.”

In 1919, after four years of elementary school in their home village, Martha Larsson continued her studies at Lund’s grammar school for girls. She completed the school’s seven-year education and complemented her final results from 1926 with a business course, which gave her qualifications in typing, shorthand and business correspondence. Equipped with these, she was appointed to a post at a major Swedish company in Västerås in January 1929: Allmänna Svenska Elektriska AB, ASEA. She remained at ASEA for slightly more than four years, of which about two were an appointment at the company’s office in Paris. During her time in Paris, Martha Larsson attended lectures on journalism at the city’s École Supérieure de Journalisme. The college was one of the world’s first educations in journalism, founded in 1899. It was renowned for its secularity and republicanism, and it welcomed women students and also foreign students.

The attraction exercised by a career in journalism on Martha Larsson was not at all odd. The profession offered one of few opportunities for women to move freely in society, earn their own money and live independently. Her remaining notebooks witness to the fact that Martha Larsson had ever since her childhood nourished ambitions to be a writer. Longer reflections on the works of philosophers and authors share the pages with her own views and attitudes: “I love rules and theories”, she noted on 15 September 1930, “but only when their content is alive and mobile. Life itself must create its rules, they may not be artificial.” This type of productive and decided tension between theory and practice, as well as the precedence of the living, guided Martha Larsson in her future work as a journalist, poet and translator.

At the age of twenty-five, in June 1933, Martha Larsson began to work as a general reporter at the major daily newspaper Svenska Dagbladet in Stockholm. In January 1935, she became a permanent colleague on the paper and remained faithful to it until she retired. It is possible that the newspaper had good personnel politics which meant that women applied to work there. In the 1930s, the newspaper was jokingly called “Svenska Dambladet” (“Swedish ladies’ paper” instead of “Swedish daily paper”) since several women journalists were working in the editorial office; 9 women, in comparison with 53 men. Together with her women colleagues, among them Ven Nyberg, Greta Bolin and Astrid Ljungström, Martha Larsson filled the columns “Idag” and “Marginalen” with varied entertaining content. She wrote cultural articles and articles aimed at women readers, wrote reportage on happenings in the city and was an energetic news reporter. One count shows that Martha Larsson wrote over 350 articles per year.

It was perhaps her industriousness and versatility, including good language skills, that led to her being sent to Rome in 1947 as Svenska Dagbladet’s correspondent with responsibility for the newspaper’s editorial office in the city. She covered a broad spectrum of political, social and cultural developments in Italy. In her news reports, columns on everyday life in Rome (under the signature Charlotta) and in her many initiated and knowledgeable articles “under strecket”, (“under the line”)

Martha Larsson spread knowledge and explanations of Italian conditions, which in many cases could appear complicated seen from a Swedish horizon. Through her care, Swedish readers became acquainted with Italian cultural personalities and their work, like Alberto Moravia, Pier Paolo Pasolini, Federico Fellini, Ettore Scola, Dario Fo, Umberto Eco and many more. All in all, she published about 2,500 articles during her years in Italy.

For Svenska Dagbladet’s reckoning, Martha Larsson also wrote verses and short stories, however her poetry and short stories were also published in book form, in the poetry collections I denna cirkel in 1944, Vår fjädervikt är oerhörd in 1948, De svåra orden på t in 1964 and Fjärrkontakter in 1980, and the collection of short stories I drömmen var det så in 1946. The reviews through the years were generally positive. Her debut was described as the most promising of the year, and her subsequent publications were received with great interest.

Martha Larsson’s poetry belongs to the modernistic tradition on account of its form, of which she made skilful use. Her poems always have a direct address and express general human existential reflections and broodings, making them accessible to everyone. Despite this, Martha Larsson is not at all known in Sweden. She belongs to “the writers of the forties who have been unjustly smuggled out of sight”, as was stated in a review from 1948. Perhaps her authorship was overshadowed by more experimental and bolder poets like Rut Hillarp? Perhaps her many years abroad contributed to a kind of estrangement from the Swedish literary scene? When her last volume of poetry appeared in 1980 however, it was precisely the perspective from abroad offered by Martha Larsson’s poetry that was what several critics held out as her strength.

At the beginning of the 1980s, Martha Larsson left Rome to spend the remaining part of her life with her sister Dagny in their parental home Sofiedal. She died in 1993, at 85 years of age, and was buried in Västra Alstad’s New Cemetery. 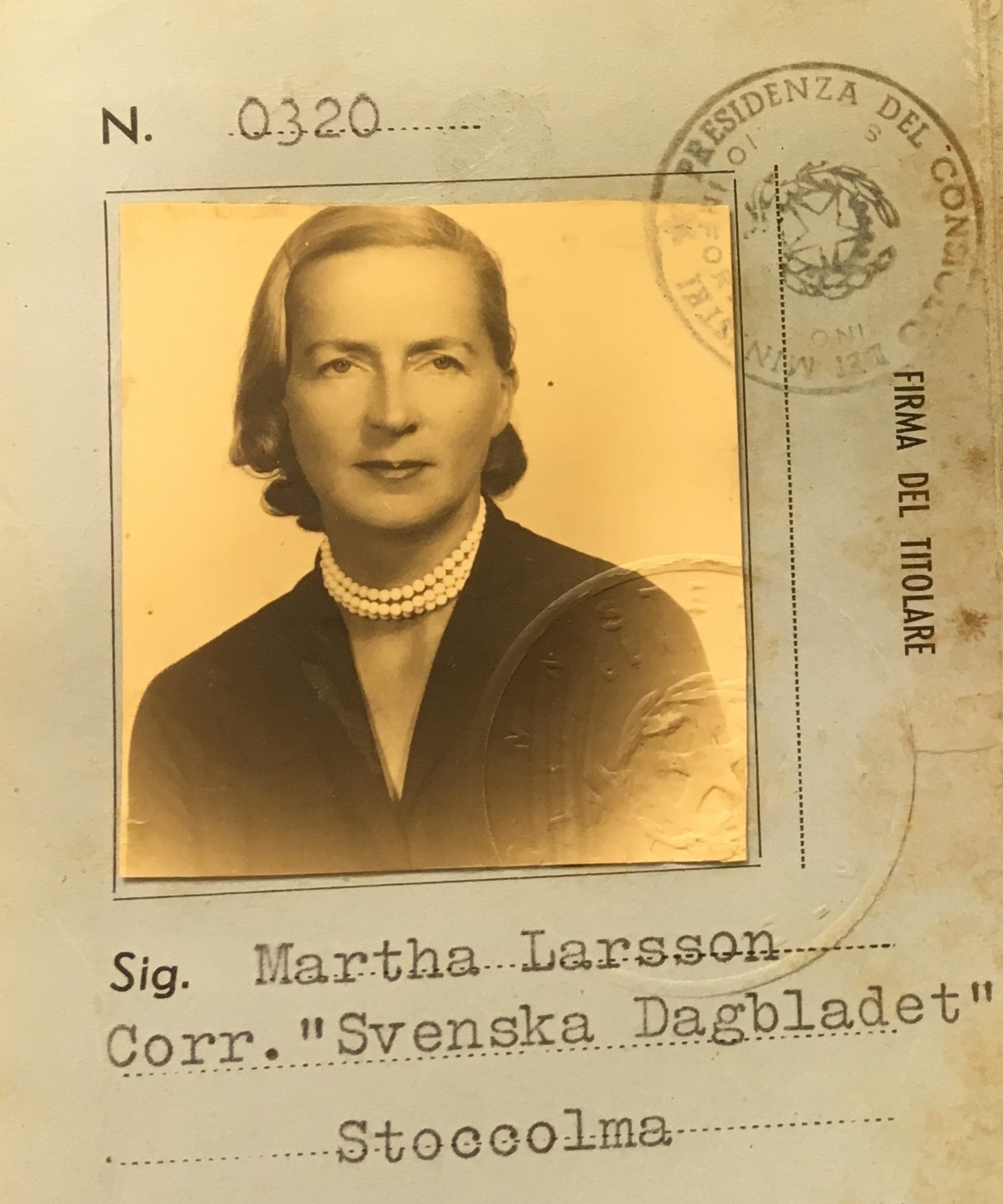