Mathilda Roos is primarily associated with the literary sphere of the 1880s. She was one of the writers who was active in the contemporary debates on women.

Mathilda Roos grew up in a bourgeois environment as the eldest of two girls. Her younger sister was Anna Roos. She was well-educated and was taught both in her home and at the Lublin and Åhlin schools in Stockholm.

At the beginning of her career as a writer she was inspired by Strindberg’s Röda rummet and she too tried to portray reality as she saw it around her. Her breakthrough as an author came with the novel Marianne, 1881, which was very successful. That same year Höststormar (released as a book in 1886) was serialised in Stockholms Dagblad. The novel was viewed as a key novel and criticised for its depictions of several people who were still alive. Mathilda Roos did not shy away from covering sensitive subjects. Berättelser och skizzer, 1884, portrays love between women. Hårdt mot hårdt: berättelse, 1886, depicts a young woman’s trials after losing her father. She is forced, amongst other things, to take a job as a switchboard operator and ends up becoming a morphine addict.

At the end of the 1880s the direction of Mathilda Roos’ writing changed, partly as a result of a religious crisis brought on by the death of her father and a broken engagement, and partly as a result of changes to the literary ideals, which involved a distancing from social realism. Familjen Verle, 1889, portrays a family that ends up insolvent after the father goes bankrupt and commits suicide, and follows the struggles of the four daughters in their attempts to realise their life goals. One of them wants to keep her faith alive. However, Mathilda Roos never abandoned her social activism. Genom Skuggor, 1891, is situated in sawmill town and tells the story of a young priest who takes an interest in the working conditions of the local workers and supports their plans to strike. A pro-worker priest also appears in Hennes son, 1904. Mathilda Roos’ most widely read novels was Hvit ljung, 1907, which recounts a junior school teacher’s harsh existence in the countryside and which came to be viewed as a contributing factor in improving conditions for female teachers.

Mathilda Roos died in Stocksund in 1908. 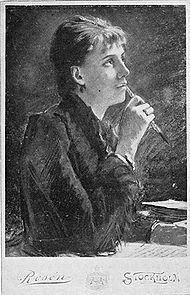