Mia Leche Löfgren was a journalist, an author, and a peace activist. During the Second World War she was one of the leading anti-Nazi voices in Sweden.

Mia Leche Löfgren was born in Lund. Her father worked as a docent in zoology there. When he got a position at Stockholms högskola (college) in 1880, the whole family moved to Stockholm. In 1884 her father was appointed professor of zoology. Meanwhile, Mia Leche Löfgren attended the Whitlock coeducational school, which followed an educational reform syllabus and where one of her teachers was Ellen Key.

Mia Leche Löfgren was exposed to Stockholm’s intellectual and artistic circles at an early age through her parents’ social networks. Despite this, she did not continue her education and instead married Fredrik von Friesen when she was just 22 years old. Her surviving diaries reveal that this was not a decision she took easily. They went on to have two children and remained married for eight years. She then left her husband in order to marry Eliel Löfgren, a lawyer who was later appointed Minister of Justice and Foreign Minister. They had a daughter together. Their eventual divorce became a stormy affair and Mia Leche Löfgren had her children removed from her, along with any opportunity of seeing them. Her son later testified to the hatred toward his mother that was engendered within the family. They were, however, later reunited once he came of age. Mia Leche Löfgren sadly never saw her eldest daughter again, and the girl died at the age of 11. Mia Leche Löfgren has described the pain she suffered because of this in her autobiographical book entitled Upplevt.

Mia Leche Löfgren made her debut as a literary critic in the conservative journal Vårt land, for which she worked between the years of 1906 and 1908. She was tasked with writing about those books which the chief literary critic of the journal, Carl David af Wirsén, did not care for. She quickly developed her own voice and became a contributor to Idun, amongst other publications, for which she wrote reviews and columns, and also provided “at-home-with” reports. Mia Leche Löfgren thus found herself at the heart of the liberal, cultural, and women’s movement élites of Stockholm. Her nearest friends included not only Ellen Key but also Marika Stiernstedt and Vera von Kræmer. She was a deeply-convinced pacifist and was active in peace movements such as the relief agencies of both the First and the Second World Wars.

Mia Leche Löfgren was amongst the women who gathered at The Hague in 1915 to protest against the ongoing world war. Elin Wägner, Emilia Fogelklou, and Matilda Widegren also attended as Swedish representatives. At The Hague Mia Leche Löfgren contributed to the establishment of the International Women’s Organisation for Peace and Freedom, of which she was an active member for most of her life. The organisation is still (2017) in existence. From 1942–1950 Mia Leche Löfgren was chair of the Göteborgskrets (Gothenburg circle), and from 1946–1952 she was chair of the Swedish section. She was also a founder member of various relief organisations during both world wars. Further to her practical humanitarian efforts she also made official contributions to newspaper articles and public speeches, in which she passionately condemned anti-Semitism and the glorification of violence in Nazi Germany. She stood up for those who were persecuted. This included the German journalist and pacifist Carl von Ossietsky, who was awarded the Nobel peace prize in 1935, but was placed into a concentration camp and was refused permission to leave Germany.

Mia Leche Löfgren became a national celebrity through her anti-Nazi outpourings in Göteborgs Handels- och Sjöfarts-Tidning during the interwar period and the Second World War. The editor of the newspaper, Torgny Segerstedt, had given her access to his newspaper’s columns since 1916 and in the ensuing years she became one of the leading anti-Nazi voices in that paper. With the exception of an early period working for Göteborgs-Posten she remained loyal to the former paper throughout her life. Upon the death of her husband in 1940 Mia Leche Löfgren moved to Gothenburg and became a very close friend of Torgny Segerstedt due to their close collaboration. Her portrait of Segerstedt in the book Hård tid is a lengthy tribute to his courage whilst also being an interesting and detailed portrayal of working with refugees, Nazism, and anti-Nazism in Sweden.

Mia Leche Löfgren’s first publication was a biography of Ellen Key in 1930. Here she provides a loving portrait of her old teacher but is hardly uncritical of her. She then continued by publishing a series of very interesting semi-autobiographical and cultural-history books on her period. She was openly subjective in her point of view. She based her work on her own reactions to political developments and portrayed her exposure to and her impressions of several culturally and politically significant individuals. Eliel Löfgren, her second husband, is a central figure in many of her books. Her most personal book, Upplevet, also portrays her life-long friendship with the author Marika Stiernstedt.

Mia Leche Löfgren returned to Stockholm in her autumnal years, and lived in the capital throughout her final decade. She is buried at the Norra crematorium in Stockholm. 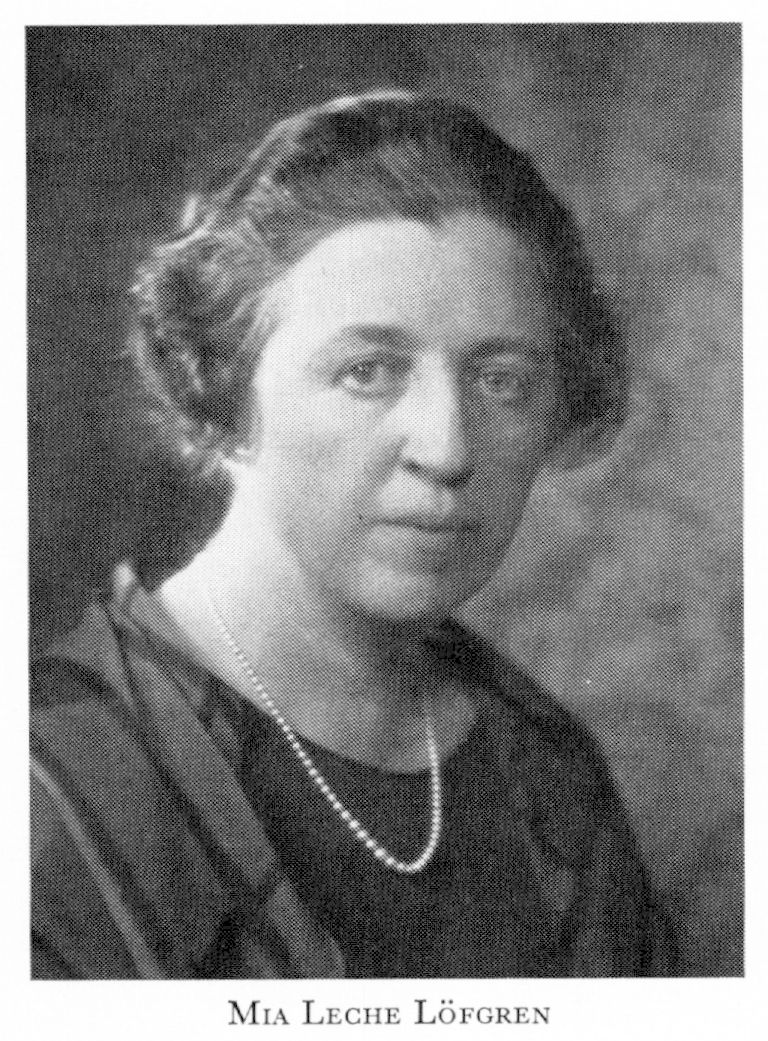