Mimi Pollak was an actor, director, and drama teacher who was also the first female director of the Dramaten theatre in Stockholm.

Mimi Pollak was born in Karlstad in 1903. Her parents were Viennese emigrants. Her mother, Maria Theresia, was a concert pianist and her father, Julius Martin, was an engineer who later worked as managing director of an engineering workshop. Her father was also very interested in literature. Mimi Pollak had already appeared on the stage of Karlstads teater at the tender age of seven in a benefit performance of Lehár’s operetta Glada änkan. Her parents arranged private lessons for their daughter who was later enrolled at Dramatens elevskola from 1922–1925, where her classmates included Greta Garbo and Alf Sjöberg. Mimi Pollak and Greta Garbo became close friends. When the latter moved to Hollywood in 1925 they began a correspondence which they continued throughout their lives and served as the basis for the novels Djävla älskade unge, by Tin Andersén Axell and published in 2005, and Lena Einhorn’s Blekingegatan 32, published in 2013. Mimi Pollak married a fellow actor named Nils Lundell. Their marriage lasted just over a decade from 1927–1938. They had a son named Lars, born in 1930.

Mimi Pollak got her first acting role in 1922 through a competition advertised in Filmjournalen. This was a part in Gustaf Molander’s amateur-film adaptation of Prince Vilhelm’s Pärlorna. Mimi Pollak’s profession career spanned about thirty films from 1923–1991. She played Fredrika Bremer in the 1947 film Den långa vägen, a peasant woman named Erika in the 1949 film Bara en mor, and she was also involved in the likes of Sommarlek, a 1951 film by Ingmar Bergman, Långt borta och nära, by Marianne Ahrne in 1976, Ingmar Bergman’s 1978 film Höstsonaten, the 1986 TV-series Gösta Berlings saga, Agnes Cecilia from 1991, and the 1995 TV-film I staden bor en ängel, by Birgitta Öhman. Given that she was active for a period of 72 years Mimi Pollak is one of the longest consecutively active Swedish actors.

Immediately after her studies Mimi Pollak became employed at Helsingborgs stadsteater for a season during which she played the daughter of the title role in Thora van Deken (adapted from Henrik Pontoppidan’s story “Lille Rødhætte”). She then returned to Stockholm were she was employed at Komediteatern from 1925–1931. There her roles included Ophelia in Per Lindberg’s production of Hamlet in 1926 and the character of Krog-Jenny in the Swedish premiere of Brecht and Weill’s Tolvskillingsoperan in 1929. She performed the part of Maria in Per Lindberg’s production of April, april! Eller Vad ni vill – an adaptation of Shakespeare’s As you like it – at Blancheteatern which ran from 1932–1933. She received notable public and critical acclaim in 1934 for her role in the opening performance on the main stage at Stockholms stadsteater at Götaplatsen in which she played Ariel in Stormen. She then went on to play Jessica in Köpmannen i Venedig.

Mimi Pollak worked at various Stockholm theatres during the years of 1935–1942. At Blancheteatern her parts included Mary Tillford in Lillian Hellman’s De oskyldiga (The Children’s Hour), Sonja in Tjechovs’s Onkel Vanja, and Döv-Anna in Lagerkvist’s Midsommar i Fattighuset. Further, she appeared in several of the Kar de Mumma revue-shows towards the end of the 1930s.

Mimi Pollak was employed as an actor and instructor of stage movement at Dramatens elevskola in 1942. Teaching formed an important element of her work, alongside her acting, until 1964. Mimi Pollak performed a total of 32 roles at the Dramaten theatre, which included plays by Tjechov, Strindberg, Shakespeare, amongst others.

In 1948 Ragnar Josephson, then the newly-installed head of the Dramaten theatre, observed Mimi Pollak’s rehearsals of stage movements with her students and subsequently offered her the chance to direct. In her memoires, entitled Teaterlek and published in 1977, Mimi Pollak noted: “Initially I believed him to be drunk, and then, having brushed aside that shameful thought, I thought he was joshing with me. A woman as director!”. Her first production was the modern, absurdist, later classic, Jungfruleken by Jean Genet. The newspaper Svenska Dagbladet ran a comment, on 18 September 1948, stating that: “Mimi Pollak’s directorial debut was remarkably successful: her intelligent stage directions gave the performance a nicely measured, confidently performed tone”. Although she continued to achieve success with her acting roles, from 1948 onwards Mimi Pollak came to prioritise her activities at the Dramaten theatre. In total she directed about 60 plays up to the 1970s, including Collette’s Chéri in 1950, Jean Anouilh’s Colombe in 1951, Shelagh Delaney’s En doft av honung in 1959, Beckett’s Lyckans dar in 1962, Ödön von Horváth’s Kasimir och Karoline in 1970, and Molière’s Tartuffe in 1971.

In addition to her pioneering role within the theatre Mimi Pollak’s work in the sphere of Swedish cinema also formed a contribution to the women’s movement during the 1950s. The three films she directed in that decade were all themed around women’s rights to independence. These were two shorts produced by Kooperativa Förbundet (KF; cooperative association), entitled Mamma gör revolution, from 1950 including a performance by Anna Lindahl, and Malin går hem, from 1953 which had Naima Wifstrand and others on the cast roll, and the full-length film Rätten att älska, from 1956 featuring Märta Dorff, Pia Skoglund, Stig Järrel and others. Rätten att älska was one of only twelve Swedish full-length films to be directed by women during the 1950s.

Mimi Pollak was awarded the royal Litteris et artibus medal in 1970. She died in Stockholm in 1999. She is buried at Lidingö cemetery. 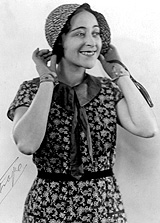