Nina Benner-Anderson was a nurse, suffragette, liberal politician, temperance fighter and peace activist. She was the first woman member of the town council in Västerås.

Nina Benner-Anderson was born in 1865 in Landskrona, the daughter of Carolina Nilsson and Magnus Åhlander. She was born two months prematurely with the consequence that she almost did not survive. Her first childhood years, that she herself has described as happy, were spent with three younger siblings among the convicts in the prison fortress in Landskrona, where her father was an accountant. When Nina Benner-Anderson was only ten, her father died. At that point he himself was serving a prison sentence for embezzlement, and the family had already moved from Landskrona to Lund. Their mother supported them by working as a dinner lady for students in the town.

Nina Benner-Anderson attended the language researcher Edvard Lidforss’ private school in Lund. When she was 18, her mother too died and Nina Benner-Anderson then had to shoulder the responsibility for her younger siblings. Three years later, just before Christmas in 1886, she left Lund and travelled to Stockholm. In the capital, she became a pupil at the nursing school Drottningens sjuksköterskeskola (later Sophiahemmet) that had been started a few years previously. The choice of profession, like her life-long engagement for equality, justice and for the vulnerable groups in society, was certainly stamped by her experiences of the family’s hardships and the proximity to the prison environment during her childhood. After qualifying, she worked as a nurse for a couple of years.

In 1891, Nina Benner-Anderson was appointed as a nurse at the cottage hospital for workers at the Domnarvets Jernverk works. During her time at the hospital, she met Gustaf Anderson, an engineer, and the couple were married in the autumn of 1893. After a number of years of moving around, 40-year-old Nina Benner-Anderson with her husband and four sons settled in Västerås in 1905—1906. In Västerås, she began to get involved in associations for women’s rights, temperance and peace, which were to influence much of her life in the future. She is said to have been a skilful organiser, which surely fitted her well for life in such associations.

In the autumn of 1906, the National Association for Women’s Suffrage (Landsföreningen för kvinnans politiska rösträtt, LKPR) started a local section (FKPR) in Västerås. Nina Benner-Anderson was one of the founders and in 1909 she was also elected as a board member. When the politically active women in Västerås put their own list of candidates forward at the town council election in 1912, she was their first name, as the newly elected chairwoman of the suffrage association. After a successful election, she took her place as the town’s first woman town councillor. She was mainly active in various social issues and tendered motions on among other things the setting up of a so-called “Milk Drop” (Mjölkdroppe) and suggested measures against the ongoing acute food crisis.

Nina Benner-Anderson was re-elected as a town councillor on the liberal list in 1916. The same year, she resigned from the local chairwomanship of the FKPR and became instead the chairwoman of the Västmanland province’s section of the LKPR. After the death of her husband in 1918, she terminated her membership of the town council prematurely. With her children, of whom her oldest son was seriously ill with tuberculosis, she moved to Bromma in Stockholm.

She continued however to be active in the suffrage movement and in 1921 she was made a member of the committee that continued to engage in the LKPR’s international work. Nina Benner-Anderson was one of the delegates at the International Woman Suffrage Alliance’s 9th Congress in Rome in 1923.

Nina Benner-Anderson was one of the women for whom the struggle for the right to vote and equality were closely related to the issue of achieving temperance goals in society. In 1902, she had become a member of the Woman's Christian Temperance Union (White Ribbon), and she was the chairwoman of the local section in Ödeborg until 1906. In the Västerås section, Nina Benner-Anderson later became the chairwoman in 1907–1918, also in the provincial district. At the White Ribbon annual general meeting in 1916, she was elected as the chairwoman of the national organisation’s central board, a post she held until 1922. As the chairwoman of the White Ribbon, Nina Benner-Anderson was briskly busy with advocacy and lobbying for the prohibition of alcohol. Among other things, she led several delegations to approach the government on the issue. In 1921, she and Emilie Rathou organised an important prohibition congress. She was also later active in the national committee for the Christian prohibition movement.

Apart from her suffrage and temperance work, Nina Benner-Anderson was strongly engaged in the Swedish peace movement. Within the White Ribbon, she started a special section in 1912, a department for peace work. In the spring of 1915, she was one of a delegation to represent Sweden at the International Congress of Women at The Haag. Nina Benner-Anderson was later a board member, as cashier for the Swedish section of what was to be the Women’s International League for Peace and Freedom (WILPF), that had been founded at the Congress. After the reconstruction in 1919 of the Swedish section of WILPF, she continued as a board member until 1922. She later participated in the Frankfurt conference on modern war methods in 1929 and in 1935 she was a committee member in the peace action Kvinnornas vapenlösa uppror mot kriget, also known as the First of September Movement (Första September-Rörelsen).

On account of her move to Bromma in 1918 and her proximity to the capital, Nina Benner-Anderson became active as a politician even at the national level. She was elected to the Free-minded National Association’s executive committee in 1920 as a substitute. The year after, she participated in the formation of the Stockholm temperance-friendly citizen’s association, a splinter group of the liberal election organisation, and became a board member thereafter. Two years later, the split over the issue of alcohol was also a fact in the Free-minded National Association, although Nina Benner-Anderson favoured continued unity. In connection with the split, she took up a position as a trustee in the Free-minded National Association, first as a substitute, and from 1924 as a regular member. For one period, she was a substitute in the executive committee of the Liberal Women’s Association but in 1925 she resigned from that assignment. She was also a member of a provincial branch of the Liberal Women’s Association for a brief period in 1930.

At the age of 67, Nina Benner-Anderson joined the Quakers for whom she acted as a delegate in 1933—1935. As one of the oldest in the first generation of members, she was described by Emilia Fogelklou as “our dear alderwoman president, with her white hair and her youthful, sparkling eyes”.

Nina Benner-Anderson returned to Västerås towards the end of her life, sickly and almost blind. She died in 1947, 81 years of age, and was buried at the Eastern Cemetery in Västerås. 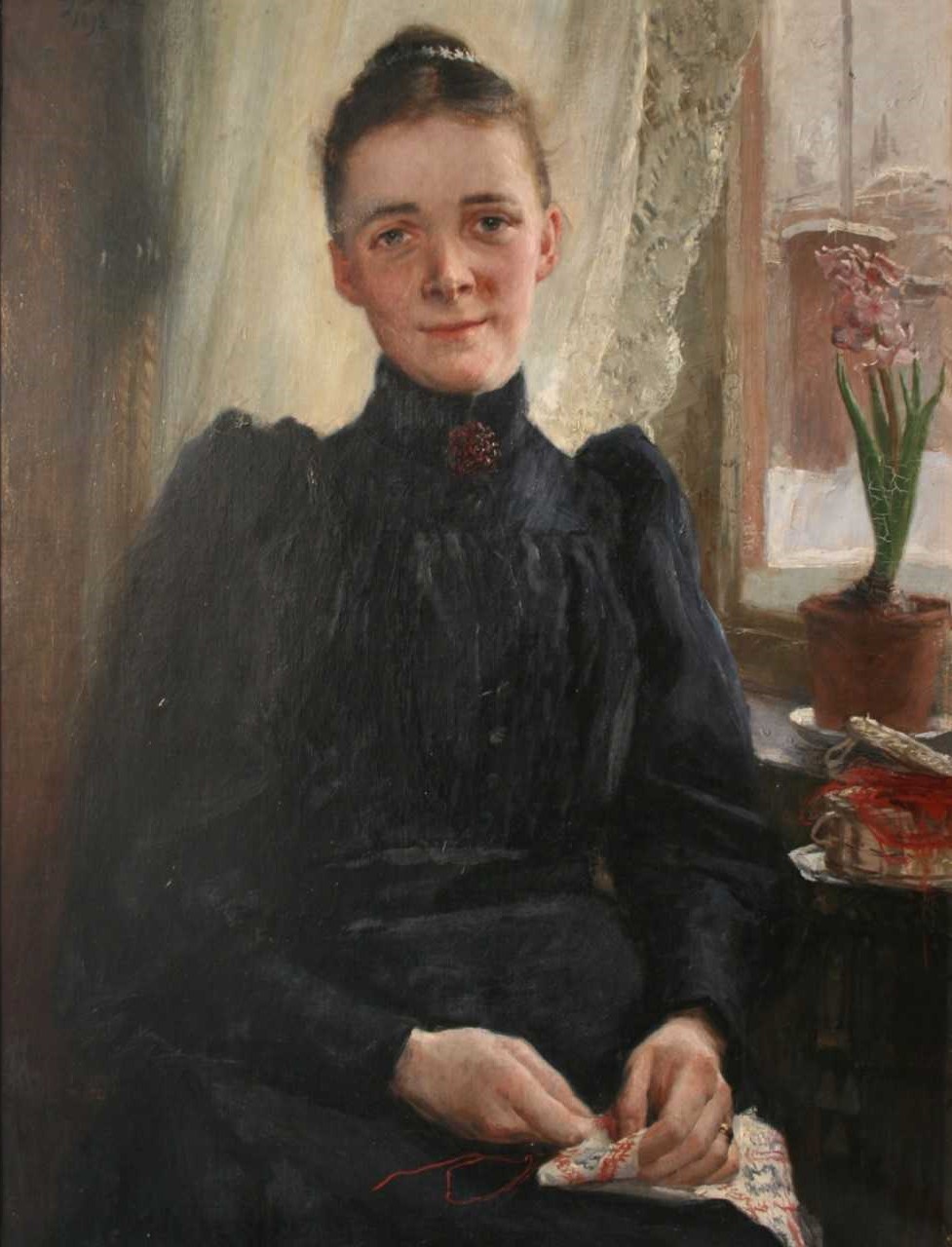 Nina Benner-Anderson. Portrait by Fanny Brate, spring of 1893. In the possession of the Benner family. Photo: Johan Andersson