Oda Berg was the manager of Slöjdmagasinet in Kalmar from 1899. It was run by Hushållningssällskapet. She was one of the pioneers of home crafts and asserted the aesthetic and cultural values of home crafts products.

Oda Berg was born in 1853 at the vicarage in Broby in the southern province of Skåne. Her father Christopher Olofsson Angeldorff was a clergyman, court chaplain and newspaperman. Her mother Sophia Wahlbom from Kalmar died when her daughter was born. Her father remarried twice and Oda Berg had three half-siblings. After her father’s death in 1866, she moved with her half-sister Sofia to her maternal uncle Fredrik Magnus Wahlbom i Växjö, a senior county official. After his death in 1871, she moved to Ljungby just south of Kalmar. Oda Berg lived then with her cousin and married maternal aunt at Köhlby manor house. Two years later, she moved to Kalmar, where she married Fabian Berg who was a grammar school teacher and 22 years older.

Fabian and Oda Berg had a daughter, Ellen, in 1876 and a son, Bengt, in 1885. Bengt Berg became a well-known bird photographer who introduced Canada geese to Kalmar county. Her husband died early, in 1897, and Oda Berg had to find a living.

Hushållningssällskapet with its permanent exhibition in Kalmar had decided to participate in the great Stockholm Exhibition in 1897. Oda Berg was given the assignment of being the judge of the section of women’s work like spinning and weaving in the school and home crafts exhibition organised in Kalmar the same year to select suitable objects for the great exhibition in Stockholm. Oda Berg handed in her own crafts contributions too which were judged by another jury for the group ”Other home crafts products”. Examples of her work were spoons from Torsås and Gullabo.

The Southern Kalmar County home crafts association had a permanent exhibition of home crafts in 1863–1899 in Kalmar, which has meant that it is counted as Sweden’s oldest home crafts shop. Their turnover diminished towards the end, but they decided to reorganise and invest in Slöjdmagasinet under new leadership. The widow Oda Berg was appointed as manager and crafts agent for a period of three years from 1899. The turnover of Slöjdmagasinet the first year was 10,000 kronor which was more than three times as much as the year before. The turnover increased generally speaking every year which showed that Oda Berg was a very capable shop manager. In 1917, Slöjdmagasinet’s turnover was over 61,000 kronor despite the crisis of the war.

Oda Berg was an enthusiast, energetic and full of ideas, and she was able to inspire people around her. She saw to it to produce an Öland costume for Queen Victoria, who was very interested in home crafts, at the beginning of the 1900s. It was influenced by fashion to a certain extent, with a broad belt. It was used at the royal summer residence Solliden on Öland, and costumes were made even for the staff, which gave many women work as seamstresses.

Slöjdmagasinet’s basic idea was to exhibit and sell crafts on commission for a fee of 5 %. Lesser crafts products from poor people could be bought with the aid of an annual sum of 1,000 kronor put aside for that purpose. Hushållningssällskapet’s inspector handed in a complaint in 1903 that Slöjdmagasinet was run as the manager’s private shop, that crafts products were purchased over and above what there was cash for and that wages to the crafts people were kept low. That was when Oda Berg lost her temper and submitted a letter of explanation. She resigned from 1 January 1904. Hushållningssällskapet advertised for a new manager for Slöjdmagasinet, and five women applied. One of them was Oda Berg and she was reinstated.

An enormous effort was made at the Norrköping Exhibition in 1906 when the Finnsjö-Bankeberg company constructed a whole villa that Slöjdmagasinet in Kalmar fitted out with furniture, textiles and crafts products. The green surroundings made it possible to exhibit garden furniture that was also delivered by Slöjdmagasinet. The hope was that this would create a boom outside the county. This way of exhibiting crafts as part of an entire interior decoration was Oda Berg’s idea.

She took the initiative to the South Kalmar County’s home crafts association that was founded in 1908. The aim of this non-profit association was to renew crafts in Kalmar County using patterns and models based on old crafts, and to organise courses and exhibitions. An annual crafts lottery was started to finance the enterprise, which was permitted for the home crafts association but not for hushållningssällskapet according to its statutes. The models were the prizes the first years, but after a few years a free choice of products from Slöjdmagasinet became the prizes. The first ten lottery series were reserved for Queen Victoria for as long as she lived. Gerda Brütte was employed as an assistant by the new home crafts association to look after the lottery. From 1921 onwards, she succeeded Oda Berg as the manager.

Home crafts in Kalmar opened a test weaving institute in 1910 led by the weaving teacher Anna Stenros. There old patterns were copied and new created according to the old textile tradition. At the institute, pupils interested in weaving were also given lessons. The home crafts association also organised courses in other crafts techniques like plant dyeing, braiding as a finish to weaves, basket-making and straw braiding to increase the opportunities for people to support themselves partially or completely by means of their craft.

Oda Berg was not only famous in Kalmar County but also in the rest of Sweden in connection with numerous exhibitions and through her cooperation in the founding of the national association Svenska Hemslöjdsföreningarnas Riksförbund in 1912. The call sent out before the foundation was signed by the initiative-takers Stina Rodenstam, Oda Berg, Emma Zorn and the wife of the county governor at that time in Kalmar, Elisabeth Cederkrantz.

In 1912, Oda Berg encouraged the inhabitants of Öland to search their drawers and attics for old knitted garments to find old patterns that could be produced anew. Through agents in the parishes, many inventories of old crafts were made in Kalmar County. Sometimes purchases were made towards the building-up of a pattern archive for future development. The inventories led to exhibitions highlighting crafts. At an exhibition in Borgholm in 1913, old Öland crafts were in focus, wood as well as textiles, and Oda Berg cooperated in the founding of the Ölands Kulturminnesförening the year after. In connection with exhibitions, medals and money were handed out in recognition of skillful crafters.

Oda Berg held many lectures on crafts and showed magic lantern pictures to inspire and enthuse her audiences to preserve old crafts and themselves start crafting. Her organizational skills were widely known and in 1913 she was awarded the royal medal Illis quorum partly as a reward for this capability. In 1920 she was also awarded the smaller gold medal of the national association Hushållningssällskapet.

Oda Berg was strongly engaged in the Baltic exhibition in Malmö in 1914. The crafts association there had furnished a whole fisherman’s cottage from Öland with a long sofa, ”goose bench” with plate rack, passage mats with grid patterns and a copy of an Öland rag rug, formerly used as a quilt but used here on the floor. Apart from this, a room was shown with, among other things, manor house furniture of birch which inspired Selma Lagerlöf to order furniture for both Mårbacka and her home in Falun.

Oda Berg died in 1931 in Kalmar. She lies buried in the Tegnér Cemetery in Växjö, beside her husband. 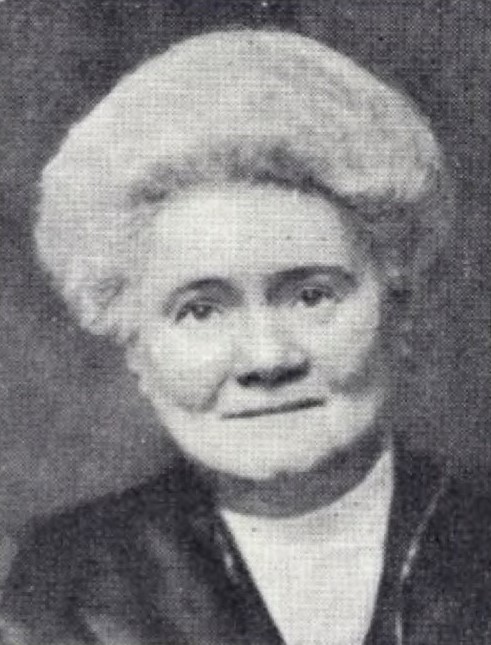