Nelly Krook was a philanthropist who was active in Helsingborg and whose major donations faciliated that city’s expansion, the building of churches, and provided aid to the most vulnerable in the city. Further, she lent money to several entrepreneurs who required funds in order to realise their business ideas.

Nelly Krook was born at Kvidinge parsonage in 1803. She was given the name of Petronella Laurentia but was always known by her nickname of Nelly, or Mamsell Krook. Nelly Krook’s father was one of the richest priests in the diocese and thus she and her siblings wanted for nothing during their childhoods. However, they learned at an early stage that not everyone was as well-off as they were.

Nelly Krook’s father took a keen interest in the poor through his priestly role and set up a poor-relief fund in their local area. He visited the Gyllenbielkeska hospital where he held morning and evening prayers. Nelly Krook and her twin sister Charlotta also attended these sessions regularly, often providing home-baked goods from the parsonage. These early experiences left an impact on Nelly Krook who went on to set up Krookska kvinnohuset (women’s home) in Kvidinge as well as the poorhouse in Klintarp aimed at poor women and their children. Krookska kvinnohuset was completed by 1876 at which time it housed 16 individuals.

Nelly Krook’s twin sister Charlotta got married in 1822 and moved to Gothenburg whilst Nelly Krook remained in northern Scania. She later donated money to Kjellbergska flickskolan (girls’ school), a school that had been established by family into which her sister had married. Nelly Krook herself never married and never had any children, and remained at the parsonage where she cared for her parents. Following their deaths, two years apart in 1852 and 1854, Nelly Krook then moved first to Åby inn where she lived for four years alongside staff who had worked at the parsonage. She then moved to Helsingborg, a city she knew well and where her brother also lived.

When she left the parsonage Nelly Krook hired a housekeeping lady who also accompanied her to Helsingborg. Her name was Agneta Malmgren and she went by the nickname of Agnes. She was 23 years old when she began working for Nelly Krook and despite the more than 30-year age gap between the two women they apparently got along famously. Agnes was one of Nelly Krook’s few friends and a great source of comfort. She remained by Nelly Krook’s side for the rest of the latter’s life.

Nelly Krook lived a simple life funded by the inheritance she had received from her parents. She managed her capital wisely so that in 1870 she was the third-wealthiest individual in Helsingborg, which in itself was an unusual feat for a woman at that time. She willingly donated money to help the town expand and improve over the years. She is perhaps best known for the donation she and her brother made in 1870. They donated a sizable piece of land to Helsingborg town on the condition that most of the land was to be used for “promenader i plantering” (horticultural walks). The siblings had probably taken inspiration from Kvidinge parsonage where they had been able to wander in the greenery. The donated land was given the name Krookska planteringen (plantation) although locally it became known as Stadsparken. The park became open to the public in 1877, implying that Nelly Krook herself probably was able to enjoy a few walks there.

Nelly Krook also donated a lot of money to church-related and educational enterprises, particularly those aimed at women and children. For example, she donated money towards the erection of a new church in Helsingborg, named Gustav Adolfs church. She was never able to visit it herself as it did not open until eight years after her death. She also set up a stipend fund for “apprentices with no means who have shown diligence and competence” as well as a stipend fund for students at Lund university – the latter fund is still awarded now.

Further to making major donations Nelly Krook also used her wealth to lend funds. During the final years of her life she had around twenty debtors comprising officers, business people, and merchants. One of her sizable loans, amounting to 40,000 kronor – the equivalent of 2.5 million today – had been made to Petter Olsson, consul, and she lent almost the same amount to the Kockum family. One could say that she served as a means to allow young entrepreneurs to realise their business plans. She rarely put herself in the limelight and worked quietly behind the scenes. She is described as shy, frugal, and extremely generous.

Nelly Krook died in 1899, aged 86, following a long illness. She is buried at Gamla kyrkogården (the old cemetery) in Helsingborg. In 1935 a street was named after her in Stattena, Helsingborg with the following explanation: “As the memory of the Krook family siblings’ donations have already been enshrined in two streets named after two of the siblings it was deemed appropriate by the authorities that the third sibling, Miss Nelly Krook, should also be similarly honoured”. 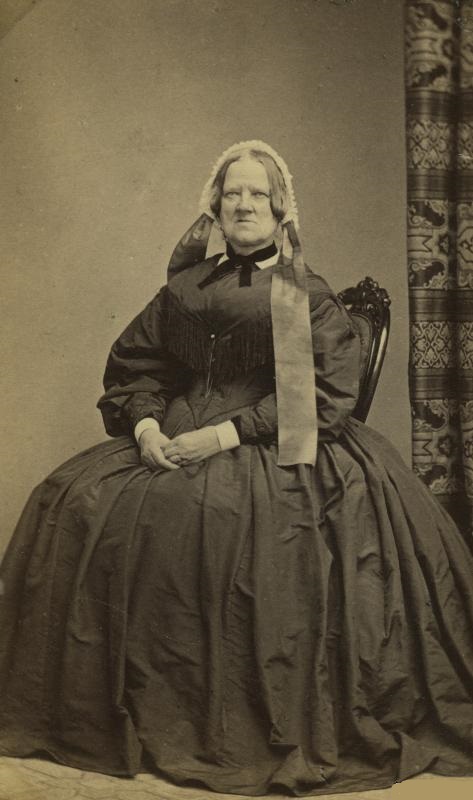