Sofia Holmgren belonged to the first generation of women students at Lund University. She was one of the first women physicians in Malmö and a pioneer of sexual education.

Sofia Holmgren was born in 1864 in a distinctively academic family focused on natural sciences and medicine. Her father, Albert Holmgren, was first a lecturer and then professor of physics in Lund. Her two paternal uncles were also professors: Frithiof Holmgren, professor of physiology in Uppsala, and Hjalmar Holmgren, professor of mathematics and mechanics at the Technical College in Stockholm. Yet another paternal uncle, Emil Holmgren, was an entomologist at the Agricultural Academy. On her mother’s side, she came from the Swedish aristocracy. Her mother Elin was a Stiernstedt, and her maternal grandmother was an Uggla. According to Sofia Holmgren herself, it was her mother who was responsible for her private tuition so that she was able to matriculate as a private pupil in Malmö in 1888 and the same year be registered at Lund University as one of only 20 women students all in all during the 1880s. There she passed in ten years the examinations that were a precondition for becoming a legitimised physician, which was somewhat quicker than the average for her contemporary male student comrades at the same medical faculty. She gained her medical licentiate with very good marks.

After quite a short tour of duty at Medevi Brunn spa in the summer of 1898, Sofia Holmgren established her own practice the same year in Malmö, probably the only one run by a woman after Hedda Andersson had left the city in 1895. Sofia Holmgren remained in Malmö until 1909 when she established herself instead in Stockholm. There she was elected a member of the medical association Svenska Läkaresällskapet. She lived in Stockholm until her retirement in 1934. Apart from her medical practice, she had several assignments as a school doctor, in both Stockholm and Malmö, among others at Tekla Åberg’s grammar school for girls and Oscarsskolan in Malmö, as well as the state Statens normalskola for girls and the state teacher training college for schoolmistresses (Kungliga högre lärarinneseminariet) in Stockholm.

Sofia Holmgren was however to make herself known mainly as a lecturer and teacher on ”sexual hygiene”. She gave courses on the subject in both Lund and Malmö. These were mainly aimed at schoolmistresses, and were – according to one admittedly somewhat acclamatory article in the magazine Dagny – ”packed”. According to Dagny, she presented ”the sensitive subject in such a manner as only the finest and most noble women could do”. In Stockholm, she taught at various private grammar schools as well as at the women’s teacher training college already mentioned. Together with the provincial physician in Malmöhus county, Harald Sörman, she also published the book Hygieniska råd till hemmen beträffande flickor i skolåldern in 1903.

Apart from her academic background, Sofia Holmgren also came from a family in which several members were involved in the popular movements of the time. One of the aunts who had married into the family was the suffragette Ann Margret Holmgren, née Tersmeden. One cousin, son of the above, was the politically engaged physician Israel Holmgren. Sofia Holmgren was also to make her mark for her involvement in associations, and was among other things one of the initiative-takers to the Malmö branch of the national women’s suffrage organisation (FKPR, the local branch of the Landsföreningen för kvinnans politiska rösträtt, LKPR). She was also a representative of this branch in a social work association founded in 1905: Skånska föreningen för socialt arbete. In this she worked for equal rights for women and men in the work arena. In the suffrage movement, Sofia Holmgren and the literature historian Hilma Borelius among others belonged to a more middle-class phalanx that was in conflict with the movement’s more radical elements. This is probably the explanation for why Sofia Holmgren on a couple of occasions actively opposed Anna Bugge Wicksell as a representative of the movement at international congresses. The official argument was however that Sofia Holmgren found it unsuitable that Sweden should be represented by a Norwegian citizen. After Sofia Holmgren retired in 1934, she first moved back to Malmö but spent her last years in Hörby, where she died in 1953, at almost 90 years of age. She is also buried there. 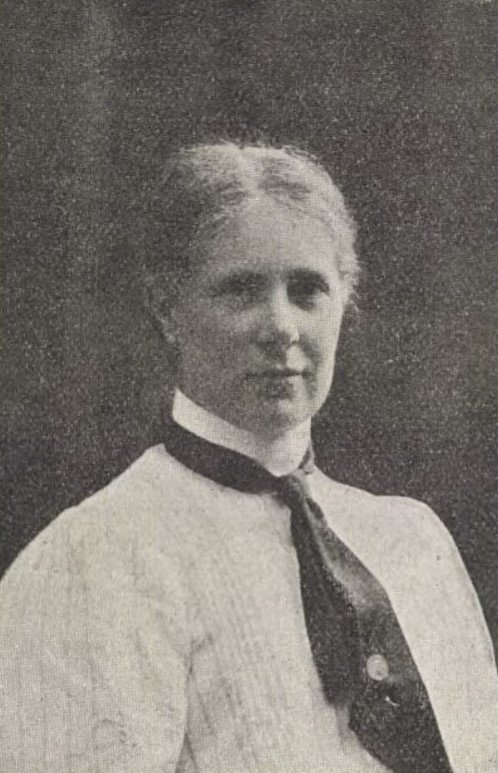