Sofia Magdalena of Denmark was born at Christiansborg castle in Copenhagen in 1746. She was the daughter of the Danish king, Fredrik V, and his first wife Louise of England. When Sofia Magdalena was five years old her mother died in childbirth. Sofia Magdalena was then – along with her three youngest siblings Wilhelmine Karoline, Kristian (later King Christian VII), and Louise – raised primarily by her paternal grandmother, the dowager queen Sofia Magdalena of Denmark. Sofia Magdalena’s childhood was marked by the pietistic religious movement, supported by the dowager queen, as well as her father King Fredrik V’s evident alcoholism and dissolute life. The education she received was appropriate to the rules which were the norm for young princesses of European Lutheran courts: there was a strong emphasis on languages, history, geography, catechism, and music. Sofia Magdalena, like her siblings, was musical and well-trained in the dance culture of her time.

At the time of Sofia Magdalena’s birth the political powers of Denmark and Sweden had already begun considering a marriage between the Danish princess and the similarly aged Swedish Crown Prince Gustav (later King Gustav III). The two children’s engagement was sealed in 1751 when they were both only five years old. Given the strong rivalry between the Danish and Swedish royal houses of Oldenburg and Gottorp-Holstein this marriage was not viewed favourably. However, the wedding took place in 1766 and Sofia Magdalena made a ceremonial entrance into Stockholm, where the ceremony was performed at Slottskyrkan (the castle church), followed by a banquet in Rikssalen within Stockholm castle itself. Sofia Magdalena’s dowry provides a good insight into the royal consumption of jewels, elegant clothing, and refined household items of the 1700s as well as into the intellectual aspect in the form of a complete library containing both classical and modern literature.

The marriage was a somewhat unhappy one given the significant differences in the couple’s characters. Sofia Magdalena was a reserved person who enjoyed intimate social occasions and sought to make life-long friendships. Her complicated position as a Dane at the Swedish royal court probably strengthened people’s impressions of her as stiff and shy. At the same time she was well-trained at the magnificent courtly representation duties which King Gustav III came increasingly to demand and she was constantly at her husband’s side during celebrations, ceremonies, theatre attendances, and other entertainments. The couple’s greatest trouble was their mutual inability to develop a sexual relationship. It was not until 1775, and then only after tangible interference by Crown Equerry Adolf Fredrik Munck, that the couple achieved this. The matter was of great public interest given the lack of a successor to the Swedish throne. Munck made his own account of his involvement in bringing the royal couple together in a written statement conserved within Riksarkivet (the national archives). Following his efforts the couple were openly warmer and more respectful to each other and in 1778 their eldest son Gustav Adolf (later King Gustav IV Adolf) was born. Their second son, Karl Gustav, was born in 1782 but died the very next year. The sorrow this caused both parents contributed to a rift between them which never properly healed.

Sofia Magdalena’s position as queen of Sweden changed and strengthened following the birth of her first son. Despite leading an increasingly separate life from her husband she developed greater independence in running her royal household and surrounded herself with friends who shared her interests. Sofia Magdalena’s continually expanding library testifies to her own continuous studies, primarily within the spheres of languages and natural sciences. She also actively engaged in comprehensive charitable activities although she never sought to promote herself by highlighting these efforts.

Following the death of King Gustav III Sofia Magdalena came to focus on protecting her son’s interest as heir-apparent to the Swedish throne. This proved to be an onerous task in the face of the minority government which was established by her brother-in-law Duke Karl (later King Karl XIII). Gustav IV Adolf’s accession to the throne and his subsequent marriage to Fredrika Dorothea Wilhelmina of Baden led to a few years of happy family life. Sofia Magdalena, now dowager queen, continued to run her own life with her characteristically independent nature. Some examples of this are the extensive new refurbishments of Ulriksdal castle, which served as her summer residence, as well as at Stockholm castle, which was decorated by the artist Louis Mareliez.

The complicated political situation within Europe during Napoleonic times had long-lasting effects on the Swedish royal family. Gustav IV Adolf’s abdication and flight into exile in 1809 served as yet another blow to Sofia Magdalena, both privately and publicly with regard to her position as dowager queen. Until her dying day – and even after the introduction of a new royal dynasty into Sweden – she tried to strengthen her son’s complicated position through her comprehensive correspondence. Mother and son never saw each other again. Sofia Magdalena died aged 77 at Ulriksdal castle surrounded by her closest friends and was then buried in the Gustavian funerary crypt in the Riddarholmen church in Stockholm. 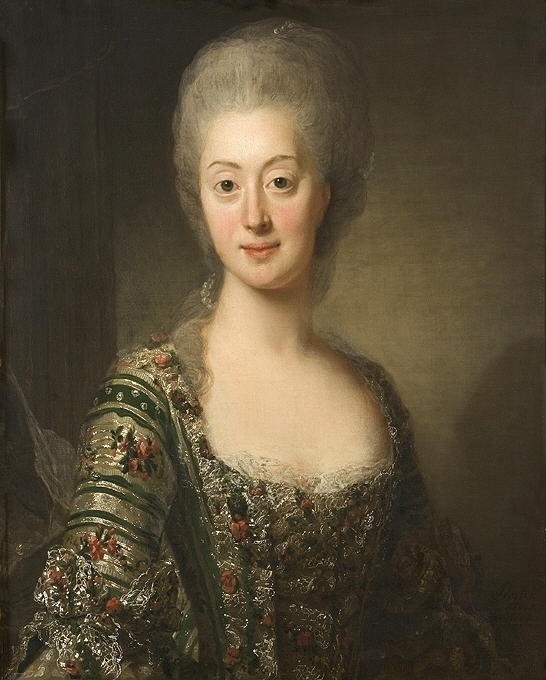