Sophie Adlersparre was a pioneer within the Swedish bourgeois women’s movement and was one of the instigators behind Tidskrift för hemmet, the first women’s journal in the Nordic countries.

Baroness Sophie Adlersperre was born in 1823 and grew up on the Helgerum estate in southern Tjust in Kalmar county. She spent her first 13 years there with her mother Sophie, her father Eric, and three siblings – of whom Eric was two years her senior, whilst Axel and Amelie were younger than her – as well as servants and a tutor. She was homeschooled in various subjects including English, German, and French. Life as a member of the nobility also entailed an appreciation of music, classical literature, and maintaining correspondence. Sophie Adlersparre learned to play the piano and to embroider when young. Her father was a retired lieutenant colonel. Although he ran a papermill and a distillery, the family nevertheless faced serious financial problems.

In the autumn of 1836, when Sophie was 13 years old, her father suffered financial ruin. The family property was sold and they moved to Stockholm to live in an apartment on Regeringsgatan 11. Sophie Adlersparre attended Augusta Bjurström’s girls’ school for two years. Refurbishment of her father’s parental home Manhem was finally finished by 1841 and the family relocated there. Sigrid Leijonhufvud makes a brief reference to the period at Manhem in her biography of her aunt, describing how they enjoyed a rich social life which was very musical but also bore “an undertone of unsatisfied spiritual needs”.

Sophie Adlersparre’s father died in 1848. When she was 25 years old she, her mother, and her younger sister moved back to Regeringsgatan 11 in Stockholm and a new phase of her life began. Stockholm offered a rich cultural and social life, and she made new friends, but also suffered great sorrow. She lost her sister to typhoid in 1849. In addition to this personal loss, she and her mother also fell into financial difficulties. Sophie Adlersparre was forced to provide for the two of them through the only types of activities which were deemed suitable for noblewomen at the time: giving piano lessons, providing white embroidery, and eventually translating English novels.

Sophie Adlersparre was an intellectual. It quickly became obvious that she preferred working with a pen rather than a needle. In the early 1850s she visited Malla Silfverstolpe’s literary salon in Uppsala, meeting several authors and literary people, including Thekla Knös. She was able to put her contact network to good use in 1858 when she decided to set up a journal. She launched the idea anonymously at the turn of the year 1858-1859 through an article in the conservative Svenska tidningen: Dagligt Allehanda i Stockholm which she signed off as “Din redliga vän K” (“your honest friend K”). She advocated on behalf of a journal “published by Swedish women for Swedish women, with the delightful goal to constantly inform and provide enlightenment, to ennoble and be noble, to please and be pleased”, and it was to “become a type of preparatory course required to allow Swedish women to become independent in thought, so that they could then become independent in action”. The message was clear. The intention was to establish a journal intended to improve women’s education at a time when women were subordinate.

Sophie Adlersparre had become acquainted with Rosalie Olivecrona, a similarly aged well-travelled noblewoman, at the turn of the year 1855-1856. Olivecrona had spent several years travelling and working as a teacher in America and had published her own poetry. She was a linguist, literarily accomplished, and defended Fredrika Bremer’s controversial novel Hertha, eller en själshistoria in Aftonbladet in 1856. Sophie Adlersparre and Rosalie Olivecrona became very good friends. From their frequent correspondence it is clear that Rosalie Olivecrona was supportive of the article which had appeared in Svenska tidningen: Dagligt Allehanda i Stockholm. Sophie Adlersparre was intriguingly duplicitous when planning her new journal together with her friend as she never revealed that she in fact was “your honest friend K”. In a long letter dated February 1859 she writes about “the burning question’’, that is the journal that they had enthusiastically worked on for over a year, and the question whether they should remain anonymous or not as well as the question how to cover the printing costs. They decided to keep their identities secret, wrote an application, invested money and obtained a typesetter, a printing machine and subscribers. The first edition of Tidskrift för hemmet, tillegnad den svenska qvinnan was published in June 1859. At that time this was a unique journal, being the first women’s journal in any of the Nordic countries. It was also the forerunner to a unique, lengthy, and unbroken tradition of bourgeois women’s journals in Sweden.

Sophie Adlersparre and Rosalie Olivecrona were the editors of Tidskrift för hemmet. They ran their editorial office from home for eight years. They travelled abroad together and visited the editorial office of the English journal English Woman’s Journal in London in 1861. Initially they were influenced by the Revue de deux mondes and Household Words journals. Following years of hard work and efforts, in terms of both input and dealing with various issues, Sophie Adlersparre took sole control in 1867. She remained the only editor until 1884 when the journal changed its name to Dagny and became an organ of the Fredrika Bremer Association.

Tidskrift för hemmet contained articles on literature, women’s issues, educational matters, religion, the sciences, biographies, fiction, translations of other articles on foreign authors and matters of contention, as well as light-hearted material. Many of the journal contributors were high-profile people of the era, including Fredrika Bremer, Eva Fryxell, Thekla Knös and Jenny Rossander. Sophie Adlersparre also submitted a lot of material to the journal through the years, both anonymously and using a series of different pseudonyms and aliases, Esselde being the most common. Her most significant contributions were those on literature and literary reviews. During the journal’s initial phase, 1859–1867, its trademark was informative articles on non-fictional literature, whilst the second period, 1868–1877, saw an increase in fictional content, in particular on tendentious literature and children’s literature. From 1878 to 1885 the journal changed its focus and became dedicated to Nordic women and at this point content focused on fiction and new Swedish drama. Sophie Adlersparre travelled the Nordic countries in her guise as editor, meeting Camilla Collett, Magdalene Thoresen, and Mathilde Fibiger, amongst others. These Scandinavian connections gave rise to new subscribers and new material from Danish and Norwegian authors and writers.

Sophie Adlersparre married Axel Adlersparre in 1869. He was a commander and a member of the second chamber of parliament. She became step-mother to five children, and was left a widow in 1879. Throughout this time she continued working with the journal and actively took on various other projects. One of the early mottos of Tidskrift för hemmet was “women need jobs, and jobs need women”. In 1862 she set up Sunday schools and evening schools for the working-class daughters of Stockholm, and the next year she opened an editing office. Sophie Adlersparre was keenly interested in matters involving healthcare and was involved in 1864 in the establishment of Föreningen för frivillig vård av sårade och sjuka i fält (“association for voluntary care of wounded and ill soldiers”) which later became Röda Korset (Red Cross). She enthusiastically advocated the notion of forming an international branch.

Sophie Adlersparre was also a founder of Handarbetets Vänner (Friends of Handicrafts) in 1874 and persuaded Hanna Winge, Molly Rothlieb, Anna Fleetwood, Hanna Lindberg, Fredrika Limnell, and Ellen Ankarsvärd to support her. Sophie Adlersparre was chair of the association for developing and raising the artistic level of women’s handicrafts from 1874–1887. Tidskrift för hemmet included appendices with patterns and reports on various World’s Fairs in which craftswomen had exhibited. Sophie Adlersparre joined Hilda Caseli in the so-called Flickskolekommittén (“girls’ school commission”) from 1885 to 1886, which was the first commission to include female members.

Sophie Adlersparre was a pioneer of women’s movements and education. A network arose in Stockholm aimed at improving conditions for women. In retrospect the need for an organised national forum for women’s issues became apparent. Sophie Adlersparre founded the Fredrika Bremer Association, established in December 1884, which intended “to work towards a healthy and steady development of women’s employment opportunities through the energetic collaboration of experienced women and men, within as wide a circle as possible, in order to provide them with moral and intellectual, as well as social and financial, improvements”. The association, viewed as bourgeois, aimed to work in the spirit of Bremer on behalf of “real emancipation”. Its programme resembled the aims of Tidskrift för hemmet and Sophie Adlersparre’s influence was significant. The mouthpiece of the Fredrika Bremer Association, Dagny, became the successor to Tidskrift för hemmet. Initially Sophie Adlersparre served as the editor of Dagny’s editor, and was responsible for its agenda and the serious attention literature received within it.

Sophie Adlersparre supported many female writers during the early stages of their careers, such as Ellen Key, who wrote for Tidskrift för hemmet, and Selma Lagerlöf, whose sonnets were published in Dagny. Sophie Adlersparre encouraged Selma Lagerlöf and gave her financial support to complete Gösta Berlings saga after Lagerlöf had been awarded Idun’s prize for the first part. She also hosted Victoria Benedictsson in her own home. During the 1880s she fell into a dispute with not only young male radicals like August Strindberg, but also older more conservative men such as Carl David af Wirsén. When Alma Åkermark’s journal Framåt – active 1886–1889 – published a short story written by the young female writer Stella Kleve and titled “Pyrrhussegrar” in 1886, Sophie Adlersparre responded by submitting an op-ed article to Dagny. She was opposed to new ideas about “free love”, which she believed would not be of benefit to women.

In her final years Sophie Adlersparre planned to write the history of the journal given that, as she wrote in a letter to Rosalie Olivecrona in 1885, “they no longer understand us”, “we are too old, we have been weighed and found to be lacking by modern realism, on the one hand, and by reactionary evangelism, on the other”.

Sophie Adlersparre was awarded the Illis quorum meruere labores medal in 1885. She died in 1895 and is buried at Galärvarvskyrkogården in Stockholm. 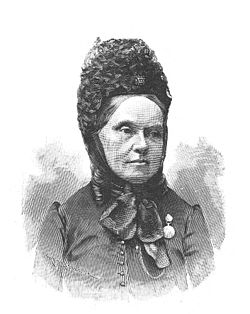