Thyra Bratt was a right-wing politician and city council member in Stockholm. In her career in banking, she was engaged in the issue of equal pay for women.

Thyra Bratt was born in 1902 in Stockholm. Her father, Oscar Andersson, was an estate agent and her mother was Gerda Andersson, née Friberg. Thyra Bratt attended a seven-year girls’ school. When she had just turned twenty, the family lost their great fortune, and she had to help with earning their livings.

“Unfortunately I cannot type but I am very interested in the bank’s other administrative assignments and I shall do my best to learn to handle them”. Those were Thyra Bratt’s introductory words when she applied for and was given a post at Skandinaviska Banken (later Skandinaviska Enskilda Banken, SEB). She was employed in the “Coupon section”, that cut out dividend coupons when dividends were handed out.

Thyra Bratt realised that if she became the bank’s best and fastest typist, she would be able to make a career. The coupon section, with both a male and female work force, was on the other hand a world in which the least of the bank clerks came in daily contact with the stuff that created great fortunes. At Skandinaviska Banken, she met Gert Bratt. They were married in 1928, when the bank first allowed women employed there to be married. They had three children.

Despite Thyra Bratt’s work being just as good and just as difficult as that of the young men in her section, she learned that her salary was considerably lower. This inspired her to start working to attain the same salary for the same work, even for women, and that engagement lasted all her life, paving the way to union work in Bankmannaförbundet. In 1942–1955, she was a board member of Svenska Bankmannaförbundet (now Finansförbundet) and vice chairperson of the Stockholm section.

She ended her career at Skandinaviska Banken as a chief accountant at the branch in Erik Dahlbergsgatan in 1958. According to the contract at that time, women were to retire at 55 years of age. Thyra Bratt was however offered a post at Sveriges Kreditbank as the head and chief accountant of the deposits section at the main office at Norrmalmstorg. She worked there until she retired in 1967.

In 1958–1973, Thyra Bratt was a member of the Stockholm city council. She focused her visionary contributions on Stockholm’s environment and nature. She was knowledgeable, well-read, forceful and happy to work across party boundaries. Energy and ideas were taken from her many assignments in animal protection and foodstuffs management. Four or five examples of her political contributions are given below.

Firstly, in 1961, city councillor Helge Berglund permitted unpurified sludge to be tipped into the Baltic Sea. Newspaper headlines recounted that he brushed his teeth in the sludge-contaminated water to show that it was harmless. Only Thyra Bratt and the communist/left-wing politician and physician John Takman opposed the scheme in the city council. They were scoffed at but their efforts resulted in the cessation of the sludge-tipping.

Secondly, to make it easier for large cruise ships to reach Stockholm’s inner harbour more easily, plans were made to blast a sea-lane north of Sandhamn. Thyra Bratt explained that the region was important for local leisure activities at sea. The blasting would also affect marine plants and spawning places for fish for a considerable time. The blasting was stopped, but the issue has later been brought up again several times.

Thyra Bratt’s third contribution was to get involved in the conservation of old cultural heritage buildings. In 1962, city councillor Joakim Garpe, a Social Democrat, wanted to tear down “old disgusting Strandvägen”. The symmetrical buildings had stood there ever since 1862–1897. In 1968, Thyra Bratt did not succeed in saving the Strindbergshuset at Karlaplan, however, nor the beautiful Sagerska building in Hamngatan, despite her cooperation on this matter with the author Per Anders Fogelström.

The fourth issue was the highway planned in the 1960s – Österleden – to pass under southern Djurgården among other places, and with tall ventilation towers. Thyra Bratt’s argument against Österleden was that Stockholm’s situation on a peninsula made it impossible to build an off-loading ring road eastwards. Such a road would increase habitations in the world’s largest archipelago and the most important nature area in Stockholm. The traffic through Stockholm City must be off-loaded to the north, west and south. The result was that no tunnel under Djurgården was constructed.

Yet another environmental issue came up in 1966, when Thyra Bratt was opposed to the fluoridisation of the Stockholm drinking water. She later received support from scientists. Like the enthusiast she was, Thyra Bratt continued to struggle for important municipal issues even after she left the city council. She agreed to be a columnist in the local Stockholm newspaper Östermalmsnytt. Under the heading ”Nytt från Stadshuset” she propagated for her favourite topics, now as a member of the “third state power”. At the beginning of the 1980s, she led the campaign to save the inner city emergency hospitals, as the campaign vice-chairperson. Both Sankt Göran and Sankt Erik hospitals remained open.

Thyra Bratt died in 1994. She lies buried in the Sandsborg Cemetery in Stockholm. 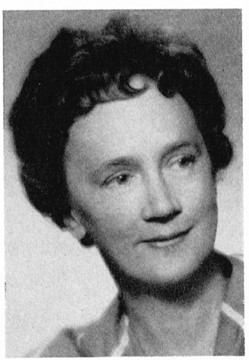