Tollie Zellman was one of the greatest comedians to tread the boards in Sweden during the first half of the twentieth century.

Tollie Zellman was born in Norrmalm, Stockholm in 1887. She was the daughter of Carl Magnus Zellman, a decorative- and church painter, and his wife Betty. Seven years later her little sister Signe was born. Her father initially sent Tollie Zellman to the Åhlin school and, after the family moved to Nyköping, she then completed her schooling at the local girls’ school. Tollie Zellman has described herself as the class clown and she was known as “the Comedian” by her classmates. As a young girl and office worker at the salary offices of Nordiska Kompaniet in Nyköping she nurtured secret dreams of becoming a stage actor. Her parents did not share her enthusiasm about her giving up her job in order to apply to work at the theatre. They neither supported nor recognised her theatrical debut at the age of 19. Tollie Zellman’s first stage appearance occurred in 1906 when she played the part of Signe in the play Solitar at the Örnsköldsvik theatre. Although her baptismal name was Victoria she now became known as Tollie, a nickname one of her paternal uncles had given her when she was a child.

Tollie Zellman joined the Alfred Lundberg company and toured with them. However, in 1908 she gave up the touring life and left the company. She had discovered that she was pregnant and in March 1908 she gave birth to her daughter, who later became an actor in her own right, named Lill-Tollie Zellman. The name of her daughter’s father was never revealed. Initially, due to the broken relationship between Tollie Zellman and her parents, she fostered out her daughter. This relationship was, however, reinstated a few years later. Tollie Zellman gained employment with the August Bodén operetta company and headed to Helsinki with them in an effort to provide for herself and her child.

During the early years of her acting career, before she unwillingly ended up stuck in the world of comedy, Tollie Zellman performed a variety of different roles, including character portrayals within Strindberg plays such as Kronbruden and Fadren. Further, she also studied theatrical acting in Paris and during the late 1920s she also directed at Svenska Teatern in Helsinki, as well as at a number of other Swedish theatres. She also appeared in several operettas at the Oscar theatre during Gustaf Wally’s era, including Blåjackor in 1942. In principle she worked at almost every Swedish theatre throughout her career.

It was in 1911, playing the role of Jenny in the popular play 33,333 that Tollie Zellman made her public breakthrough at the Folk theatre. Her greatest success on both the stage and on the radio was her portrayal of Mrs. Dulcie Baxter in the comedy Mollusken. Her other stage successes include the role of the dean’s widow, Julia Hylténius, in Hans nåds testamente as well as the plays Nu kommer Madame, Dulcie, and her portrayal of the Countess Sangiorgi in the farce Otrogen.

As an actor Tollie Zellman exuded a lot of charm and humour, as well as a great depth which she displayed when portraying more dramatic roles, both on stage and on the silver screen. She had her own distinct acting style which can be described as aristocratic. She was somewhat of a prima donna both on and off stage. She became famous for her unique drawl which was neither affected nor put-on. By putting the wrong emphasis on words and through an idiosyncratic use of pauses she was never boring or predictable. Tollie Zellman’s delivery could make a tame reply seem cheeky, ironic, or funny. Her fellow actor Hjördis Petterson wrote in her memoires that Tollie Zellman would deliver “one syllable every minute”.

Tollie Zellman appeared in about 50 films over the course of her 50-year career. Her film debut came in 1906 in Lika mot lika, which was one of the first Swedish moving pictures. Unfortunately there is no surviving copy of it. Some of her best portrayals on film are as Nanny Högfeldt in the 1938 film Karriär, the patient Lily smith in 1943’s Jag dräpte, as well as the alcoholic former theatrical star Cora Anker in Medan porten var stängd, from 1946. She was awarded a Charlie for the latter. Her other film appearances include Görel in Per Lindberg’s 1923 film adaptation of Elin Wägner’s Norrtullsligan, Mrs Pontus in Vi som går köksvägen, from 1932, Bobergskan in the 1934 Anderssonskans Kalle, and Amalia Blomkvist the fish vendor in Munkbrogreven, from 1935, in which Ingrid Bergman made her debut performance.

Tollie Zellman played refined upper-class ladies who displayed an iron will, charisma, and were often somewhat seductive in appearance in films such as Stackars Ferdinand and Fröken Vildkatt, both from 1941, Blåjackor and Idel ädel adel, both from 1945. In the 1936 film Kungen kommer Tollie Zellman played the part of Sophie Strååk, the prima donna in a travelling acting troupe during the 1860s. In the aforenoted Schamyl Bauman film, Karriär, Tollie Zellman also played an actor of a travelling theatrical troupe who suffers from nerves and drinks too much, a little too often.

Tollie Zellman’s best film role was as Cora Anker, the redundant star of the stage in Medan porten var stängd, who is fortifying herself in advance of meeting up with her former theatrical director in a last desperate attempt to make a comeback on the stage. The critics hailed her portrayal, one of them stating, for example, that it was “a complete masterpiece, an eerie spot-on study of human decline”. It is well known that the manuscript writer and director Hasse Ekman, who had known Tollie Zellman since she was a young child, had borrowed some of her traits when he wrote the part of Cora Anker as a tragic and abandoned theatre star. Tollie Zellman’s probably flakiest female character portrayal was in the 1948 crazy comedy called Lilla Märta kommer tillbaka in which, amongst other things, she misplaces gunpowder in the most remarkable places, resulting in extraordinary surprises for the rest of her family.

Tollie Zellman has been described as an original and colourful frisky vamp, like a kind of Swedish Mae West, but nevertheless entirely unique and inimitable. She often played voluptuous and flaky aristocratic women or fickle prima donnas, both on stage and on the silver screen, and she put a personal stamp and flavour on every role and every stage she performed on.

Tollie Zellman married the consul Viggo Berck in 1916, but they separated after just one year together and their marriage was dissolved. Her second marriage, to Carl Holmquist an accountant, lasted a bit longer, from 1918 until 1923.

Tollie Zellman died in Stockholm in 1964. She is buried at Norra begravningsplatsen (The Northern Cemetery) in Solna. 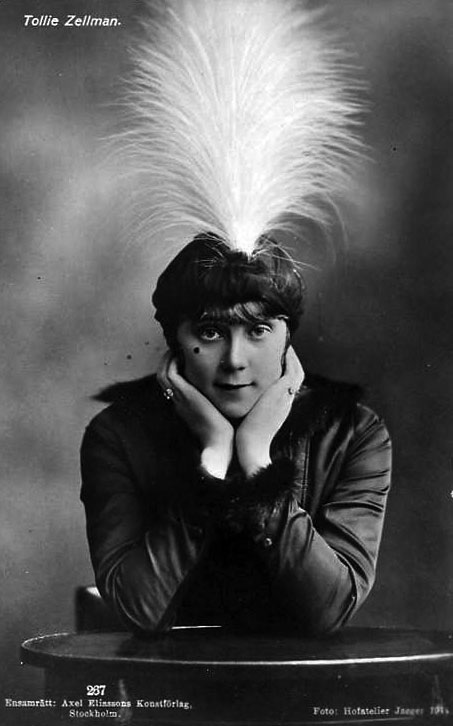