Tutta Rolf was a Norwegian-Swedish actor and singer.

Tutta Rolf was born in Kristiania (now Oslo), Norway in 1907. She was one of the first of many Norwegian actors who came to settle in Sweden. She is thus largely seen as a Swedish actor and singer, particularly with regard to her work in revue shows and films.

Tutta Rolf, who was self-taught, made her debut in 1925 at Mayolteatern in Oslo. She had great success in 1927 when she appeared on Casino in an operetta called Geishan. Tutta Rolf was discovered by Ernst Rolf when he was in Oslo in 1928 where he produced a revue show at Casino. They went out on tour together and in 1928 Tutta Rolf made her Swedish debut in Stockholm. The couple got married that same year and their son was born in 1931. After they got married Tutta Rolf appeared in Ernst Rolf’s revue shows both in Gothenburg and in Stockholm. She continued to appear in a range of revue shows after his death in 1932, including those of Karl Gerhard and Kar de Mumma.

Tutta Rolf’s work on the stage comprised both operetta roles and dramatic parts, such as the part of Ophelia to Gösta Ekman’s Hamlet in 1934. Tutta Rolf’s film career began in 1932 when she made her silver-screen debut in Kärlek och kassabrist. During the 1930s she went on to appear in 14 films, 8 of which were directed by Olof Molander. Her big cinematic breakthrough came through Vi som går köksvägen, adapted from the Norwegian novel written by Sigrid Boo. Her ensuing films include the 1935 Swedenhielms, Sara lär sig folkvett from 1937, and the 1938 film Dollar. Tutta Rolf’s silver-screen characters were viewed as portrayals of the modern female ideal.

Towards the mid-1930s Tutta Rolf married for a second time. Her new husband was the choreographer and director Jack Donohue. She then settled in the USA for a few years and appeared in a few American films. Her daughter Jill Frances was born in 1940. Tutta Rolf divorced Jack Donohue in 1950 and then returned to Sweden.

Tutta Rolf married for a third time in 1953, to Hans Gösta ‘Hasse’ Ekman. Her final Swedish appearance was on his TV-programme in 1963. The show was called Hatten eller Trollkarlens melodier. The couple then went to live in Spain. In 1974 they got divorced and Tutta Rolf subsequently moved to the USA again.

Apart from her work on the stage and screen Tutta Rolf is primarily known for having recorded several songs. The two best known of these are probably “En stilla flirt” from the eponymous film and “Nu ska vi opp, opp, opp”, both songs written by Jules Sylvain. Tutta Rolf was also known for her renditions of “Det är den stora, stora kärleken” and “Gör någonting”. 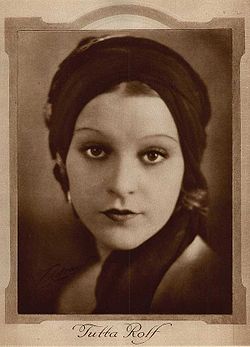