Ulla Sjöblom was an actor and a singer whose ambition was to reach out to the wider public through her art.

Ulla Sjöblom was born in Stockholm in 1927. She gained her school-leaving certificate in 1947 from Högre allmänna läroverket för flickor (advanced general school for girls) in Norrmalm. She then held an internship at Helsingborgs stadsteater (city theatre) from 1948–1950. The current manager of the theatre at the time, Lars-Levi Læstadius, encouraged her to apply to the Dramaten theatre school in Stockholm, at which she was a student from 1950–1953. As an actor she was tied to the Dramaten theatre during several periods: 1953–1956, 1965–1968, and 1974–1983. In the intervening periods she was associated with Göteborgs stadsteater from 1957–1959 and 1962–1965. She was also connected to Malmö Stadsteater from 1961–1962, and with Riksteatern from 1968–1970. Further to this, she was often employed by the TV-theatre for which she recorded performances of classic plays and played the part of Toinette in Molière’s Den inbillade sjuke in 1959, the title role in Sophocles’ Antigone in 1960, the old woman in Ionesco’s Stolarna in 1962, and Maria in Hans Dahlin’s dramatization of Shakespeare’s Twelfth Night, in a 1967 performance which included Bibi Andersson, Toivo Pawlo, Carl-Gustaf Lindstedt, and Per Oscarsson, amongst others.

Ulla Sjöblom had already appeared in several performances at the national theatre whilst she was still a student. One of the first roles she performed during her earliest period at the Dramaten theatre in 1954 was as the student in Ionesco’s absurd play Lektionen. Upon her first return to Dramaten in 1965 after being away she gave an impressive performance of the lead role in Gombrowicz’s Yvonne, another absurd play. She was awarded the Thalia prize by Svenska Dagbladet for this role. Towards the end of the 1970s she again returned to Dramaten to play Cleopatra in Shakespeare’s Antony and Cleopatra in 1975, Farinelli in Sven Delblanc’s play Kastrater in 1977 – for which she was awarded the Dramaten’s O’Neill stipend – and as Ada Nilsson in Alf Sjöberg’s dramatization of Agneta Pleijel’s Kollontaj, in which Margaretha Krook played Alexandra Kollontaj.

However, it was during her time at Göteborgs stadsteater that Ulla Sjöblom’s performances revealed her true qualities and versatility as an actor. She appeared in plays such as Lars Forssell’s and Pär Rådström’s 1958 cabaret Två åsnor, G. B. Shaw’s Candida in 1958, Brecht’s Den goda människan i Sezuan in 1962, the 1964 musical Teenage love, and Ibsen’s Vildanden in 1965. During her Malmö stint she played Sonja in Tjechov’s Onkel Vanja in 1962, and while at Riksteatern she performed the lead role in Brecht’s Mutter Courage in 1970. The vocal problems she developed in conjunction with the latter production caused Ulla Sjöblom to alter her previous vocal and movement techniques and become more of a method-actor, and eventually she developed into a leading instructor.

Ulla Sjöblom had already started teaching during the 1950s at the Göteborgs stadsteater school. Her teaching activities really took off when she became associated with Stockholms Scenskola (acting school) in the 1970s. Teaching put her in touch with a group of students who, under the guidance of Peter Oskarson, established Skånska Teatern in Landskrona which she then joined. She shared that group’s interest in folk theatre and appeared in productions of Lars Forssell’s Haren och vråken and Brecht’s Modern, both in 1978. She was active both as an instructor and as an actor during the 1983–1986 period as part of the newly-established Folkteatern in Gävle, where Peter Oskarson was the artistic director.

Ulla Sjöblom’s teaching style was an extension of the teaching methods developed by the German Rudolf Penka. She also counted the director Alf Sjöberg as one of her mentors, and appeared (further to the aforenoted productions) in his last TV-recording, which was of Molière’s Hustruskolan in 1980. In Ulla Sjöblom’s eyes Brecht was much more than just a playwright whose plays she often performed: she largely shared his ideology and his aesthetic ideals, believing that the theatre should be a socially transformative force which could both entertain and enlighten. Actors should be both expressive and analytical, including fundamental textual analysis and an experimental approach to “treading the boards”.

Throughout her career Ulla Sjöblom alternated between the theatre, the TV, and the silver screen. She appeared in about 20 films, including her 1953 portrayal of the unhappy daughter of a doorman who commits suicide in Kvinnohuset, a performance as Clara in Arne Mattsonn’s film adaptation of Hemsöborna in 1955, the wife of the head of police in Ingmar Bergman’s Ansiktet in 1958, the amusement-park attendant Olivia in Jan Troell’s Här har du ditt liv in 1966, and as Sally who runs a brothel in Jan Halldoff’s Rötmånad in 1970. Whether playing a minor or more demanding role, she always injected a personal and genuine element into her performances.

Ulla Sjöblom also became well-known to the broader public as a cabaret-singer. She performed Boris Vian’s protest song Le Déserteur (translated by Lars Forssell as Jag står här på ett torg) in the 1955 radio programme Puzzlet. Indeed, Forssell’s and Pär Rådström’s Cabaret två åsnor at Göteborgs stadsteater hinged on Ulla Sjöblom, who sang Leo Ferrés’ song Säg vad ni vill and De fattigas piano as expressions of darkness, anger and sadness. It was through her now classic, extremely expressive, rich and inimitable performance of Forssell’s Swedish versions of French chansons that a wider Swedish audience became aware of Forssell the poet. Ulla Sjöblom recorded these chansons as singles in 1956, 1958, and 1964, accompanied by Gunnar Svensson’s and Erik Johansson’s bands. Uno Myggan Ericson also translated French and German songs by Kurt Tucholsky, amongst others, into Swedish which were then performed by Ulla Sjöblom in the 1960 radio cabaret Cabaret Ulla. She also appeared in several early TV-cabaret shows such as Kabaret Maskrosen in 1957, Vattenkonster in 1959, and I Arlanda stad in 1960.

Two decades after the Forssell period Ulla Sjöblom recorded an album with Gunnar Edander’s music put to texts by Sonja Åkesson called Sonjas sånger. This was an album which in Calle Pauli’s words dealt with “alcoholism, suburban depression, and an ice-cold loneliness but was primarily about comfort and sympathy.” Ulla Sjöblom rarely performed songs publicly but they can still be heard on these records.

Ulla Sjöblom died in 1989. Her remains lie in the memorial garden at the Galärvarv cemetery in Stockholm. 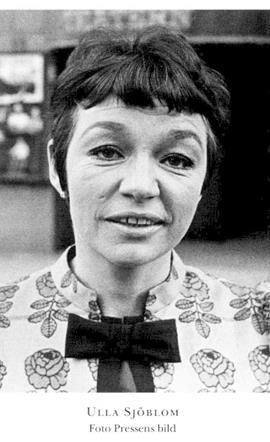