Ulrika Lindholm was a Swedish ballad singer and transmitter of tradition, noted for her extensive repertoire of folksongs. With Svea Jansson from the Åbo archipelago and Lena Larsson from Ytterby outside Kungälv, she stands forth as one of Sweden’s three greatest female singers of popular ballads and folksongs.

Ulrika Lindholm was born in 1886 in Raukasjö, a distant mountain hamlet in Frostviken parish in northernmost Jämtland. She was the sixth child of the mountain farmer Fredrik Andersson’s large family of altogether nine children. He was a widower with four children who was thereafter married to Sofia Charlotta Eriksdotter, the daughter of a pioneer settler from Stornäset in southern Lappland, who already had one son, Levi. They had four more children together. The paternal grandparents Anders Larsson and Olava Fredriksdotter also lived on the farm and were the first settlers in Raukasjö. They also had a farmhand and a maid living there all year round.

The hamlet of Raukasjö consisted only of two farms and a leased smallholding, but the farm was still large considered as a mountain establishment. It was situated on the trail running from Norway through Frostviken to Vilhelmina and was a natural overnight stop for travellers as it was for visiting Sami in the spring and autumn. Songs and music were part of daily life. Almost every evening, Fredrik Andersson played his fiddle and as soon as there were visitors, old and young danced together in the big room. Sometimes, on festive occasions, they went through the entire repertoire and then the children had to listen carefully so they were able to sing properly and not modernise the melodies or make them more difficult. When the revival movement reached Raukasjö, all the old song books were burnt and all broadside ballads were replaced by collections of religious songs, but Ulrika Lindholm stated much later in an interview that ”all the grown-ups on the farm liked singing and music and they all had good memories – so the children learned the old songs anyway”.

Ulrika Lindholm moved away from home when she was 21 and first had a job at the home of her elder half-brother Levi Johansson, an elementary schoolteacher living in Hammerdal. The temperance lodges were a central meeting point where people gathered, sang, played dance games, and listened to new songs. It was also via the Godtemplarorden (IOGT) that she got to know her future husband, the local shopowner Jöns Lindholm, and the couple married in 1909. Prematurely, however, in 1915 when Ulrika was 28 and expecting their first child, she was widowed.

After her husband’s death, Ulrika Lindholm remained in Oviken and continued working in their shop until 1917. After that she had positions in households in several different places in the country before having the opportunity in 1922 of taking over a country store in Amsberg just outside Borlänge. However, then the Coop arrived in the village, and she had to sell. She made one further attempt to take over a country store before finally moving in the 1930s to Enskede just south of Stockholm, where she settled down for good.

When Ulrika Lindholm moved to Enskede, she found a new use for her knowledge of old culture and traditions. She had of course always sung, but now she also became a source of information for Nordiska museet. From 1940 onwards she answered over sixty lists of questions on varying subjects.

When the Radio service of that time in cooperation with a number of scientific institutions started a folk song competition in 1948–1949, Ulrika Lindholm sent in a contribution. The competition was later followed up by radio recordings. The first opportunity came in 1952 when Matts Arnberg recorded a selection of her songs for the Swedish Radio. The recordings took place in a studio in Stockholm and were to be many. Most were made from 1958 and onwards. Ulrika Lindholm was then just over 70 years old but her voice was still strong and vital.

Ulrika Lindholm spent her last ten years at Stureby nursing home in Enskede. She died in 1977, at 91 years of age. 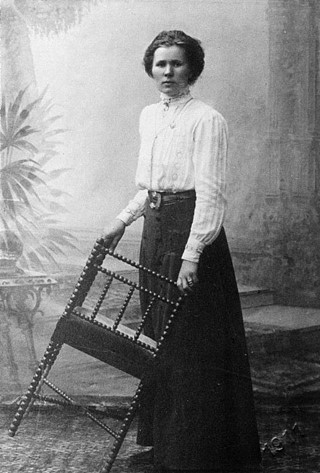