Valborg Werbeck-Svärdström was a Swedish singer who created ”Die Schule der Stimmenthüllung”, a school that included an anthroposophical understanding of the world and human beings, apart from physiological and methodological aspects.

Valborg Werbeck-Svärdström was born in Gävle in 1879. Both her parents, Maria and Carl Johan Svärdström, came from the region around Falun. Her mother was a seamstress and her father worked as a postman and later on as a tradesman. The family consisted of six children, of whom two boys died when very young. The remaining four were girls: Valborg, Olga, Sigrid and Astrid. Their parents were musical as were the four sisters, who later formed a vocal quartet that toured in Sweden and Europe.

Valborg Werbeck-Svärdström was the most gifted of the four. From morning to evening, she rambled around the countryside, singing. Her voice knew no bounds and she had no difficulties with her breathing technique. She could sing high A with ease and also fast coloratura melodies that were technically challenging. In 1890, the family moved to Djursholm in Stockholm, where Carl Johan Svärdström started his own shop. The girls all attended the Djursholm co-educational school: cultural personalities like Viktor Rydberg, Johan Bergman and Natanael Beskow all worked there, and the composer Alice Tegnér was the music teacher. She noticed Valborg Werbeck-Svärdström’s gift for singing and let her sing solos at school end-of-term ceremonies and small concerts in a church close by. The ethereally lovely song ”Gläns över sjö och strand” on a poem by Viktor Rydberg was originally composed by Alice Tegnér for Valborg Werbeck-Svärdström.

Her mother Maria Svärdström, who was her first singing teacher, was also skilled in natural medicine. This also became Valborg Werbeck-Svärdström’s great interest. She prepared herself for studying medicine by reading Latin and various medical texts. She became a vegetarian early on in life. Her parents founded Solhemmet, a health centre based on natural medicine near Norrköping.

Valborg Werbeck-Svärdström began her voice studies at the Royal Swedish Academy of Music (now Kungliga Musikhögskolan) in Stockholm in 1894. She was 15 years of age. The theosophist Ellen Bergman was her first teacher. Other teachers were Oscar Leijdström and Vendela Andersson-Sörensen. Later she was given lessons by the famous singer and teacher Signe Hebbe. Her debut as an opera singer at the Kungliga Operan in Stockholm took place in 1900. She had just turned 21 years old. Her debut was the title role in Ambroise Thomas’ opera Mignon. Two other main roles followed, in Mozart’s Le nozze di Figaro and Delibes’ Lakmé. She made her debut as a lieder singer in 1901 in the hall of the Kungliga Vetenskapsakademien, accompanied by Wilhelm Stenhammar.

Valborg Werbeck-Svärdström was employed by the Royal Opera in 1901 and she worked there for two periods until 1904. During her time there she sang the main roles in operas by Mozart, Gluck, Gounod, Donizetti, Tchaikovsky, Wagner, Weber, Mendelssohn and Rossini. She was awarded the Jenny Lind travelling scholarship in 1904 and continued her studies abroad, with Désirée Artôt in Paris, among others. She gave many concerts during this time. In the spring of 1905 she suffered paralysis of the vocal cords and was able neither to speak nor sing.

This crisis of the vocal cords, that lasted for two weeks, was to be decisive for her further development. She began the hard work of retraining her voice so that singing would not damage her vocal cords. During this crisis, she acquired profound knowledge of the realities for the human voice. Upon this knowledge she founded ”Die Schule der Stimmenthüllung” (Uncovering the Voice: The Cleansing Power of Song). Based on her own experience, she understood that the voice does not need any training; it is already there in everyone, but it needs to be uncovered. This was the cornerstone of her teaching and of her continued career.

Between 1906–1918, she conquered the opera stages and concert halls of Europe with an ever more extensive repertoire. She enjoyed singing Nordic music and thanks to her, many Nordic composers were introduced to the Central European audiences. She had Hugo Alfvén’s songs in her repertoire among others. In 1907–1908, she sang in 39 concerts in 43 European cities and in 1913–1914 in 13 countries. In 1907, the Svärdström sisters formed their quartet and that same year they toured in Germany, Hungary and Sweden, receiving very positive reviews. On the continent, she met her husband Louis Werbeck, violinist and poet, and they celebrated their wedding in 1909. She moved to her husband’s home city, Hamburg. In 1910, Valborg Werbeck-Svärdström gave birth to a daughter, Marga.

Valborg Werbeck-Svärdström’s existential questions led her to the Theosophical Society in Hamburg. She became a member in 1911 and attended Rudolf Steiner’s lectures in Copenhagen in June the same year. After that, they started cooperating. Valborg Werbeck-Svärdström gave many concerts for children. On her programmes she had Swedish folksongs and Alice Tegnér’s children’s songs. She started a children’s choir in Hamburg and started creating singing exercises for children. Out of these activities grew a singing school and also tuition even for adults. Among her pupils was her daughter Marga.

In 1924, Valborg Werbeck-Svärdström met Eugen Kolisko, a musically interested physician and senior lecturer on the chemistry of medicine at the University of Vienna. He started taking singing lessons for her and their cooperation in the field of developing singing therapy started. Kolisko found the results of Valborg Werbeck-Svärdström’s singing therapy astonishing and communicated this to Dr. Ita Wegman, a foreground figure in anthroposophical medicine. The two women started cooperating with each other.

The singing school ”Die Schule der Stimmenthüllung” was established in Hamburg and the number of pupils grew. In 1928, Louis Werbeck died. In 1933, when the Nazis came to power in Germany, tuition at the school came to a halt. All anthroposophical activities were eventually banned. Valborg Werbeck-Svärdström lived for a time in Holland. When Holland became occupied, she was forced to return to Germany. She spent 1935–1936 in the Riesengebirge, that now belong to Poland. There she finished the book she had started writing earlier: Die Schule der Stimmenthüllung: Ein Weg zur Katharsis in der Kunst des Singens. Nowadays it has been translated to many languages. She moved later to live with her daughter Marga in Silesia and remained there during the war. In 1945 they were forced to flee. They settled down in Eckwälden, a small village near Stuttgart where a home for medical pedagogy had remained active during the war. There she was able to continue her work.

After the war, Valborg Werbeck-Svärdström composed two works for women’s voices: ”Die Messe” and ”Seelenwanderung. Licht und Tonterapi”. After a period in Aberdeen, she returned to Eckwälden and lived a quiet life surrounded by students and song therapy patients. There she got to know about a younger musician, music historian and pedagogue, Jürgen Schriefer, who had held a series of lectures on Wagner’s Parsifal for the Wala company in Eckwälden that produced natural medicines. Valborg Werbäck-Svärdström asked Jürgen Schriefer to accompany her and her pupils in a demonstration of healing song. She practised intensively with Schreifer for four years and in 1971 she officially handed over her singing school to him. Through his courses, lectures and private tuition, this school has since become known throughout the world and is now being run artistically, pedagogically and therapeutically by people who in various ways have been able to understand and continue developing Valborg Werbeck-Svärdström’s work.

Valborg Werbeck-Svärdström died in 1972, one year after she had handed over her school. Her burial took place close by, in the cemetery in Eckwälden. 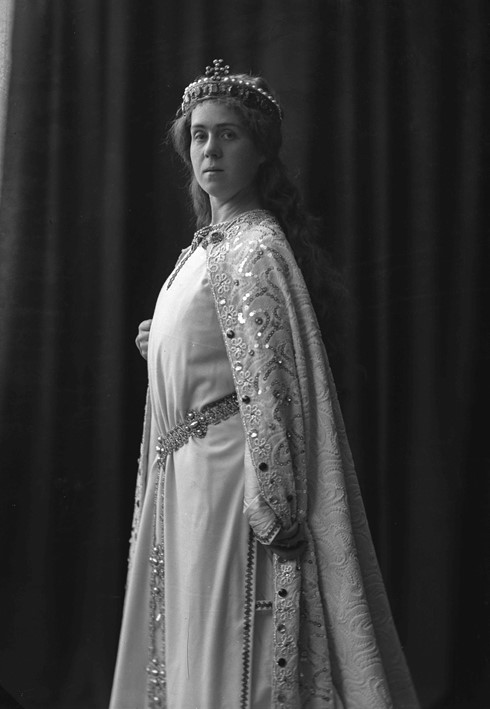 Valborg Werbeck-Svärdström as Elsa in the production of Lohengrin given at the Royal Swedish Opera, 1905. Photographer unknown (Musik- och teaterbiblioteket, Stockholm (GS128)