Valfrid Palmgren Munch-Petersen was a pioneer of public libraries in Sweden. She was also active in the women’s rights and peace movement. She also worked as an educator and a lecturer, and she compiled the first comprehensive Swedish-Danish dictionary.

Valfrid Palmgren Munch-Petersen was the daughter of Karl Edvard Palmgren and Ida Palmgren. She was born in 1877, and was the second child of three. Her mother was Jewish but had converted in order to marry. Her father’s origins lay in a poor clergyman’s and teacher’s family in Småland. However the national telegraph board trained him and he became a teacher at Mosa parish school in Stockholm. Although his ideas on education were radical, certain influential people agreed with him. With their financial support he opened a vocational school for children and young people in 1876. From 1891 it became known as the Palmgren school. It was the first coeducational school in Sweden and became much-noted for the way it combined practical and theoretical subjects, as well as for its modern language teaching methods.

Karl Edvard Palmgren believed that girls and boys should receive the same education and his two daughters were treated simply as children, not as girls. When they were little their short haircuts and the fact that they wore shorts made them the focus of attention. All three of the Palmgren children attended the Palmgren coeducational school. Their mother also worked there. As the school expanded the family’s financial situation improved and Valfrid Palmgren Munch-Petersen and her sister could participate in Stockholm’s social life.

Valfrid Palmgren Munch-Petersen graduated from high school in 1895 and then enrolled at Uppsala University in January 1896. She gained a degree in languages, philosophy and mathematics. She undertook several trips abroad and participated in language courses in Germany, France and England. In the autumn of 1900 she was at Oxford University. She returned to Uppsala in 1901 and joined the Uppsala female students’ society. She then focused on the romance languages and philosophy and gained her licentiate in 1903. She defended her doctoral thesis, entitled Observations sur l’infinitif dans Agrippa d’Aubigné, on 6 May 1905 as the 11th woman to do so at Uppsala University. On 30 May 1905 she was awarded a PhD alongside 18 others.

During her studies Valfird Palmgren Munch-Petersen intermittently worked as a teacher at the Palmgren coeducational school and it seemed likely that her future would remain in that sphere. However, due to failing health, her father sold the school and she was unwilling to teach under the pedagogical leadership of anyone but her father. This led her to ask E. W. Dahlgren, the state librarian, whether she could get a job at the Royal library. At this time it was still impossible for women to be employed as civil servants. However, after a probationary period she was appointed extraordinary assistant in the autumn of 1905. She was the first woman ever to be employed by the national library.

A few years later Valfrid Palmgren Munch-Petersen began to take an interest in the already extant public libraries in Stockholm. Upon visiting them she discovered that their quality varied greatly. She obtained a government grant which allowed her to spend four months travelling across the north-eastern part of the USA to study their public libraries. She also visited school libraries and librarian training programmes, participated in several conferences and was much impressed by the American public libraries, which were rapidly increasing in number. Upon her return to Sweden she began to push for a radical revision of the Swedish library institution. She gave talks and wrote articles in order to generate public interest in the matter and organised courses to improve librarians’ skills. In 1909 she published her travelogue Bibliotek och folkuppfostran and a pamphlet entitled Bibliotek – en ljushärd, both of which gained extensive exposure. In December 1909 she was tasked by the Ministry of Education and Research to investigate and make proposals for “government measures for the promotion of the public library”. In September 1911 her suggestions were submitted, and these came to have a deciding influence on the development of public libraries in Sweden.

Valfrid Palmgren Munch-Petersen also participated actively in the so-called Nick Carter debate in which she argued against banning children’s access to so-called dirty literature and that instead libraries containing respectable literature should be made available. In December 1911 she opened the first children’s library, Stockholms barn- och ungdomsbibliotek on Drottninggatan 65, which was funded by private subscription and partially operated by volonteers. The intention was partly to bring children from different social backgrounds together and offer them high-quality reading material, and partly to create a model library after the American example. The key word was “library spirit” and this library, which remained open it was incorporated into the municipal library in 1927, led the way for the modern Swedish children’s libraries.

Valfrid Palmgren Munch-Petersen was active in the women’s suffrage movement and joined the Föreningen för kvinnans politiska rösträtt (the association for women’s suffrage). Her stance can most closely be described as difference feminism as she claimed that men and women had different roles to perform within society. However, she argued strongly for women’s rights to gainful employment. Before the municipal elections of 1910, when women for the first time not only stood for election but also had the right to vote, she had a short political career in the conservative coalition party Allmänna valmansförbundet. She, along with Gertrud Månsson, a Social Democrat, were the first female representatives elected into Stockholm’s municipal government. They were also the first two women in such roles nationwide. Valfrid Palmgren Munch-Petersen used this position to work on behalf of building a municipal library, and she was appointed onto the Central Library Committee. Gertrud Månsson and Valfrid Palmgren Munch-Petersen also played a role in the city council’s approval of a contribution to the international conference on female suffrage held in Stockholm in 1911.

On 30 April 1911 Valfrid Palmgren Munch-Petersen married the Danish hydro-engineer Jon Julius Munch-Petersen and moved to Copenhagen with him, where she became part of the extensive and successful Munch-Petersen family. The couple had four sons together, Gustaf, Harald, Finn and Jon. They spent their summers at the family summerhouse Sølvklippen on Bornholm.

In Denmark Valfrid Palmgren Munch-Petersen continued to hold lectures on women’s role in society, on libraries, and on national identity. During the years of 1918-1936 she served as a member of the board for the Copenhagen municipal library. She was also soon taken on as a lecturer on Swedish language and culture. In 1916 she was employed as a lecturer at Copenhagen University, the first woman to be appointed there. She also taught at the Danish teaching college and at the library college. She became known to the Danish public through her radio programme “Svensk”, which aired weekly from 1926 to 1954, in which she lectured on the Swedish language, literature, and culture in general. She was fluent in Danish but always gave her lectures in Swedish.

Her teaching emphasised the need for a comprehensive Swedish-Danish dictionary and in 1926 Valfrid Palmgren Munch-Petersen began the work which would result in the publication of Svensk-dansk ordbog in 1954. Her indispensable collaborator was Ellen Hartmann. Valfrid Palmgren Munch-Petersen was also a much respected and well-liked public speaker, who spoke at various gatherings, including in Sweden. She reviewed Swedish literature in the Danish newspapers and was referred to as an “unofficial cultural ambassador for Sweden”. She became increasingly concerned with what she perceived to be a negative Danish view of Sweden and everything Swedish, and would discuss this view in newspapers and journals.

Valfrid Palmgren Munch-Petersen made a notable and important contribution to Danish society first as a board member, and subsequently, from 1941, as chair of Copenhagen’s first female student residence Kvinderegensen, which was inaugurated in 1932. She was an active member of Kvinderegensen’s management and only left the board in 1957. Her understanding of and personal involvement in the female students’ conditions and experiences was well-known.

Valfrid Palmgren Munch-Petersen began to take an increasing interest in the peace and freedom movement, particularly after her son Gustaf’s death in the Spanish Civil War. She was involved in Danske Kvinders Fredskæde (Danish Women’s Peace Chain) and Danmarks Demokratiske Kvindeforbund (the Danish Democratic Women’s Federation), which was the Danish section of the the Democratic Women’s Global federation. During the Second World War and when Denmark was occupied by German forces she actively resisted through her radio programmes in which she spoke up for peace and freedom using examples from Swedish literature. She was prohibited from leaving Denmark and became forced to go into hiding in the autumn of 1944, presumably also due to her Jewish origins. At that time she became registered under a fake name at Bispebjerg hospital and remained there until the war ended.

Valfrid Palmgren Munch-Petersen maintained her links with Sweden throughout her period in Denmark. She gave various lectures, organised a children’s library at the Baltic exhibition in Malmö in 1914, was present at the inauguration of Stockholm municipal library in 1928, became an honorary member of Sveriges Allmänna Bibliotekförening (the Swedish public library association) in 1950, and was a guest of honour at the 50th anniversary of the opening of Stockholm’s children’s and youth library held at Stadsbiblioteket (the Stockholm city library) in 1951. Further, she also regularly appeared in interviews and news reports in the Swedish press. In 1955 she was awarded an honorary doctorate from Uppsala University.

Valfrid Palmgren Munch-Petersen died in Gentofte in Denmark on 6 December 1967. 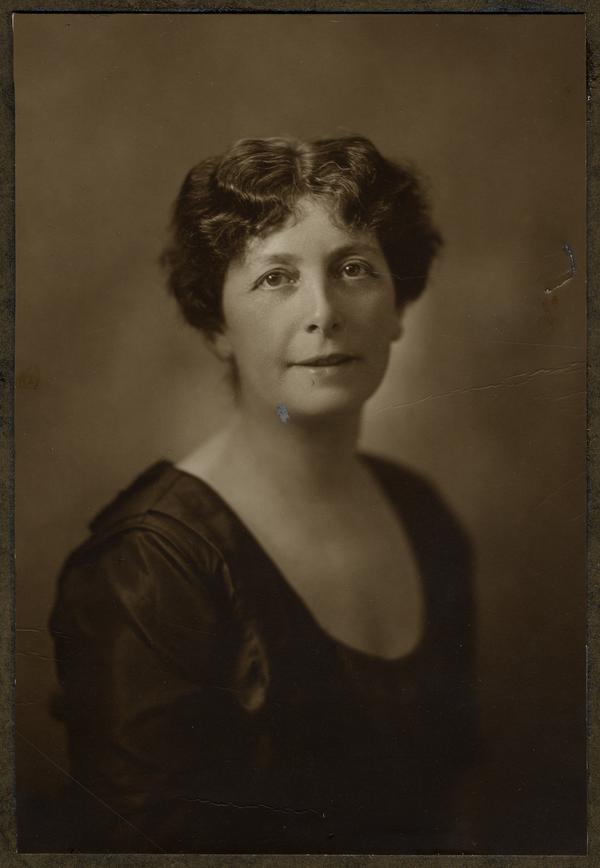