Victoria Benedictsson was one of the most influential authors of the Swedish modernist breakthrough. Her novels primarily focus on intra-marital troubles as well as the women’s issues of her day.

Victoria Benedictsson grew up on Charlottenborg farm in southern Scania. She was the youngest child in the family. As a result of her father going bankrupt the family had to move to a smaller farm when she was 13 years old. Victoria Benedictsson dreamt of studying at Konsthögskolan (the college of art) in Stockholm. However, her father forbade this even though she had managed to earn enough money working as a governess to fund her own studies.

Victoria Benedictsson developed a bone disease which left her bed-bound. It was during this period that she began to write. In 1876 she had already published a serial, called Sirenen, in the Sydsvenska Dagbladet newspaper under the pseudonym of Tardif. However, it is her collection of realistic short stories portraying daily life, entitled Från Skåne, which is usually considered to be her debut work. Once again she wrote using a pseudonym, that of Ernst Ahlgren, which she retained throughout her writing career. Following the publication of her next book, a novel entitled Pengar, the next year she became a recognised name within the sphere of Swedish literature. Some of the stories and intrigues she wrote about closely resembled her own experiences. The lead character, called Selma, wanted to be an artist but was induced into marrying a wealthy older landowner. The novel takes the form of an emancipatory novel and in the final scene Selma breaks away in order to make her way out into the world, educate herself, and become self-reliant.

Whilst Victoria Benedictsson was becoming an established author she also came to know another young author, Axel Lundegård, who was the son of the pastor in Hörby. Their relationship became definitive not only for her writing but also for her life. They would read each other’s work and provided an advanced form of “friendly criticism” which helped both of them to develop their writing. In 1885 they co-authored a play called Framåt, which was a typical modernist breakthrough play based on themes of money, love, and deception.

That same year Victoria Benedictsson was invited by Sophie Adlersparre, the grand lady of the Swedish women’s movement, to spend a couple of months in Stockholm. This was her first exposure to the literary and women’s movement factions of her day and she was ambivalent towards them. Whilst she did form a close friendship with her hostess, and with Ellen Key, she was critical towards fellow female writers such as Afhild Agrell and Anne Charlotte Leffler.

The next year Victoria Benedictsson, with some sense of excitement, made her way to Copenhagen, which was the literary capital of Scandinavia at that time. Axel Lundegård – who by then belonged to the group known as “Det unga Sverige”, headed by August Strindberg – was also in Copenhagen and introduced her to numerous cultural celebrities, including Georg Brandes, who was the most influential literary critic of the day. This relationship became another defining point in Victoria Benedictsson’s life and for her writing career. Her diary reveals that before her first meeting with Georg Brandes Victoria Bendedictsson swapped hotel rooms and rearranged the furniture in it so that he would see her from her best angle.

This initial visit occurred in 1886 and over the course of the ensuing year Georg Brandes visited Victoria Benedictsson regularly. They would speak of literary matters and of gossip, particularly about his lovers. Victoria Benedictsson was extremely in love with the man but rejected an intimate relationship with him for a long time. Her sexual experiences had been negative and intimate relations with her husband had long ceased. In fact her marriage was merely pro forma and when she lived in Hörby she paid her own way. Eventually, however, she gave in to Georg Brandes’ desire as she was afraid of losing him. Her account of their intimate relations as recorded in her diary reveals that once again it was no positive experience for her.

At this point Victoria Benedictsson was working on her second novel, eventually published as Fru Marianne, which is situated in the countryside. The lead character, Marianne, is a Swedish version of Madame Bovary. She is a keen reader of romantic novels and her marriage to landowner Börje Olsson is a disappointment. She becomes involved in an extra-marital relationship with Börje’s good friend Pål who is a believer in free love. Upon discovering that she is pregnant she, however, realises that it is her husband and her marriage which are most important to her. This novel in many ways confronted and complicated the then dominant debate on marriage vs. ‘free love’. Several of Victoria Benedictsson’s previous admirers viewed the novel as conservative in nature while Georg Brandes – who to her was the most important judge of taste – described the novel as “i altfor høj Grad en Dame-Roman” (far too much of a Ladies’ Novel) in a letter to her. Victora Benedictsson’s diary entry on the matter reveals that she took this as the death knell for her writing.

Despite this, Victoria Benedictsson did not give up on her writing. In contrast, if one goes by the drafts, major projects, and incomplete manuscripts contained within her surviving papers, one could almost say she entered into a feverish working mode. She released her second collection of short stories in the autumn of 1887, entitled Folkliv och småberättelser, which comprises several pieces which later became favourites of anthologies, such as “Mor Malenas höna” and “Förbrytarblod”. Georg Brandes reviewed this collection positively.

During Victoria Benedictsson’s final years, in addition to a series of short stories she also worked on two major works. One of these was a short story and play entitled “Den Bergtagna”. The other was the novel Modern. The former relates to her love affair with Georg Brandes whilst the latter contains elements reminiscent of her friendship with Axel Lundegård. Neither of these works were completed by the time Victoria Benedictsson took her own life in 1888.

Victoria Benedictsson left behind an extensive amount of literary material as well as a series of important biographical documents. Axel Lundegård took charge of these papers and edited and published the majority of them over the course of several years, partly in Victoria Benedictsson’s name and partly in his own name. He also used material she had left behind in some of his own work, such as in his novel Röde Prinsen. Further, his novel Elsa Finne mainly consists of slightly edited extracts of her diary. He published the novel Modern under both their names given that he completed it.

Axel Lundegård compiled no less than three ‘autobiographies’ from Victoria Benedictsson’s letters, notes, and diaries. The first was published in 1890, the second in 1908, and the third and last in 1928. Each publication included increasingly larger extracts from her diary. However, it was not until the 1980s that Victoria Benedictsson’s diary was published in its entirety. “Stora Boken” (the great book), as she called it, begins in 1882 and runs up to her death. In many ways it is a piece of literature in its own right. It initially served as a working book in which she noted ideas and stories that she had heard, but it gradually expanded into being a major portrait of a woman’s struggle to find her own worth and her writer’s voice, particularly during her time in Copenhagen.

Victoria Benedictsson died in Copenhagen in 1888. She is buried at the Vestre Kirkegård in Copenhagen. Her tombstone bears the name of her pseudonym, Ernst Ahlgren. 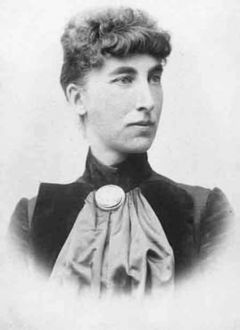